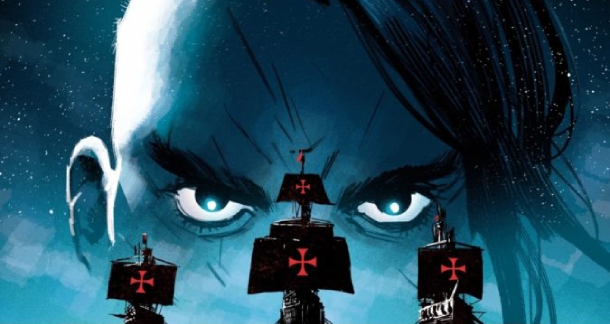 Stephen Graham Jones knows what makes us afraid because as he’ll tell you, he’s afraid of those things, too. When it comes to writing, he’s dabbled in almost every format available, with dozens of novels, hundreds of short stories, and even comic books.

His latest, the comic Earthdivers, launches us into an apocalyptic future where civilization is crumbling. All of humanity has lost hope except for a group of Indigenous survivors, who find a time travel portal. They quickly discover America was the turning point for this future-gone-wrong. One man decides the answer is a one-way trip to try and do the only thing that makes sense: kill Columbus.

We were delighted to sit down and talk with Jones about how writing comics is different from novels, the benefits of blending genres, and the lessons he’s learned along his incredible career.

Thank you so much for taking the time to talk to us today. Can you introduce yourself to our readers?

Hello, I'm Stephen Graham Jones. I write horror novels, comics, and read a lot of stories. I live in Boulder, CO and like trucks, boots, and slasher movies.

I’m so happy you mentioned comic books. Earthdivers is coming out soon, and while it’s not your first comic book experience, it’s your first comic series. I wonder if you could talk about how that process is different from writing novels or short fiction.

The way we divide up genre, it’s important to understand that the borders are permeable.

Yeah, I’ve also done some television and feature film writing, and both those and comic books are a much different process.

With a novel, or even short fiction, I’m free to write for months. It’s kind of my dream way of working. But the way TV and film works, is there’s always input at every small step. So I write a page and someone wants to read it and change it, and then I can write the next page. And comic books are a mix.

There are so many stages to comics. I’ll write the script and the editors will comment and leave notes for me to change. And then it goes to the artist, where they create thumbnails of what the layouts could be. I’ll go back and forth with them for a while before they do pencil drawings. Then we’ll adjust those. By the time it goes to the inks, it gets a lot harder to adjust. The next stage is the coloring and lettering. There’s a surprising amount of malleability in those two stages, especially the lettering.

So, to give you an idea of the process, Earth Divers issue one is coming out, but I’ve already written the first six. At any point over the last three or four months, I’ve been knee-deep in issue two, have my hands in issue five, and we’re still doing edits on issue one. It’s interesting trying to maintain all those things at once.

Wow! I had no idea the process was that complicated. Leaning into your expertise a bit, what advice would you give a new writer on the ‘dos’ and ‘don’ts’ of publishing?

The first piece of advice would be read outside of your genre. I mostly write horror, but I read across the spectrum of nonfiction, popular fiction, and science fiction.

I think if you write horror and only read horror, you risk the process becoming kind of insular. Your references are only to the things other people have written or done inside that genre. Whereas, if I read a book on botany, then I might come up with a different kind of plant that I can use in horror, or a different growth cycle, or something like that. I love to bring strange DNA back into horror, and I think that’s what keeps any genre—or species—vital. If you keep using the same DNA, you get tired and go extinct. But if you keep smuggling new stuff in, then it keeps plugging along in new and interesting ways.

No genre is only that genre. A Western is not just gunfights and horses, because there will be a romance angle, action scenes, maybe even some horror. The way we divide up genre, it’s important to understand that the borders are permeable.

It's also a good angle for query letters. When you do a mashup or list your comp titles, I think it’s always good to pick from two different genres. The idea is to show what other books would be on the shelf alongside yours, but if you pick a horror book and a science fiction book, the agent can decide where it should land.

That’s fantastic advice. What about what not to do?

Don’t try to be smarter than you are. I’ve done that on the page, and I see that so often from debut writers. Their first book they want to show—and I say they, but I’m really talking about me—they want to show how smart they are. It's easy to go back and edit your book to make yourself look smarter. You want to make your name, but direct and simply is always the way to go.

It’s not about whether people think you’re smart, it’s about whether the story provokes an emotion from them. That has to be your real goal, and you’ve got to do whatever you can to make that happen.

Also remember, if you get published when you’re thirty, you’ve had years to write that book. But your next novel will have a deadline, so it’s a lot more pressure. 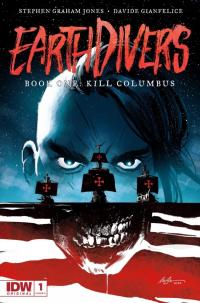 There can be a lot of pressure in publishing. Especially when it comes to writing to trend or feeling like you have to write prolifically. Have you ever experienced that darker side of writing?

Oh yeah. When I wrote my second published novel, All the Beautiful Sinners, I didn’t have a lot of publishing weight to throw around in contract negotiation. So, I had to sign a contract where the publisher had chapter approval, which meant every chapter I wrote I had to mail off and they’d mark it up before I could write the next chapter. It was a terrible way to write a novel and I do not recommend it at all.

That does sound terrible, but you’ve had an amazing career since then. Has your perspective on writing changed?

I believe that any text is not complete until it has a reader. At the same time, I think you can get satisfaction just from the creation of art, from doing good art and good work. That can totally be enough.

I’m not the first person to say this, of course. The first person I heard it from was Vincent Carrella. He wrote Serpent Box, which is an amazing novel that everyone should read. When I first heard him say that I thought no, that’s wrong. I have to get on the shelf, but as I’ve gone through my career, I realize that he was actually right.

With horror, you can sometimes get raked over the coals if you don’t go far enough or if you go too far. But you have to remember that readers have different thresholds, and people come to stories for different reasons. You might not satisfy everyone out there, but you might really satisfy one or two people. And that can be enough.

Not everything has to be timeless literature. There’s disposable lit, and even though people turn their nose up at it, it is just as hard to write. It takes a skill level that isn’t any less than the skill required to create timeless art. It’s just a different skill set. I really respect those writers because it’s not easy and I wish I could do more of it myself, actually.

This has been amazing. Before we go, can you tell our readers what’s next for you?

The Babysitter Lives came out last month, so that feels like it’s still happening. Issue one of Earthdivers comes out in early October, and every month there will be more issues released. Don’t Fear the Reaper, the sequel to My Heart is a Chainsaw, comes out in February. And then I have another novel that I can’t talk about, yet.

Get The Babysitter Lives at Amazon