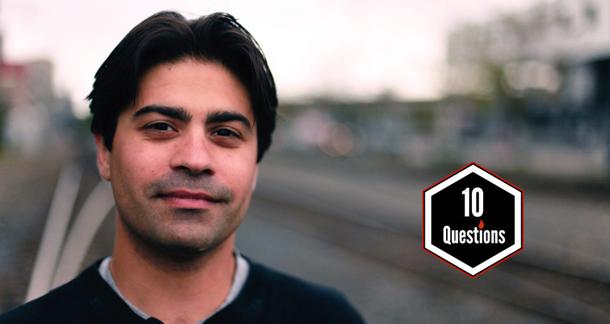 What if upon the publication of your first novel, you were compared to Cormac McCarthy? I know, a lot of novelists are compared to the grim Nobelist in waiting, but ask yourself, how would you react? Would you be ecstatic? Or would you feel like it was a burden? Or what if the most widely read and influential novelist of the 20th century praised your work, how would that make you feel?

Urban Waite knows the feelings both of these things provoke. He’s been compared to McCarthy in more than a few major critical outlets, and he’s had Stephen King reap praise upon him, and I’m here to tell you, all of it is justified. But make no mistake, Waite writes entirely with his own voice. His three novels—The Terror of Living, The Carrion Birds, and the newly released, Sometimes The Wolf—are brilliant explorations into the desperation created by the modern world, filled with the breakneck action of white-knuckle thrillers, but with a keen literary depth rarely seen in such novels.

Simply put, Waite is an exceptional talent, and I’m positive within the next decade, new novelists will be compared to him and they will know how the weight of such a comparison feels.

You’re bringing me back. I think it might have been a little two-pager I wrote for a class in college. Something about a truck stop convenience store in the middle of America. A boy clerk and the girl who came to visit him during his shifts. The sound of eighteen-wheelers going by in the night—I don’t know. It was all very ethereal, nothing really happened. I came into writing through poetry and there was a lot I was trying to do in a minimal sort of way. I remember really liking the feel of putting that story together, the problem solving, and trying to make it all work. The instructor ended up selecting it for a class anthology with some of the other student work. I think I sent my parents a copy. I wonder now if they still have it?

Misfortune happens to all of us, it’s just a matter of how we deal with it that will save us or sink us.

I write only in human blood, usually my own. But in a pinch I use a computer. And I get up early.

It’s all a big mistake. And I think that’s a good thing. I don’t believe in perfection. I try to do the best I can with what I have and then I go back over it and I try to do it better. Sometimes it doesn’t work. Other times it does. It’s never perfect but I try to get it there.

Morgan Drake. He’s a stubborn old man in Sometimes the Wolf who likes to sit out on his cabin porch and watch the sun as it comes across his land. He doesn’t say much and that seems very good to me.

Relief isn’t the right emotion for the work. I get really restless if I don’t have something to work on. I’m definitely all up and down the emotional scale with every project, but I’m at my lowest when I’ve finished something and don’t know what to start on next. So… catharsis? It doesn’t exist in my world.

Seattle Mystery Bookshop, Elliott Bay Books, Powell’s, and pretty much any town I find myself in. I get around, as they say (or in this case, as I say about myself). But I mostly enjoy buying used books. For someone who depends on book sales I’m kind of weird this way. I like to see what past readers dog eared, or underlined, or to see a coffee stain on the page I’m reading and wonder where and when the book was opened and who was reading it.

I don’t believe in bad reviews. If someone is taking the time to put their opinion out there I take it seriously. I read all the reviews. I learn from them. My job, as someone who creates characters, is to look at all kinds of different perspectives. In short, I keep an open mind. Usually if someone has a problem with what I’m writing I can see where they’re coming from, the real value to me is wondering how they got there. As a writer not reading the reviews or attempting to understand the people around you feels to me like self-sabotage.

Don’t take advice or— as in the previous question—listen to reviews. If you want to be a writer then learn to have your heart broken a little every time you put something out in the world. People are going to disagree with you. Try to figure out why. Sometimes you come to the conclusion that they’re just bullshitting you, but you have to come to that conclusion. I’ll be real Zen here and sum up my argument by giving the advice: the journey is the destination.

In your three novels—The Terror of Living, The Carrion Birds, and the just released Sometimes the Wolf—you’ve written about good men driven to desperate situations. What attracts you to write about these characters?

The difference between a good day and a very bad day is as simple as taking the wrong turn down an unknown road. The point being that none of us know what will happen in our futures and we just try to do the best we can with it. These are the characters I like to work with, because it really is as simple as that. Misfortune happens to all of us, it’s just a matter of how we deal with it that will save us or sink us.

Steven Schwartz from Chicago is reading The Fever by Megan Abbott October 22, 2014 - 7:29pm

Good stuff,bro.  Waite is the real deal and look forward to his latest.