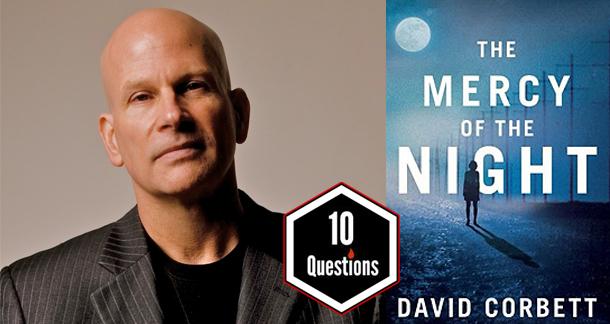 A new novel from David Corbett is a cause for celebration, so I hope you all have your party hats ready. I was first introduced to David when I started working for MysteriousPress.com, which was putting out his backlist as eBooks. I generally try to pick up at least one book for each of our authors so I can familiarize myself with them. So I read The Devil's Redhead, his first, and was blown away.

His prose sizzles and his storytelling is precise, but what stands out most are the characters. He brings an incredible level of complexity and depth to people who, in the hands of a lesser writer, would have been cardboard cutouts masquerading as humans. Corbett isn’t concerned with playing it cool or showing off—he’s interested in moral truth, in emotional honesty, and that’s what makes his work special.

On top of that, I found out he's a really nice guy, too.

Now, I'm lucky to work with David in two roles—he's also one of our regular instructors here at LitReactor, teaching the wildly-popular The Craft of Character. It's so popular, in fact, that we've expanded it, with The Craft of Character II, which is now enrolling (and you don't have to have taken the first class to take this one).

Given the release of his latest novel, and the new class, we figured it was time for the 10 Question treatment. So check this out, and then flee to your favorite book-buying outlet to pick up The Mercy of Night.

I wrote a script for a Davey Crocket episode when I was in the fourth grade. (The TV show starred Fess Parker and I was a big fan.) My dad typed it up with carbon paper so I could hand out copies to my friends who played the various parts. I assume (hope) it is now buried in some landfill, never to be seen again.

This is somewhat telling, but I’m one of those people who tend not to celebrate good fortune. I feel like I’m just inviting the Fates to get even.

The men who had the greatest impact on me were, with the exception of my father, all teachers. I like to think I’m giving back.

However, I do remember celebrating the first time my late wife, Terri, and I won a motion we submitted to the local probate court. It was a big deal, and Terri’s first litigation as a lawyer. I put on the final movement from Pictures at an Exhibition by Mussorgsky and cranked it.

I get up early, around 5 AM, do the dishes and make myself a pot of tea, then sit at the computer and do NOT look at email until after 10 AM. If the writing is going well, I put it off even longer.

I do a lot of background work — outlining, plotting, spitballing, etc. — just so I get the story in my bones. Then I “improvise” as I actually write, letting my imagination and unconscious drive the bus. I let things develop naturally, knowing I’ll fix anything that’s wrong or thin or overblown in the rewrite process.

Revising as I go along. Only now, six books in, am I allowing myself to “write badly” until I have a complete draft down.

I told the story of my own failure to realize I was “trapped in my Golden Moment.” The reason I was trapped was because it wasn’t just my best moment, it was my worst. My first wife died of ovarian cancer at age 46, and I was probably never more loyal, devoted, or caring than I was during the final days of her life. But that didn’t change the result. And so, unconsciously, I became a kind of crisis junkie, trying to help people out – women stuck in bad marriages, in particular — rather than simply moving on with my life. By getting that down on the page I think I managed to put the whole thing behind me a bit more securely.

Ah! I’ve got it. Artie Wu and Quincy Durant from Ross Thomas’s Chinaman’s Chance. (They also appear in Out on the Rim and Voodoo, Ltd.) They’re con men and adventurers who seem like basically decent, down-to-earth guys. With a wicked streak, and some incredible stories to tell.

I can’t walk out of Book Passage in Corte Madera or City Lights in San Francisco without buying something. The shelves sing to me. I’m helpless before their song.

Given the illegal nature of homicide, I try to take a philosophical approach. I’ve only gotten a couple really bad reviews, and they were so vituperously ill-considered they actually made me look good. Sometimes a one-star review can be a good thing, if it’s from a cranky knucklehead.

I like the distinction between authors and writers, with the presumption “advice” only flows one way. I’d have to say anything an “author” tells a “writer” would probably best be forgotten. But I realize that’s not what you’re asking.

I think the general sanctification and genuflection before “the reader” has begun to grate. Not because readers aren’t important – as I say in The Art of Character, anyone who “writes for himself” is scribbling to a ghost. It’s just that there is no single “reader” to please. I do think you have to keep in mind someone you respect, even admire as a potential reader, so you raise your game to his level of appreciation. Shakespeare wrote for kings. Shaw wrote for philosophers. Joe Chaikin never went on stage without imagining that Martin Luther King, Jr. was in the audience. That’s valuable. But writing down to the average sixth-grader in the name of respect for the reader is the kind of thing only an unmitigated asshole can say with a straight face.

WILDCARD: You spend a lot of time teaching, and you've written a definitive guide on the art of writing characters. What attracts you to teaching, and what do you get out of it as a writer?

The men who had the greatest impact on me were, with the exception of my father, all teachers. I like to think I’m giving back. And my moments of greatest appreciation are often when I hear a student say that my class gave her a whole new outlook or a bundle of new ideas, and she can’t wait to get back to her story. That’s how I felt when I was in a classroom with one of my own favorite teachers, and it feels incredibly rewarding to inspire someone to work all the more passionately at what they love.

The thing I get out of it as a writer is a deepening appreciation for the things that make fiction come alive on the page: character, story, setting, voice. I have a much more profound respect for those simple elements, and my own deepening understanding of their inescapable importance has made me a better writer.