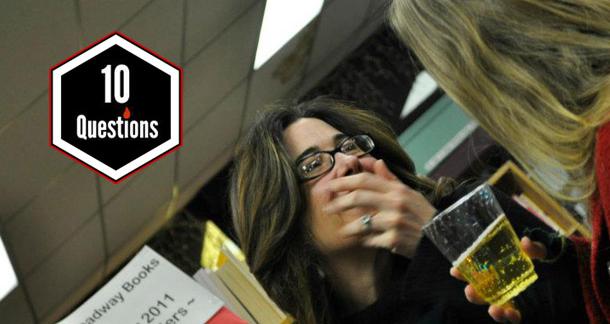 It’s no secret that Portland, Oregon is having a cultural moment. Whether we’re talking home brew or Portlandia or the thriving literary community in this overgrown Pacific Northwest town, you can’t scan a Twitter feed without stumbling across a reference to the Rose City. Since 2002, one of the brightest spots in Portland’s literary horizon has been Hawthorne Books, helmed by the talent magnet, Rhonda Hughes.

Rhonda’s authors win awards, the hearts of their readers, and in some cases, attract the attention of the big guns in New York, as well as Hollywood. Beyond the superb writing inside the covers, as objects Hawthorne’s books offer “meticulous design and typography, acid-free papers, sewn bindings, and bookmarks engineered into the cover flaps. The writing is meant to last; so is the book.”

We caught up with Rhonda the other day, fresh from another author book launch party—this time for Gregory Martin’s Stories for Boys—and she was kind enough to agree to answer some questions about the indie pub world, and her place in it.

What was the first book you published, when was it, and what has happened to its author?

Things I Like About America: Personal Narratives, Poe Ballantine, 2002. We are still working together, and Hawthorne is publishing his fifth book, Love & Terror on the Howling Plains of Nowhere (Sept 1, 2013). He is our house author, our own Charles Bukowski. But, and this is important to state, he drinks nowhere near as much as Bukowski did.

When you get a manuscript submission that turns you on, where do go to read it?

How do you decide what to publish—what’s the acquisition process like at Hawthorne?

When a manuscript turns me on I publish it. I have to fall in love with the work. Our acquisition process is pretty simple: A writer or agent submits a query, then the manuscript, and, if once I start to read I don’t want to stop, I know I have a winner.

What's the biggest mistake you've made as an editor?

Knowing in my gut that the writer’s chosen book title would provide an obstacle to sales, but letting the writer keep it out of a misguided sense of artistic respect. I’ve learned that ultimately the highest respect I can pay an author is to follow my gut and give their work my all in order to build an audience for them.

Let’s talk about covers. We’re not supposed to judge, right? But covers seem more important than ever. What’s Hawthorne’s take on that?

Just the facts, ma’am: Books are judged by their covers. It’s one of the most important sales tools. To be more precise it’s the quality of the book, the paper, the binding, the smell of ink as well as the cover design that creates brand identity and generates sales. Our brand is known for its unique double scored flaps and nonscuff matte lamination.

Since the beginning, Adam McIsaac has been Hawthorne’s graphic designer across all platforms, print and digital, and he has developed an aesthetic that has come to define our books. This is especially important for selling “emerging” authors. A buyer may not be familiar with a debut writer, but they will be familiar with Hawthorne and willing to buy based on their experience with our books.

What book out in the past 10 years would you have given up wine for a year to have published?

Nothing on the planet could make me give up wine for a year, but I’ll play along. Wild by Cheryl Strayed.

Where do you sell most of your books?

We are distributed by PGW/Perseus, so most of our books are sold at Barnes & Noble and the Indies, especially Powell’s Books and Broadway Books here in Portland, as well as Elliott Bay, Tattered Cover, Prairie Lights, and others. A much smaller percent are sold through Amazon.

How do you handle bad reviews of your authors’ books?

What's the biggest lie out there about publishing?

Perhaps that one can make a living in this industry either as a writer or small publisher. Most books do not make profit. The business model is that there is only a profitable few that supports the entire catalog.

WILDCARD: What’s the best meal you’ve had in the last year?

Graffiti Food and Wine Bar in New York. One of my favorite literary agents, Mary Evans, took Kevin (my husband) and me there, and we were told that David Byrne is a regular, although he didn’t make an appearance the night we were there. We had small plates:

Suzy Vitello’s young adult novels include Jr. Library Guild pick The Moment Before, The Empress Chronicles and The Keepsake. Her first novel for adults, Faultland, debuted March, 2021. Her award-winning short fiction and nonfiction has appeared in The Rumpus, Mississippi Review, The Southampton Review and various anthologies and other literary journals. She has been a prize winner in The Atlantic Monthly Student Fiction Contest, The Frank McCourt Memoir Prize, and has been a recipient of an Oregon Literary Arts grant. She lives in Portland where she writes and works as a book coach and editor.

Class Director
Rob from New York City is reading at a fast enough pace it would be cumbersome to update this December 11, 2012 - 1:23pm

Rhonda has excellent taste. Graffiti is one of my favorite restaurants.