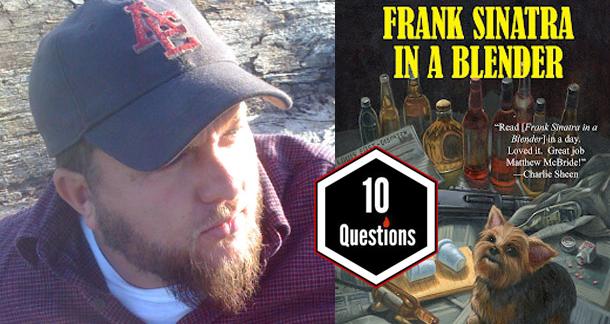 Sometimes a book sells you solely on the title. Frank Sinatra in a Blender is one of those books. I mean, c'mon.

Turns out, the prose hits just as hard as the title. The debut novel from Matthew McBride is about St. Louis-based PI Nick Valentine, a wrecking ball with an inhuman tolerance for alcohol and pills. He's investigating a robbery, and like with any badass pulp story, all kinds of stuff goes wrong.

This was easily one of my favorite books of the past year, and as an added bonus for crime fiction aficionados, it includes an introduction from mad Irish crime poet, Ken Bruen.

I was in high school; I think it was tenth grade. We had to write a short story and it had to be at least three pages long. Our teacher was going to read them out loud, in front of the class. We had a week to write it, and of course I waited until the night before it was due to start writing. The story was called Of Unsound Mind, and it was sixteen pages long. It was about a guy in our small town who was going around breaking in people’s homes at night and chopping them up with an ax. There’s even a scene where my protagonist attempts to flush a man’s finger down the toilet. I’m going to go out on a limb here and suggest it was the most original story we heard. And my teacher was really cool about it—because it was pretty hardcore. Who knows what might happen if a kid wrote something like that in class today. They might call the cops. And perhaps they should.

Anyway, I still have that story. It’s on my desk, right beside me.

Sometimes I think the worst advice ever given, though it is a standard, would be that old chestnut: write what you know. Other times I think that actually makes sense, because a lot of things I’ve written about come from things I’ve done, or almost done. Or wished I hadn’t done.

With a huge bag of Afgan Kush. I really didn’t celebrate. It was a story for Deer & Deer Hunting Magazine, and they waited so long to actually publish it I’d forgotten about it. They accepted the story in 2003, but it didn’t come out until 2007. One day I just opened the mailbox and saw the envelope and thought what the fuck is this?

I wrote my first manuscript in longhand, in seven different spiral notebooks, and that was the way I wrote everything until just a few years ago.

The truth is, I’d never used a computer before in my life up until that point. I wanted to avoid them, sometimes I still do. But they are necessary, so that’s how I do everything now. I don’t take memos or carry a notebook. Because that seems like too much work already, and I feel like that would complicate the process for me. So I just sit down and peck, and whatever I need seems to be there when I need it.

Though I have made many, the biggest, I guess, would be the fact that I wasted so much time trying to get my very first manuscript published and I didn’t write anything else. After I’d taken it as far as I could, I should have started writing something new and just moved on to the next project. But I didn’t. For years I could have been finding my voice and learning. But I felt like I had to see that first book published, otherwise what was the point?

Another thing I’ve always done—though never considered it a mistake, but now do—would be to throw away and burn and delete so much material. Sometimes I hate what I write, for a while anyway, so I’ve learned to hang on to things. Now I save everything compulsively. You never know when you can dig something out of the vault and use it later.

I love music, but not when I’m writing. I cannot imagine how a distraction could help anyone concentrate. But I know it does. Some writer’s swear by it. I’ve even went so far as to use earplugs when I write—but then, when you take them out, you have super hearing. Like you can hear everything, even dogs barking at the neighbors house two miles away. That’s more distracting than the music. I just try and find the zone, do whatever it takes to get there, then stay there for as long as I can.

Why, Nick Valentine, of course. Because he’s exactly the kind of guy I’d want to hang out with at a bar. He’s wild and nutty and completely unpredictable. He starts fights and shit. He’s out of control, with a tolerance that knows no boundaries. Plus he carries a shotgun, a chainsaw, and a bottle of Oxycontin. I can think of no one better to drink with.

Anything new, especially if someone I know wrote it, comes from Amazon. There’s a Barnes & Noble forty-five minutes from our house and I have bought books there on occasion, but in the end, I never underestimate the randomness of a thrift store—or a Goodwill—because that’s where I buy a lot of books. Over the summer I found fifteen Elmore Leonard books at Goodwill, and most of them were first editions, some signed, but all of them only a dollar. Old ones like Freaky Deaky and Killshot. The thing is, sometimes people who love books die—and people who don’t love books, usually family members—inherit them. And because they feel too guilty throwing them away, and it’s too much work to have a garage sale, they donate them.

So you never know what you might find. But I hate to tell people about that because I feel like it’s my secret place. Like I’m the only one out there who knows about Goodwill. You might not think of Goodwill as a place to find books, but I assure you it is. I’ve found Bukowski, Ellroy, Crumley, Palahniuk, Pelecanos — the list goes on.

To even consider reading a review of your work is just asking for trouble, so I try not to read them. I know everyone says that, and sure as shit many are lying, but I don’t read them unless I stumble across them. By that point, where something I’ve written is being reviewed, my goal is to be buried as deeply as possible in the next writing project. I’m sure I get them, but the only one I’m really aware of, and actually, its not even that bad, is from someone on Amazon who complained about the extreme language and they docked me a star—which is fucking frustrating—but that’s their opinion so I’ve got to respect it.

Sometimes I think the worst advice ever given, though it is a standard, would be that old chestnut: write what you know. Other times I think that actually makes sense, because a lot of things I’ve written about come from things I’ve done, or almost done. Or wished I hadn’t done. But the best advice should always be: write what you want. There is an abundance of writing advice out there, some good and some bad. You just have to find what works best for you. Because, really, all advice is both good and bad. In my mind, writing is about freedom. AND THERE ARE NO RULES. Write what you know. Write what you don’t know. Just always be writing something.

WILDCARD: Frank Sinatra in a Blender was published with Concord ePress before it was picked up by New Pulp Press. Why did you put it out with them first, and did it help generate the interest that got the book picked up by NPP?

I wrote the first draft of the book during the winter of 2010 and there was never much thought as to where I would submit. I only had one goal: write the kind of book I’d want to read. With that in mind, I wrote my book. Though there are some scenes that are so crazy, I remember thinking, there’s no way anybody will ever publish this. But then I just plowed ahead anyway. I think that’s what being a writer is all about. It’s about being true to your characters and writing with your guts. If you think, oh, so-and-so publisher will never like this book, then you’re just cutting your own throat with a pocketknife.

I submitted to Concord because they were just gearing up to publish eBooks and I liked what they were all about. They weren’t afraid to take chances, and the advisory board has writers like Stona Fitch, Megan Abbott, Russell Banks, and Joyce Carol Oats, a lot of big named authors who’d be reading my book. It was a great experience for me and I’ll always appreciate them taking that chance.

There has been considerable interest generated for the book, for which I am sincerely grateful. For a novel that began life as an eBook only, it has developed a much bigger audience than I’d ever anticipated. The best thing a writer can ever hope for is that people who love their book will talk about it and spread the word, and a lot of readers have.

I suppose Charlie Sheen tweeting about it to millions of people didn’t hurt either.

R.Moon from The City of Champions is reading The Last Thing He Wanted by Joan Didion; Story Structure Architect by Victoria Lynn Schimdt PH.D; Creating Characters by the editors of Writer's Digest December 4, 2012 - 10:09am

Am fucking excited about this. Gonna order this and a huge bag of African kush.

Ben Freeman from Charlottesville, Virginia is reading everything I can December 5, 2012 - 7:34am

Great interview, can't wait to dig into this one. It sounds right up my alley.