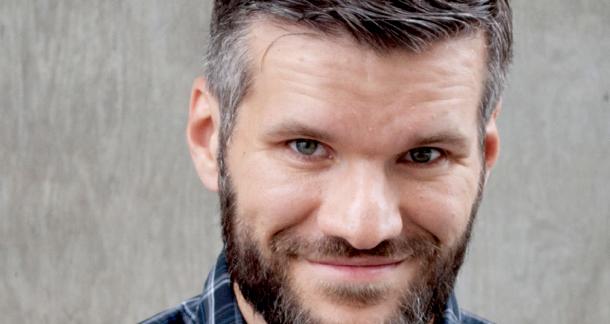 When I first started reading Matt Bell's first short story collection, How They Were Found, I almost thought of him as a literary chameleon. Each story was radically different from the next as far as genre was concerned, ranging from surrealism to noir. But despite the variances of genre, his voice remained strong and distinctive (which, if you’re the type of writer who enjoys genre hopping, you know how difficult this is to maintain).

Then when I read his debut novel, In The House Upon The Dirt Between The Lake And The Woods (which wins the biggest mouthful of a title award), I was shocked not only by the intense violence of its imagery, but by the raw emotion he conveyed as we watched helplessly as a young couple’s marriage unravels in the most disturbing ways possible. It was easily one of the most distinctive novels of 2013, and as far as the voice was concerned, Bell seemed very at ease with it, and it seemed that he had found his niche.

However, with Bell’s latest novel, Scrapper, he is once again proving himself to be a literary chameleon who refuses to be cast in a single mold. Yes, Scrapper has the same strain of violence running through it as In The House Upon The Dirt Between The Lake And The Woods. Although, in my opinion, Scrapper is a far more humane novel. And the settings, of course, are radically different. But at its core, Scrapper is as much a love letter to the Detroit of old as it is a literary thriller.

Anyway, I’ll shut the fuck up now, enjoy the interview.

I wrote my first "real" stories when I was nineteen or twenty, I think, although I'd been writing off and on at different parts of life. For instance, in the summer after seventh grade, I wrote a draft of a fantasy novel using the default DOS text editor, which was the only word processing software I had. I still have a hard copy of that somewhere, which is thankfully the only copy in existence that I know of. But perhaps the first story I ever wrote was one I wrote when I was very young, called "The Cave": My mom recently sent me the only existing copy of the story, which I'd completely forgotten, and it turned out to bear a lot of superficial similarities to my first novel, In the House upon the Dirt: A man goes into a cave, explores a maze, changes shape several times by supernatural means, then fights a giant animal to earn his escape.

Your book is never as bad as your worst critic says—but that also means admitting it's probably not as good as your biggest champion says either.

I wish I remembered! My first piece of published writing appeared in a now-defunct online magazine, sometime in 2004, I think. I'm sure I rushed to tell people, but I couldn't tell you who or how it went. I'm not as good about celebrating accomplishments as I should be, sometimes, but not because I don't care. I think mostly those sort of moments just feel sort of surreal. There's still a part of me that doesn't believe any of this is really happening, that doesn't believe the stories I'm making up in my office every day are actually being read by strangers out in the world.

I get up in the morning, work for a bit, take a break to exercise, then write until lunch or so. Day in, day out, usually in my home office—I've never been someone who can write in coffee shops or other public places. It's not a very thrilling routine, but I think that's almost the point: The extraordinary normality of the routine creates a steadiness that allows a lot of weirdness on the page. As soon as I get into the space, my body and brain know what they're supposed to be doing.

I don't know if I've made any catastrophic mistakes, career-wise, but I probably sent a lot of work out too early, in part because I just couldn't see yet how far I still had to go to become the writer I wanted to be. Looking back, I feel like there's really no reason to learn to write in public—but at the same time, some of the early feedback and encouragement I received was probably crucial to my continuing to write, so even that isn't the worst thing.

I'm not sure I think about writing in this way, but I think there's a part of every book that is about trying to move toward some strong emotion, instead of escaping from it. That, for me, is part of what defines literature: literature is fiction that brings you closer to your life instead of taking you away from it. For me, Scrapper is in part about the cyclical relationship between fear and violence, and about whether it's possible to move past the parts of your past that you believe define you most. If there's any catharsis in the result of exploring these kind of topics, it's the odd joy of having tried to honestly face something it would be easier to look away from, of trying to be honest about the world I live in. There's something powerful about doing your best to depict the world the way you feel it really is, instead of extending certain false stories we're normally asked to agree with.

I think most of my favorite fictional characters are people whose sudden presence in the bar would be a good reason to drink up and leave.

I buy books anywhere and everywhere. I've been lucky to live recently in places with great independent bookstores—Nicola's and Literati in Ann Arbor, Snowbound Books in Marquette, Poisoned Pen and Changing Hands here in the Phoenix area—but I buy books elsewhere too. I have a different relationship to the site now, but when I was first starting writing in rural Michigan in the early 2000s, even Amazon was a game changer for me: There wasn't anywhere local I could buy most of the books I wanted to read, especially experimental and translated literature, and being able to order them so easily online was an amazing thing. I do try to buy a lot of books and literary magazines directly whenever possible, as my own days working in publishing really educated me on how much that financially helps the publisher.

The thing I try to remember is that your book is never as bad as your worst critic says—but that also means admitting it's probably not as good as your biggest champion says either.

I know there are a lot of ways to be a writer, but I think telling aspiring writers that they don't have to keep a writing routine or write "every day" is doing them a disservice, especially at the beginning, when the writing muscle is still developing. (And it's always still developing, so…) I feel the same way about anyone who says they don't read fiction while they're working on their own. Almost all of the writers I admire write on some kind of rigorous schedule (even if they take long breaks between projects) and without exception all of them are voracious readers of a wide variety of different kinds of books.

Since Scrapper is set in Detroit and is in many ways as much a character in the novel as your protagonist, Kelly (which in 21st century terms makes you an expert on the subject), do you believe that Detroit will ever be able to recover from its current state of decay and neglect?

For what it's worth, I'm not sure "decay and neglect" is the overall state of contemporary Detroit. The city certainly has its difficulties, many of them not caused by the city's current residents but by past white flight and racism, by the collapse of the auto industry, by those same companies keeping their polluting manufacturing in the city while moving their headquarters into the suburbs, and so on. It's an incredibly complex place. It's the only city in America to have had over one million residents and then dropped back under that milestone, and certainly there are lots of empty and abandoned buildings and sparsely populated areas. Having the infrastructure for millions of people but a much smaller current population creates all kinds of problems. But there are so many vital areas of the city still, so many resilient and creative people living and working there, and I'd like to see those communities celebrated more in the news.

In many ways, what causes some of Kelly's problems in Scrapper is his inability to recognize and join those communities he encounters. He's set himself apart in a number of ways, and his apartness and difference prevents him from getting some of the help he needs. He also inhabits a certain mythic version of Detroit, amid the "decay and neglect" you mention, but that certainly isn't the only version that exists. I have a lot of faith in the resiliency and determination of the people who love the city most, and I hope we hear more of their stories more often.