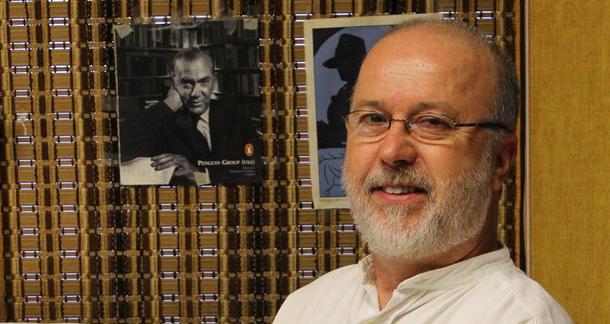 There are certain writers whose work comes with such rarity, that it’s almost cause for celebration whenever they publish a new book. For literary fiction, it’s folks like Thomas Pynchon, James Salter, and Marilynne Robinson. With horror/weird fiction it’s Robert McCammon and Thomas Ligotti. With crime fiction it’s James Sallis, Daniel Woodrell, and Lynn Kostoff. In the past twenty-five years, Kostoff has published four novels—A Choice Of Nightmares, The Long Fall, Late Rain, and his newest release, Words To Die For—and each has been as different from the last in tone and structure, but each has been a master class in the art of crime fiction.

My first two publications were in the same issue of an undergraduate literary magazine at Bowling Green State University. I can’t remember either title, but I remember very vividly the two writers whose works were a big influence on an impressionable twenty year old. The two stories owed a huge debt to Larry McMurtry and Leonard Michaels. I loved McMurtry’s work because I came from a rural and farm background, and he seemed to give license to write about what I knew firsthand. I remember being completely overwhelmed by Leonard Michaels’ signature style, and his influence fit the second half of my life: the wet behind the ears farmboy who saw college as a world unto itself full of opportunities to immerse himself in reading literature and philosophy and trying to learn how they fit and fed into his desire to be a writer.

I switched from Pabst Blue Ribbon to Miller High Life until the royalties ran out.

I think it’s important to accept bad reviews as part of the territory of being a professional. I don’t believe any serious novel, short story collection, cd, painting, or film can ever please everybody.

My process: messy and exploratory. When I start thinking about a novel, I fill eight to ten composition notebooks with rough notes, character sketches, and potential scenes and eventually sort through them in an ‘audition’ of sorts: something along the lines of what if Character A was a close friend of Character C who eventually betrayed Character D, then how would that affect Character B who might or might not be the protagonist. Once I get a feel for some of the dynamics among the characters, I start writing opening paragraphs, trusting to instinct that one will be the gateway to the novel. Once I have that, I write two drafts in longhand using hardback 12 by 8 inch ledgers, and then I word process the draft, print it, and edit with pen, finally going back to incorporating those changes. For each novel that averages four to five drafts.

Probably my biggest mistake was a bad and chronic case of carelessness. As an apprentice novelist, I was obsessive about learning my craft, but during several difficult upheavals in my personal and professional lives, I lost a couple novels (this was pre-computer days where a ‘backup’ draft was a Xeroxed copy); I lost a work-in-progress I had spent a year and a half on about an air traffic controller who sets up the perfect murder by orchestrating a mid-air collision between two jets. I have no idea where that one is. The same is true for two very early versions (1990’s) of the novel that eventually became Words To Die For. Recently my father called and told me he found a copy in our attic of a novel I evidently wrote in my early twenties and forgot about: A November Which Was Unusually Wet. I don’t plan on revisiting it (don’t need the personal embarrassment); it is an apprentice novel that hopefully helped me to move on to my later ones.

Most of my friends and I were living very, very close to the bone in the 80’s, and the country felt like it was working overtime to separate the Haves from the Have-Nots. It was difficult to hear about ‘Trickle-Down’ economics or swallow the convoluted hypocrisies of the Iran-Contra Affair (as well as choking on what passed for culture, pop or otherwise, in the mid-80’s), so Words To Die For was an attempt to capture the character of the culture at that time. In many ways, it feels like we have begun living under its long shadow again.

I would probably enjoy having a couple beers with John Yossarian from Catch 22 or Marlow from Heart of Darkness; they’re two characters who are close to my everyday temperament.

There’s a great independent bookstore called Litchfield Books in Pawleys Island, SC that’s one of my favorites; at home in Florence, SC, we have a brick and mortar Barnes and Noble that my wife and I frequent. For online sales, I try to go to the publishers’ sites (for indies) or Amazon.

I think it’s important to accept bad reviews as part of the territory of being a professional. I don’t believe any serious novel, short story collection, cd, painting, or film can ever please everybody (and I don’t believe it’s a good idea to even try). I don’t set out to purposely alienate or pander to an audience; I won’t submit a work until I can tell myself it’s the best I can do at that point in time. After that, I’ll accept readers’ verdicts, whatever they turn out to be.

I don’t think writers need any advice beyond Read, then Read some more, and after that keep Reading and be mindful each time you do.

You’ve written four novels in the last twenty-five (or so) years. For you, what has been the biggest change in your voice/style from A Choice Of Nightmares (1991) to Words To Die For (2015)?

It probably makes more sense here to talk about what hasn’t changed in terms of style; my goal for each novel was for it to have its own ‘signature’ style, one particular to the subject matter, plot, and point of view of the characters. Some of the novels can be paired stylistically. For example, The Long Fall and The Head Start (the one I just completed and submitted to my agent) match up. I see A Choice of Nightmares and Words To Die For as sharing similar characteristics; Late Rain will be close to the one I’m working on now, tentatively titled The Length of Days (it’s an ensemble novel like Late Rain).

As usual Mr. Rawson asks the right questions of the right people.  I hope this leads to more people becoming aware of the enormous talent that is Lynn Kostoff.  Every word that Mr. Rawson says in praise of Kostoff's writing is echoed by me.  Looking forward to his latest and glad to hear that he has 2 more waiting for publication.