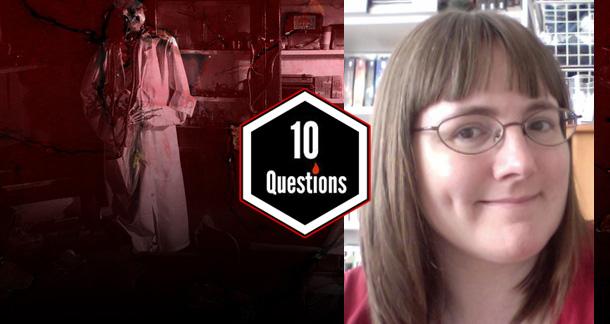 It's Halloween season—the best time of the year to scare yourself silly. And horror writer Gemma Files is an expert at terrifying prose. She's gone to great lengths to add complexity and literary merit to a sometimes (unfairly) dismissed genre—and we were thrilled to catch up with her for a chat.

Gemma Files first broke onto the horror scene when her short story "The Emperor's Old Bones" won the International Horror Guild's 1999 award for Best Short Fiction. She has written two collections of short work (Kissing Carrion and The Worm in Every Heart) and two chapbooks of poetry (Bent Under Night and Dust Radio).

Her first novel, A Book of Tongues: Volume One in the Hexslinger Series, was published in April 2010. The trilogy is now complete, including sequels A Rope of Thorns (2011) and A Tree of Bones (2012), and she is hard at work on her first stand-alone novel.

To gear up for her class, Write What You Fear, we posed these 10 Questions to Gemma.

I started out doing pastiches of whatever I was reading at a given time, like you do, and most of the stuff I wrote all the way through I finished for school. At one point I was offered the opportunity to get something published in the school paper, so I pumped out this massive, thirteen-chapter epic—handwritten, on lined, legal-sized paper, with a cliffhanger at the end of every installment—that was sort a mash-up of Lloyd Alexander's Chronicles of Prydain, Roger Zelazney's Creatures of Light and Darkness and Michael Moorcock's Corum Series. I found it the other day and it's pretty spectacularly awful, not to mention full of very questionable content, though I think the real reason they didn't use it was they just didn't have that kind of space to waste.

Horror is comfort food for me...It's like therapy, not least because it takes place under inherently safe conditions.

When I sold my first short story, I celebrated by getting a tattoo—two quotes, in a spiral on my right shoulder: “Be neat and orderly in your life, like a bourgeois, so that you may be violent and creative in your work,” which is from Flaubert, and “Listen to stories; it's always interesting, and sometimes it improves you,” which is from Peter Brook's stage production of the Mahabharata.

Get an idea, scribble it down in a notebook, transcribe the notes into a file, start hooking them together. I also compose stuff in my head when I'm walking around, doing chores or working out. I try to average 500 to 1,000 words a day when I'm working on something, and resist the urge to edit or rewrite until I've got a first draft. The point is to get as much down as you can, then go through, trim off the fat and find the real text underneath. I've been known to cut up to a third of my first draft, but a lot of that tends to be repetition and overwriting. The order that things come to me in is almost always character dynamics, dialogue, scene action, plot fixes, then—last of all—retroactive world-building to explain exactly why it was necessary for things to go from [x] to [x].

What I've learned over time is to never let yourself think of your own writing as somehow sacrosanct, far too important to modify—because yes, a lot of people's advice or notes are so specific as to be useless, but if you keep getting the same reaction over and over from a bunch of different people, then this is something you owe it to yourself to take a look at. Internal consistency is far more satisfying than “originality” for originality's sake. It only counts as a defeat if people can figure out where you're going if you then go on to deliver on that prediction in the most boring and limited of ways. Don't do the latter, and there's no shame in the former.

My latest work is We Will All Go Down Together: Stories of the Five-Family Coven (from ChiZine Publications), a linked story cycle which reprints six previously published tales that share characters, setting, background and a mounting plot, finished off with three more stories and a climactic novella; the families in question are descended from three witches, a changeling and a magician, all of whom were once involved in an unsuccessful attempt to remake the world into a place where monsters were the default and humans the minority. Since then, in the wake of one half of the coven betraying the other half, they've all ended up in Canada—the area in and around my home city of Toronto, Ontario, to be exact—and continued to feud, intermarry and interbreed for the last 400 years, both passionately involved with each other and passionately committed to destroying each other: monster-killing monsters, in other words, who also happen to be as CanLit CanCon as a sack of blood-soaked maple leaves. So the catharsis I got out of writing it was two-fold, in that I finally got to showcase the original stories within context and bring all the stuff I'd seen vaguely going on in the background of this world to its logical conclusion, while also hopefully turning my “placid,” “boring,” “uneventful” home into the gothic, glamorous cornucopia of creep I always wanted it to be, as a self-identified Canadian horror author.

These days? Either Rick Grimes or the Governor from The Walking Dead (TV show edition only), 'cause they both seem like they get a little handsy and impulsive when they're drunk. So actually maybe both of them, at the same time.

Any place I can get them.

I try to evaluate them objectively, figure out if there's anything to take away from them, and then I basically delete them from my brain. I definitely don't link to them or take issue with them, ever. At one point, I actually kept a file with bad reviews in it, because I used to have a U.K. copy of J.G. Ballard's Crash which had only quotes from negative reviews on the back and the inside flap and I thought that was totally bad-ass, but I gave up on that a while back. Life's too short.

Well, as we know from the course I'm about to teach, I used to think the worst piece of advice I ever got was “write what you know.” These days, however, the worst trend I encounter is this artificial divide being constantly placed between big-L Literature and greasy, smelly, oh-so-populist genre fiction, which makes the worst advice I hear: “Never identify yourself as a writer of [x genre], because why would you want to limit yourself that way?” And granted, I'm obviously partial—but for me, admitting I'm 'just' a shameless genre hack has been creatively freeing. It gives me license to not worry over whether I “should” be writing what I write, and simply concentrate on producing product based on themes I enjoy exploring. Yes, there can be financial benefit to not branding yourself as only a writer of [whatever], but if worst comes to worst, you can always just change your name and write what you're gonna write anyways.

WILDCARD: What lessons have you learned (if any) from reading and writing horror?

Horror is comfort food for me. I know that sounds odd, but it's true. It's like therapy, not least because it takes place under inherently safe conditions. Reading, viewing and writing horror makes me look at my fears as a spectrum, not some huge, solid, indigestible mass—to understand what scares me, and why. And that's really useful, because it allows me to both acknowledge those fears and sort the ones which can be dealt with practically from those which can't. When I shut the cover of a book or press STOP on a DVD, I am in control; there are rules to follow, formulas and patterns to map, a sense of order, not chaos. The real world can knock you down at random and steal everything you have in a heartbeat, but horror is like any ritual, whether sacred or profane: at base, you have a pretty good idea of what you're going to get. And I appreciate that.

Interested in learning more about Gemma's class? Learn about it here!