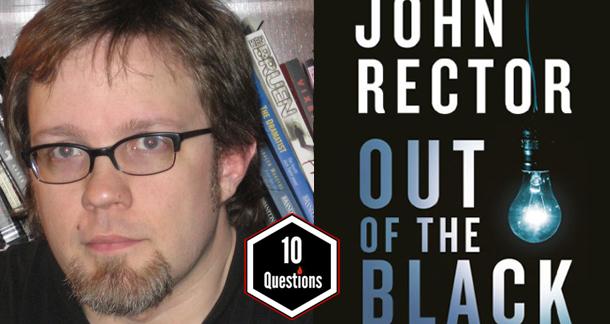 I first became aware of John Rector in 2009 when Brian Lindenmuth of Spinetingler Magazine ran a series of interviews titled, Conversations with the Bookless, on the now defunct website, BSCReview. Rector was featured in a portion of the series called “the not so bookless," because a couple of weeks before the interviews began, Rector had sold his second novel, The Cold Kiss, to Tor/Forge and had decided to  Kindle publish his debut novel, The Grove, as a means of promoting The Cold Kiss. At the time, self-publishing was still viewed with a fair amount of disdain within the publishing community, but with The Grove teetering the line between crime and horror, the big 6 had no idea how to market it, causing them to pass on the chilling, tightly written manuscript.

Fast forward to 2013 and Rector is still writing the same chilling, tightly crafted novels, but he’s now one of Thomas & Mercer’s bestselling authors and one of crime fiction’s certifiable heavyweights. And with his latest, the grim page turner, Out of the Black, Rector is sure to gain an even wider fanbase.

The first complete story I wrote was called "Hula Girl." It was about a woman who went insane because she couldn't have kids. One day she goes off the deep end and convinces herself that her husband’s growing middle-age paunch is actually a baby, so she drugs him and duct tapes him to their kitchen table. After he wakes up, she tells him she's going to perform a C-section. He tries to be rational and talk her out of it, but she's on a mission. She brings in the dashboard Hula Doll from his car and sets it on the counter and tells him to use it as his focal point, then she takes a steak knife from the drawer and slices him open. She immediately realizes her mistake, but when she gets up to call 911, her feet get tangled in his spilled intestines and she falls, hitting her head on the counter and knocking herself out. The story ends with the husband taped to the table and bleeding out while he stares at the wiggling Hula doll and laughs at himself and his poor life choices.

As far as what happened to that little gem, I have no idea. It was published on some webzine, but I don't remember which one. I also don't have a copy anymore, so it looks like it's gone for good. Which, honestly, isn't a big loss.

I didn’t celebrate. It seems ridiculous now, but at the time I didn't want to acknowledge any success, no matter how small. I didn't start writing until I was thirty, so I've always felt like I had a lot of catching up to do. I thought if I lessened the pressure by congratulating myself for little sales, I'd lose the edge and the drive I needed to go after my bigger goals. This went on for a long time, even after I started publishing novels. I never fully let myself enjoy what was happening around me. It wasn't until earlier this year that I forced myself to stop and look around and appreciate everything that's happened.

I'll do whatever it takes to get the words on the page. Usually, I'll start by taking notes and doing a rough outline by hand, then I'll clean it up and transcribe everything over to a word document. I use this as a roadmap that I can tweak and add to as I work on the manuscript. When I'm actually writing it's almost always on the computer or on a typewriter. With the typewriter, I've found that sometimes seeing real pages stack up on your desk can be a mental boost, especially when you're working through the long middle of a book.

I don't know if it's a mistake since everything turned out ok, but part of me does regret not going with my original ending for Already Gone. The first draft ended with a really grim homage to Double Indemnity. I had Jake, the narrator, lose everything. He's stuck on the beach in Mexico, and he's flat broke. His wife has just double crossed him, and he knows if he goes home Gabby (his mentor) will kill him. So, he makes a steak dinner for himself then walks down to the beach which is closed because of sharks feeding off shore. It's a full moon, and Jake stands there for a while watching the way the light reflects off the surface of the water. Then he takes a knife, slices his wrists, and wades out into the sea. The book ended with him on his back, staring up at the full moon, and feeling something massive pass under him in the black water as he floats away.

The consensus from everyone around me was that I absolutely COULD NOT have the main character devoured by sharks at the end. It was possible Simon and Schuster would've refused to publish the book with that ending, and at the time I wasn't completely sold on it myself, so I let it go without much of a fight. It wasn't until later that I looked back on it and realized that the shark ending was the perfect ending for that book, and I'd screwed up by not realizing it at the time. In the end, the book sold well, and everyone at Simon and Schuster and Thomas & Mercer was thrilled. Still, sometimes I just want to slap myself for not seeing it sooner. Live and learn, I guess. The good thing is that I have more freedom to do what I want now, so I'll never make that mistake again.

Out of the Black was the book that convinced me to slow down. I mentioned it above, but I got into an early habit of always looking at what was coming next, or what might go wrong tomorrow instead of appreciating where I was and what was happening around me. That approach helped with some of the decisions I've made in my career, but it also took a lot of the fun out of this job. When I finished Out of the Black and felt the old pressures coming back, I just decided I'd had enough. I don't know if it was the book that brought this on, or if it was just me entering a new stage of my career, but I'll always associate this shift in perspective to Out of the Black.

I try and buy a book every time I'm in an independent bookstore, whether I'm there to sign or not, but the majority of my purchases come from Amazon.

The only time a bad review bothers me is if the reviewer points out something I agree with, otherwise they're easy to shrug off. Nobody likes bad reviews, but you can't please everyone, and I've always thought if you're going to have the balls to publish your work for others to read, you better have some damn thick skin. I'm somewhat baffled anytime I hear a writer whining about a bad review. Maybe it's just me, but I can't think of a more meaningless thing to get upset about. Politics maybe.

The worst advice, by far, is to ignore the show don't tell rule.

I don't know when this advice started popping up, but it's been making the rounds for a while. It's not that the people giving the advice are wrong, or that their intentions aren't good, but they're giving this advice to people who haven't reached the point where it'll make them better writers. If anything, that kind of advice is going to create bad habits and make them worse writers in the long run.

I'm a firm believer in the idea that artists need to not only learn the fundamentals of their craft, but they need to master them to the point where they become second nature. Once they do, they'll hopefully be able to see where telling works better, or where they should show something for the best dramatic effect. I don't see how rushing the learning curve helps anyone.

When you originally Kindle published your first novel, The Grove, did you expect it to take off the way that it did? And would you ever go back to self-publishing your titles?

I didn't know what to expect when I released The Grove on my own. At the time I'd just signed a deal with Tor/Forge for The Cold Kiss, and I was looking for a way to build an audience before the book came out. Since I have such a strong aversion to social media, blogging, and any form of self-promotion, my options were limited. I'd read an article about Amazon's Kindle Direct Publishing platform and thought it looked interesting. I've always believed that the best way to promote your writing is with your writing, so I decided to give it a shot. Thankfully word of mouth kicked in and The Grove sold well enough to catch the attention of Amazon Publishing who picked up the book, and later Houghton Mifflin Harcourt, who published it on their Mariner imprint.

And yes, I'd definitely self-publish in the future.

Thanks for doing these interviews, Keith I always enjoy them.

I haven't read anything by Jon Rector but I am adding him to the list now.

I've been seeing this guys name a lot recently online and reading reviews for Out Of The Black. His stuff sounds interesting. I've put a few of his books on my amazon wishlist to pick up later when I've got some dough.