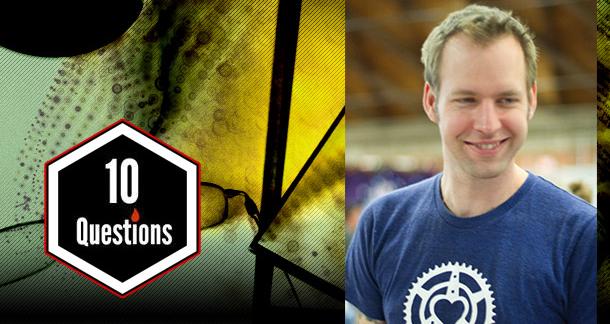 Joe Biel is a writer, activist, journalist, filmmaker, teacher, and publisher. He founded Microcosm Publishing and the imprint Cantankerous Titles, which have published over 300 titles and sold more than one million "classic format" paper books. He co-founded the Portland Zine Symposium and is the author of Beyond the Music, Make a Zine, and The CIA Makes Science Fiction Unexciting. He has been featured in Broken Pencil, Maximumrocknroll, the Oregonian, Portland Mercury, Punk Planet Magazine, Readymade Magazine, and the Utne Reader.

He's also teaching our first class geared toward non-fiction writers: Intro to Non-Fiction, aimed at helping writers to find their audience and perfect their pitch.

What was the first book you published, and what's happened to it since then?

The Flow Chronicles by The Urban Hermitt was a little too ambitious for the knowledge I didn't have at the time. But a low printing (2,200) combined nicely with relatively low demand, which allowed it to stay in print narrowly many years later, and many people have approached me excitedly to say that it's their favorite book. It taught me that merit is not related to popular success, but rather to critical success. Every year we seem to have ten copies left. Hermitt had major life changes and now has a career that requires secrecy which makes it hard to promote a book or write publicly.

When you get a manuscript submission that gets you excited, where do go to read it?

When it's the right manuscript, I don't go anywhere. Wherever I am sitting is where I read it—whether it's a park bench, concrete stoop, standing in front of the post office, in the bath, or in my repurposed recliner desk that I call The Command Center.

* You can become a fan of The Command Center on Facebook.

Opportunities are bigger than ever. Our biggest success to date was in May 2010, in the middle of a huge industry "sales slump." You may have to work harder but the rewards are there.

How do you decide what to publish—what’s the acquisition process like at Microcosm?

We have always had a really smart staff that knows our audience well. We have monthly meetings where we brainstorm books we'd like to see and a brainstorm board where we post ideas. Some of our best books come from submissions from fans who have paid attention to the direction we are heading. If someone has a good idea that fits we'll ask them for a few chapters and go from there. But mostly we'll pursue talented people and propose things we'd like to see from them.

What's the biggest mistake you've made as an editor?

After a few dozen successes I wrongly assumed that our audience would buy and enjoy anything we published so—based on merit—we published quite a few books in 2006 and 2007 that either confused our audience or were critically acclaimed flops. It was equally hard at times to acknowledge that we were not seeing continual, unbridled growth, which led to numerous books being overprinted. In more micro cases, I've both been guilty of staying out of an author's way to a fault and meddling too much with their voice. After seventeen years I think I mastered the balance.

Let’s talk about covers. We’re not supposed to judge, right? But covers seem more important than ever. What is Microcosm's take on that?

We take covers very seriously. We'll throw something away and start over after announcing it if it's just not working. We have a pretty flexible pair of cover designers and really work hard with the cover consultants at IPG to make sure it fits the book each time. It doesn't do a service to anyone if the cover doesn't help the book. And I really think our cover design has come a long way even in just the last few years.

What book out in the past 10 years would you like to have published?

Since it's 2013 and I can't say Our Band Could Be Your Life, I'm going to tell you a sad story about a book you've never heard of: POST: A Look at the Influence of Post-Hardcore 1985-2007, which is like Nothing Feels Good written in the vein of Our Band Could Be Your Life, or at least could have been. We offered the author a contract, but he said he had already gone with Author House to get his book published. He didn't seem to understand the difference between a pay-to-play print-on-demand "publisher" and having an editor, a cover designer, and a booktrade distributor and sales representatives working on his behalf based on the book's potential. It was frustrating and sad.

I run into this a lot at conferences—authors not understanding the difference between pay-to-play and a publishing contract. I'm sure every editor has the experience of finding a book that could be great with proper editorial work but instead reading it feels like a chore. At the same time I've ended up being able to publish a lot of books that felt out of our league and with many trusting and talented authors like Anne Elizabeth Moore, Stephen Duncombe, and Ayun Halliday.

Where do you sell most of your books?

Record stores, gift shops, candy stores, clothing stores, and weirdo niche shops that don't stock any other books are our bread and margarine. Even now that we are distributed by IPG we still sell the vast majority of our books directly outside of the booktrade. I'm an old punk so that's how I knew to do distribution seventeen years ago and it stuck—particularly as book and comic book stores have been closing.

How do you handle bad reviews of your authors’ books?

The local paper called my recent book Beyond the Music "barely edited", while the other reviews I saw called it "brilliantly edited" or "masterfully curated". It felt flattering but it was also clear that they barely read it. They were reviewing the concept. There are two kinds of bad reviews we get—people that don't get it or don't read it, and well-thought, long form critical analyses of our hard work.

The former is often entertaining to laugh at or scratch your head trying to decipher. The latter often feels respectful that someone has thought about one of our books as much as we have. That's a compliment. I'm wracking my brain to think of a "bad review" that didn't fit one of those categories and I can't.

What's the biggest lie about publishing?

That's it's going away or over. Opportunities are bigger than ever. Our biggest success to date was in May 2010, in the middle of a huge industry "sales slump." You may have to work harder but the rewards are there. We got into Entertainment Weekly and on NPR without even trying. A diverse volume of work has been helpful for some unlikely successes.

What are your favorite and least favorite parts of the publishing process?

Favorite: Meeting the people—authors and readers—on tour and at events. We do an annual author tour now for that: dinnerandbikes.com.

Least: Having to explain to an author that we've been unable to sell their book as much as we expected.

I started buying books from Microcosm when I when I was 17. It was the first time I realized you could have a connection with an actual publishing company and not just an author. I had the pleasure of hearing Joe read with several other microcosm authors in Boise several years back. It was a rad experience. It's awesome to see him on the site.