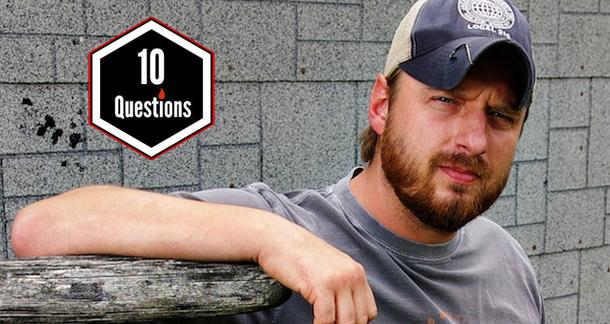 Frank Bill’s Indiana seems like a scary kind of place. I mean, I know the real Indiana isn’t so bad; I’ve been through the Hoosier state more than a few times and the people I’ve met there have been friendly, seemingly decent human beings. Of course, my visits were before the housing bubble burst, before the good working class jobs in the Midwest started to dry up and be replaced with minimum/slave wage retail jobs that barely fill your tank, let alone keep a roof over your head and food in the refrigerator. So as far as I know, the meth addled, blood soaked Indiana of Frank Bill’s fiction is a fair and accurate reflection of the state, and if I were you, I’d probably give the whole state as wide a berth as possible while traveling.

I’m, of course, kidding. But you have to wonder where Frank Bill’s Chuck Palahniuk meets Larry Brown with a dash of Flannery O’Conner style of storytelling comes from? Is it personal experience? Is it all pure imagination? Or is it a touch of both? Whereever it comes from, Bill’s stories are brutal, raw pieces, which at times have a bit of a biblical kick mixed in. And as with Bill’s debut short story collection, Crimes In Southern Indiana, Bill’s first novel, Donnybrook, is populated with the same outcasts, addicts, and down on their luck hardmen. Plus there’s pit fighting. In fact, Donnybrook contains some of the best, most vicious fight scenes I’ve read since Craig Davidson’s The Fighter.

I kept writing this novel based on a woman who was lying in a hospital bed dying of cancer while all of these strange things were happening around her.  No idea where it's at. More than likely on an old flash drive.

I write from a real place and base things on people I know or have known. Then I crank it up to what I enjoy, not what some reviewers might enjoy.

I write everything free hand first in either my leather bound journal or my moleskin. But I also keep two or three notebooks lying around to write in. I use these when I sit down and type at my laptop. Print my work to hardcopy and line edit. Making notes throughout. I’ve even carried the hard copy around at work and did line edits but the moleskin comes in a bit more handy.

Not revising and editing. Used to be I’d find my ending at 6 AM and I'd be on a writing high, endorphins with the four barrel kicking, laying rubber tread, believing I’d just written the greatest story ever. Send it out without revising only to look at it a week or so later and realize it needed a lot of work. But that’s part of it. I don’t do that anymore.

With Donnybrook, it was a breath of fresh air. I mean when I wrote it after the stories, I didn’t have an agent until I was about 25k in. Then I got signed by Stacia Decker and the belief we had was this is powerful writing. But to see it come to fruition now after three or four years, all of the effort was worth it. That’s part of it. You have to believe in yourself when no else does, keep on writing regardless of rejection.

From Donnybrook? Fu, but in a sense I know him because of who I created him from, one of my teachers. From someone else’s work, Joe Ransom from Larry Brown’s Joe. Hard living. Hard drinking. You know that guy has some stories to tell.

Everywhere. Indies and online. It comes down to whether it’s new or out of print.

Depends on if it’s a review or just someone wanting to be an asshole. I had one guy slam my first book online in a sense, out of jealousy. Then some reviewers just don’t get what I write or where I’m coming from. I get that. But I write from a real place and base things on people I know or have known. Then I crank it up to what I enjoy, not what some reviewers might enjoy. Either way it doesn’t bother me, everyone gets something different from what I write.

Sure, send me a sample of your work, I’ll take a look at it. And I say that with good intentions, but honestly, as a writer you won’t, reason being you’re too damn busy.

Your debut novel, Donnybrook, is about pit fighting/bare knuckle boxing. What kind of research did you do to prepare for the novel? Also, do you practice any fighting disciplines, and if so, how long have you been practicing?

I did no research on the fighting as I’ve studied various martial arts since I was 11 and cross trained in western and eastern boxing.  I was fortune enough to study closed door or traditional Chinese martial arts from two different teachers from the time I was 18 until I was 30. Today, all I do is lift weights and box, more to keep in shape than anything else. With meth I interviewed an ex-cook to get a recipe. That was interesting from the aspect of where he was from, Kentucky. And depending on what holler or county you lived in, each family had a different recipe of anhydrous dope. He and I spoke for a little over an hour way back when.