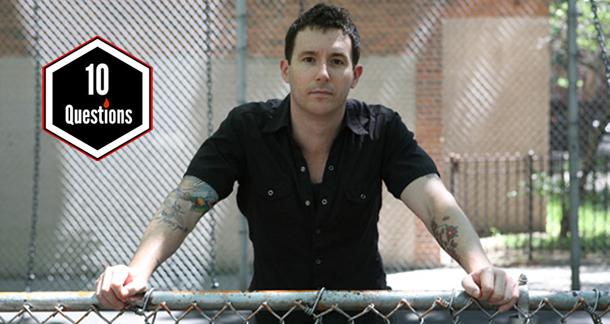 I don't think it's any secret that we love Joshua Mohr 'round these parts. He's written some excellent books—such as Some Things That Meant The World To Me, Termite Parade and Damascus—and he also helps others write excellent books, teaching in the MFA program at the University of San Francisco and here, at LitReactor. So of course we are excited about the release of his latest novel, a satirical take on the midlife crisis called Fight Song. We are giving away a copy in this month's Flash Fiction Smackdown, so head over there if you like free books and think you've got what it takes.

But wait, there's Mohr. Josh is also a guest on the latest episode of Unprintable: The LitReactor podcast, in which we discuss stories we never need to see again. Ever. So forget Valentine's Day, February is a Mohr kind of month.

I sat down with Mr. Mohr (if you count sitting in front of our respective computers and emailing) and subjected him to the usual battery of questions. Enjoy.

I never wrote a story until my early 20s.  I had this shitty job as a production assistant at an advertising agency and I only had about half an hour of responsibilities every day.  But I could not leave my desk, had to be there to answer the phones of the fat cat producers.  Stuck at a desk was the perfect way to start an apprenticeship as a writer.  I pecked out terrible stories, unconscious emulations of whomever I was reading at the time.  My first was a horrendous Burroughs rip off.  Yikes.  Glad it never made its way online.  I don’t need that literary herpes popping up periodically.

The first piece of writing I sold was my debut novel, Some Things That Meant the World to Me.  I got a very small advance and blew it, figuratively and literally.  I’m not going to say it was a bender.  But I’m not not going to say that.  Writing a novel requires us to spend so many months and years holed up by ourselves and I think it’s important to go out and celebrate these milestones.

I’m an insomniac, so I write between midnight and about 5 a.m.  I like every light in the apartment to be off except the laptop’s odd illumination.  For whatever reason, I dig the idea that the only thing that’s lighting up my world is the work itself.  The plot, the characters, and beyond that, there’s utter blackness.  Just me and the work.  Isn’t that a writer’s dream?

Tom Waits usually does me right, say one of the more carnival-y ones from the 80s, Swordfishtrombones or Frank’s Wild Years.  I know a lot of authors have to shy away from music when they write, especially songs with lyrics, but I actually need music playing.  My sentences tend to be more rhythmic, more syncopated.  It’s almost like a drummer using a click track during the recording process.

Probably Esther Greenwood from Sylvia Plath’s The Bell Jar.  I like my women damaged.

I live in the Mission District of San Francisco.  We’ve got a great local shop on Valencia street called Dog Eared Books.  They always do me right.  At least once a month I schlep across town to North Beach, to City Lights.  That’s a pantheon of literary heroes and I love wandering around in there.

I’ve been very lucky.  With my first three novels, I only got one bad review—in the Washington Post.  The headline was “Mohr is drunk on clichés.”  And it just got worse from there.  I could lie and tell you it didn’t hurt my feelings, but it did.  I nursed my wounds for a couple days, but then I got back to work on the next novel.  For me, the solace is in the process.  Writing is my sanctuary.  With a couple rewarding days on the page, I have my thick skin back.

I teach in the MFA program at the University of San Francisco, so I hear apprentice writers giving one another bad advice all the time.  The one that scares me the most is the “just send it out” phenomena.  One worry with all the digital presses these days is that people probably can publish a book before it’s ready, meaning before it’s gone through rigorous revisions.  The hard work happens in the rewrites, and no one’s work is ready in the first year, or eighteen months of its life.  We have to push past the pretty good phase and publish the best books we’re capable of writing.   Novels need time to steep.  It takes time to render a consciousness that’s not the author’s own.

WILD CARD: Fight Song is a fresh take on the tried and true midlife crisis. Unique yet accessible. How did you discover the story? Did it start with the bizarre bits and pieces or the big, relatable themes? And how did you maintain the balance?

I never write with any sort of plan, outline, or schematic, so the story reveals itself to me quite slowly.  There's a lot of trial and error in my process.  All I know when I start one of my novels is the opening image.  So I knew that Bob Coffen was going to get rammed from his bicycle by his alpha man-boy neighbor–and the violence would sort of jar him loose from something.  Besides that, I had no idea.  I love that reckless and sloppy process of discovering the characters, the trajectory.  That first draft is such a fever dream, the imagination totally let lose.  It's like trying to ride a mechanical bull.  It's not a question of if you'll be bucked off, but when.  And with Fight Song there's weird magical realism and asinine plot points and a loose interpretation of The Wizard of Oz, so finding the structure took forever.  I have the metaphorical broken bones to prove that this bull sufficiently kicked my ass.  But I wouldn't have it any other way.  I always feel we do our best work as artists when we're totally vulnerable, way out of our comfort zones.  Here's hoping I stuck the landing.

The guy is a genius