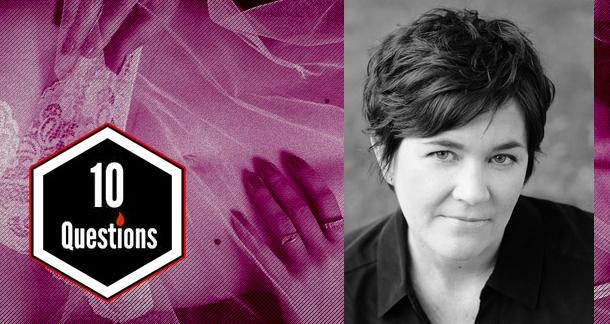 Here's your chance to get to know her.

My first story was a novel called The Key, which was sold along with its sequel to a small ePublisher. Now and then I get a royalty check and can buy myself a milkshake.

I didn't. Is it too late to start?

Whatever gets the words on the page is fine with me. Usually I begin on paper. Very cheap paper and a cheap pen, the better to write without being too precious. My handwriting is awful and the pages are a mess, with words scratched out and indecipherable notes up the margins, lots of arrows pointing this way and that. I have discovered that the pages have to be typed up fairly soon after, or I won't remember what on earth I was trying to say. So it's usually the next day that I get them into the computer and do a rough first polish while I'm at it. I carry on that way until I have a full draft on my laptop, at which point I begin to revise. And revise. And revise...

Publishing too soon. Once the work is out there, you can't reel it back in. The problem, of course, is that you don't realize it's too soon until it's too late. At first you think everything you write is wonderful, you're seduced by the act of building a world and a cast of characters—with words alone! OMG!—and you imagine that readers can see the story as vividly as you do. Only later do you develop the proper levels of angst and self-loathing that help you produce something worthwhile.

Hmm, that's a good question. My latest book is unrelentingly dark and it hurt like hell to be mired in it all those months. After I had finished and received my first positive response, I sat down next to my bed and cried for hours. Out of relief, gratitude, pride? I'm still not sure. But everything since then has been a little easier.

Alice in Wonderland. I want to go to the tea party.

I moved to Portland earlier this year. Portland, as in Powell's City of Books. Thank god there are pubs nearby where my husband can watch the game, because I'll be in there awhile.

With tears, alcohol and profanity. Usually in that order.

Write what you know. What I know would span about two chapters and put even me to sleep. I believe we should write what surprises us, what we don't understand except at the deepest and least accessible levels. If you start with characters and situations that are unfamiliar, you leave yourself the space to work back to those universal truths.

WILDCARD: As someone who writes within the erotica genre, what are your thoughts on the impact and importance of Fifty Shades of Grey?

I'm not sure there's much long-term impact or importance in Fifty Shades. It's a product of the zeitgeist and that's something you really can't replicate. But it seems to me that the author has been bold in terms of writing what appeals to her personally. No holds barred, she's in it for the kinky young billionaire and the starry-eyed virgin. Sex! Money! Helicopters and bondage! Now, the books don't appeal to me, so I'll admit I haven't read them, but they are beloved by women all over the world who are thrilled to see their fantasies played out so thoroughly.

I think the lesson for writers is that we can and should go all the way with a piece of work. Be extreme in your characterizations. Play to your most extravagant self. If you think you shouldn't write it, do. That's where the good stuff is.

J.A. Nedoe here...absolutely love this artical and author. Great information for those starting off.