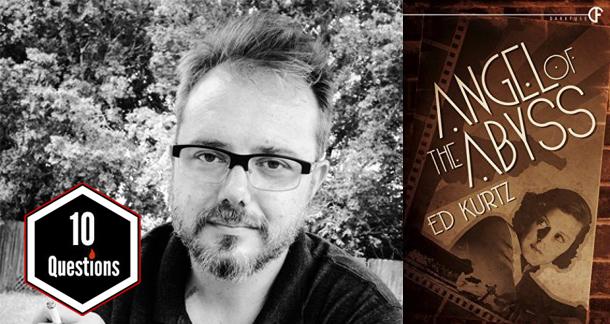 Ed Kurtz is a hell of a writer. Last year he asked me to blurb his novella, Freight. I jumped at the chance because, hell, I would get to read it before anyone else! Here's what I ended up saying about the book:

In less sure hands, Freight would be an unending train of grief, but Ed Kurtz has this amazing ability to present the darkest corners of society, and then reveal the good and decent human heart that beats underneath.

I think that applies to more than this specific novella, and really sums up what I love about Ed's work. He's not afraid to go dark, but rather than doing it for the sake of it, he does it in a way that illuminates the humanity of his characters, displaying a real sense of honesty and vulnerability. It's a skill I'm always impressed by, and also a little jealous of.

And, credit where credit is due: For a guy who grew up in the Midwest, he writes a fantastic 70s-era New York City yarn, as evidenced by last year's The Forty-Two. His latest novel, Angel of the Abyss, is out now from DarkFuse, with another novel, Nausea, coming soon...

The first story I ever published, outside of the college lit mag, was a bit of gross-out horror I did called "Pearls." I'd been furiously writing horror stories for a while by then, most of which ended up in the bin. I did a handful of what I thought were avant-garde stories as an undergrad, and before that went through my requisite Bukowski phase—I was even using a typewriter! But none of those were ever published, thank goodness. (I still reuse some of the titles, though.) But the very first story I remember writing was in the first grade on that enormous lined newsprint they gave us. It was about the Transformers, and I had an argument with the teacher over the sentence, "It started to rain." She contended I could not begin a sentence with "it," but rather had to identify what "it" was. She suggested, "The sky started to rain." And I'm still irritated about that

I received a check for $10, token payment, and I still have it. I was emboldened by the possibility that anyone would actually give me money to make up stories, so I celebrated by writing more of them. There might have been cake involved, as well.

Someone on Amazon said 'A Wind of Knives' was the worst book he ever read, which I think is really sort of a compliment. What an impact I made! The worst book ever! I actually kind of love that.

Always on a laptop, preferably while chain-smoking. I almost never write anything by hand anymore, having lost what little manual dexterity I ever had. I tried writing a short story in a notebook on a train in Germany in 2013, but upon returning home to transcribe it, I couldn't make out a damn word of it. (I had to start over, but I got "Nothing You Can Do" out of it.) Apart from that I'm not particularly ritualized, though I do set working hours and word count quotas. Lately I'm dividing my time between short fiction, a new novel, and a book of film history/criticism, so my hours and quota are further subdivided. I treat it like a job, because it is.

Just one? I think when I was first starting out I was happy if my name was in print, even if I wasn’t particularly happy with how a given story turned out. I figured if it was accepted, it was good enough. Now I’m more exacting with myself and I’ll hold onto something until I’m satisfied with it. This is not to say I was crummy before and perfect now—I don’t think either of those is true—but that it’s much more important to me to put out work I’m proud of with a good publisher than to simply publish.

I recently finished my next novel for DarkFuse, Nausea. It's an introspective, philosophical sort of noir story in which the protagonist, a low-rent hitman, interacts with a lot of people on the squalid side of life with pretty pessimistic perspectives that help drop him into a sort of sociopathic despondency before rebounding and rediscovering his conscience. The book gave me the opportunity to explore and parse some of my own darker thoughts and views, play with them a bit, and purge.

Captain Gus McCrae from Lonesome Dove. He’s a rascal, but an unflinchingly kind, hilarious, and capable one. Most of my favorite characters are terrifying people I wouldn’t want to be in the same room with, but Gus is a treasure. I honestly wish I knew him.

As often as possible I go to BookPeople in Austin, TX. It's an amazing store and even has a store-within-the-store dedicated solely to crime fiction, MysteryPeople, coordinated by a terrific fellow named Scott Montgomery. Loads of fantastic events there you can't get from Amazon. Impossible to walk out of there empty handed.

If there's anything I can learn from it, some glaring absurdity I never caught before, I'll consider the charge and think about reforming. Otherwise I'll ignore it. Someone on Amazon said A Wind of Knives was the worst book he ever read, which I think is really sort of a compliment. What an impact I made! The worst book ever! I actually kind of love that.

"Write what you know." Sure, we are all prisoners of our own experience, but most of us don't live interesting enough lives to chronicle for the general public. It's fiction, we make it up. I write a fair amount of historical material, and no, I wasn't there. A number of people have assumed I was in New York in the 70s after reading The Forty-Two, which is a terrific compliment and boost to my ego, but I was born in the 70s in the Midwest. I researched and invented. One might write what one knows, but as a hard and fast rule it's empty folk wisdom and fairly injudicious.

WILDCARD: Your work spans multiple genres—from crime to horror to western and on—and it does so with serious class and style. So tell me, what do you make of the charge those highfalutin literary nerds make, that genre is a lesser art form?

It's silly and dismissive. Fiction is, by definition, literary. I've read my fair share of dreadful genre material, but I've read more lousy faux-literary MFA thesis dreck than I care to remember, too—stuff that can't hold a candle to A. B. Guthrie (Western), Peter Straub (horror), or Jim Thompson (crime) in my estimation. When I see a great novel lauded as "literary horror" or "literary crime," I'm disappointed. Pleased that a superlative work is being recognized, but unhappy about such a back-handed compliment that effectively trivializes an entire genre. There is good fiction and there is bad fiction, and plenty in between. Mostly it's pretty subjective, sometimes plain as day. Genre has nothing to do with it. Lolita is a crime novel. Blood Meridian is a Western. What a puerile thing to get hung up about!