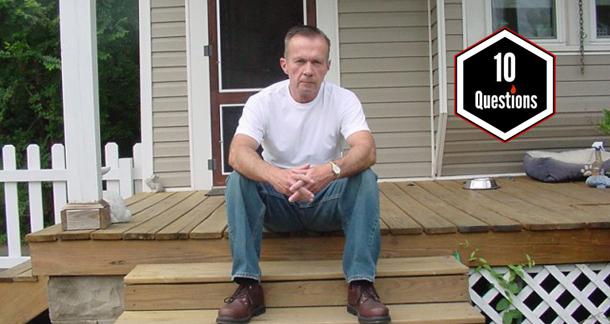 Writing an introduction to a Donald Ray Pollock interview is kind of like writing one for Margaret Atwood or George Sauders: They’re the best at what they do, so what else really needs to be said?

His three books, the masterful short story collection, Knockemstiff, and his equally brilliant novels, The Devil All The Time and The Heavenly Table—which comes out today—have set the standard for working-class fiction, which also happens to be an almost near impossible standard to replicate.

So I’ll just go ahead and shut up now and let the man do the talking for himself.

I can’t recall the title, or much of the plot now, but it was a story about a dowdy, overweight cashier in a convenience store who goes home every night and watches reality TV shows about people having liposuction and facelifts.  It was terrible and I shredded it.

I think the first piece I ever sold was a story called “Bactine” to The Journal for maybe thirty bucks, and, though I really don’t remember, I might have bought a pizza and a Dairy Queen Blizzard. I’d quit drinking by then, and I eat a lot of junk when I’m in a party mood.

That’s one of the big problems with the internet: there’s really no way to keep the quacks off.

Tell us about your process: Pen, paper, word processor, human blood when the moon is full. . .how do you write?

These days, mostly with the Word program on my laptop.  Sometimes I still use an IBM typewriter, mostly for single pages or paragraphs that I’m having trouble with, when I need to slow everything down and think about it.  I hate to admit it, but I don’t write in longhand because I can’t stand the sight of my handwriting.

What’s the biggest mistake you’ve made as a writer?

After my second book came out, I didn’t write much of anything for probably eighteen months. I spent four or five months working on a house my wife and I had bought, and it just got easier and easier not to go to the desk. That turned out to be a big mistake, mainly because I had such a hard time getting started again. But I did learn a valuable lesson: Don’t stop.

I’m not sure catharsis is the right word for me. For me, writing is therapeutic only in the sense that while I’m working I can forget about everything else.  When I finished The Heavenly Table, it was really more a feeling of relief. I hadn’t sold a book in five years, and I was almost broke.

What fictional character would you most like to have a drink with, and why?

That’s a tough one.  Maybe the Congregationalist minister, John Ames, in Marilynne Robinson’s Gilead, because he’s a kind, decent man, and I admire that type of person more than any other.  We would, of course, have coffee.

Mostly from used booksellers on ABE.  I collect first editions, and usually that’s the only place I can find what I’m looking for. Whenever I’m in a city with used/rare bookstores, I check them out. Some from Amazon. My wife buys everything she reads from Book World, our local bookstore in Chillicothe. Neither of us has ever read a book on a device.

Well, I’m not a masochist, so I tend to read only the ones my agent or Doubleday send me, which helps me avoid the bad ones. But when I do read a negative one, I shrug it off, at least I have so far. I’m not saying it doesn’t sting for a day, but I try my best to look at it this way: there are lots of books out there that I don’t like, so I should expect that there are also lots of people who aren’t going to like my stuff either. As for the reviews on, say, Amazon or Goodreads, there are loads of smart readers on those sites, people who really work at giving a book a fair and thoughtful review, but there are also people who are just mean and vicious. I even heard about a poor wretch who was kicked off Amazon because he gave only one star reviews for hundreds of books and composed his senseless critiques in some godawful poetry. I forget his name, but I’m told he’s on Goodreads now, pulling the same shit. I feel sorry for him because he’s obviously tormented, possibly insane, but that’s one of the big problems with the internet: there’s really no way to keep the quacks off.

What’s the worst advice you hear authors give writers?

I honestly can’t recall any.  What works for some people might not for others, and vice versa. I just say read and write as much as you can.

Both of your novels, The Devil All the Time and your latest, The Heavenly Table, are historical novels.  What attracts you to writing about the time periods you’ve written about, and would you ever consider placing a novel in a contemporary setting?

I’m sixty-one and have reached the age where looking back nostalgically can at times be an emotional experience, an array of experiences really, ones that I can draw from when I work. Too, I’ve always had a fascination with the history and the way people lived from around 1900 through the 1960’s; and by writing fiction set during those years, I get to spend a lot of time thinking about it. As for writing a novel with a contemporary setting, I’m not sure. Frankly, the present, the way the world is now, just doesn’t interest me much in terms of writing about it. I hate to sound so damn gloomy, but I can’t help thinking that our best days are behind us.

Stop whatever you're doing and read one of Mr. Pollock's books. They are incredible!

Stephen Conway from New York City is reading The Friends of Eddie Coyle by George V. Higgins and Make Something Up by Chuck Palahniuk on audiobook. July 14, 2016 - 7:54pm

Thank you, Keith Rawson, for posting this interview. Ever since Knockemstiff grabbed me by the throat and crushed my esophogus, I have to eat through a straw while reading Mr. Pollock's later books. Straws aren't as bad as people say they are.