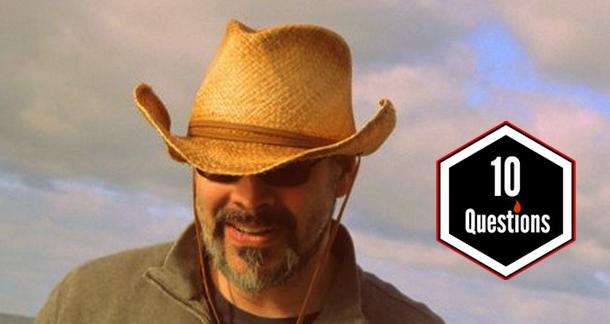 There are a couple of things you know you're going to get when you read David James Keaton.

You know you're in for some damn fine writing. You know there's going to be some good laughs. You know that, in the case of The Last Projector, you're going to suffer a minor lower back injury the first time you pick it up (remember: lift with the knees).

And you know things are going to get weird, in the best way possible.

A risible struggle between love and subversion of the western genre, PIG IRON takes place in the desert town of Aqua Fría after the wells have run dry, where crazed townsfolk drink whiskey instead of water, priming their bodies, as well as their situation, for combustion. Myths are exploded, horses are treated with little respect, atheist preachers hurl Bible quotes without irony, and villains and heroes sweat booze as their time runs out. They have three days before they die of dehydration. Only three days to search for illusive treasure, right perceived wrongs, and battle murderous hallucinations. With a glossary of western terminology, real and imagined, this violent yarn is Deadwood meets A Clockwork Orange, with a shot of "wry."

I wrote mostly about bugs as a kid, so my first story was spider related. It was called "Spiderbites," and it was basically a blatant theft of that urban myth about a spider biting someone and then... a week later a mob of baby spiders come bursting out. It was "published" in our Junior High School paper called The Elf, which I also helped to create. So that kind of conflict of interest and corruption started early. Oh, and it also ran in that little paper with all the "corrections" our faculty advisor had made to my story, all her crossed-out words and notes in the margins about how I should fix it. I thought it would be cool not to fix it but to photocopy and print it that way to be all edgy or something. But it only confused everybody.

My first real pro sale was for "Nine Cops Killed for a Goldfish Cracker" in Comet Press's The Death Panel, and I remember waking up my girlfriend at the time to show her the email. Then we got sushi. Settled for Pittsburgh grocery-story sushi though.

My process in no way resembles the recommended ways I always read about. I have to kind of hit bottom and feel the urge overwhelm before I can start typing.

I guess I kind of binge write? Marathon sessions, then nothing for weeks. My process in no way resembles the recommended ways I always read about. I have to kind of hit bottom and feel the urge overwhelm before I can start typing. At that point it's a race to get everything out. This is probably just as unhealthy as it sounds.

Not sending out simultaneous submissions. Then later, not simply writing a new thing when something was being considered somewhere else. It took a while for me to realize that there's no need to get impatient. Just write something else. Meteor's gonna hit anyway. So I keep the fingers flying.

My latest latest work is probably The Last Projector (Broken River Books), as Pig Iron was written during some breaks from that larger novel. Kind of like how the Coen Brothers got famously overwhelmed with their bigger movie Miller's Crossing, and took a break to crank out Barton Fink, which some prefer. But when I finished The Last Projector, I was sort of crazy for a time, still tying and untying the plot lines together in my head. Also, like that "red car syndrome" where you see red cars everywhere if you buy one, I became suddenly convinced many of my ideas were being scooped. Oh, wait, what does catharsis mean? Is it a "satisfying paranoia"? Then yes.

I would like to have a drink of water with Cable Hogue because that poor bastard was dying of thirst.

Carmichael's Bookstore is a block away, and sometimes I stop at the Barnes & Noble on my way back from work, but usually I only browse movies when I'm there. In Kentucky, an interesting movie selection is about as scarce as water in The Ballad of Cable Hogue.

I compose a letter that begins "Dear motherfucker..." Then I delete it. Just joking. I send it. Kidding! Honestly, I stalk them thoroughly and then do nothing about it.

That would have to be advice authors give writers.

Pig Iron is a western. What did you look to for inspiration while writing it?

My only inspiration is to prove to ex-girlfriends that I'm not a piece of shit. Just kidding! What do you think I am, a musician? Okay, I've read a bit of western fiction, but as far as inspiration, I love, love, love filthy, mean-spirited spaghetti western movies. My absolute favorites I will now list by their Spanish names not just because it's obnoxious but because of how much cooler those titles sounds. So of course (!) we got Per Un Pugno Di Dollari (a.k.a. A Fistful of Dollars), Per Qualche Dollaro In Più (a.k.a. For a Few Dollars More), Il Buono, il Brutto, il Cattivo, (a.k.a. The Good, the Bad, and the Ugly, Giù la Testa, (a.k.a. A Fistful of Dynamite, a.k.a. Duck, You Sucker, a.k.a. Once Upon A Time: The Revolution, Django, Django, Kill!  (a.k.a. If You Live, Shoot!, a.k.a. Oro Hondo, a.k.a. Se Sei Vivo, Spara), Django Unchained, most of the Djangos really, even Sukiyaki Western Django, C’era uno Volta il West, (a.k.a. Once Upon A Time In The West), C’era uno Volta il Amerigo (a.k.a. Once Upon A Time In America, Once Upon a Time in Mexico (a.k.a. Everybody Hated That Movie, but fuck it, he shoots the cook, and you need a trilogy to restore balance), Le Dernier Combat (a.k.a. The Last Battle, a French post-apocalyptic movie and a western in spirit), I Quattro dell'apocalisse (a.k.a. Four of the Apocalypse, Geronimo, Open Range (for the candy-bar scene at least), Six-String Samurai, The Three Burials of Melquiades Estrada, The Long Riders, Mannaja (a.k.a. A Man Called Blade), El Mariachi, Desperado, One Eyed Jacks, Pale Rider, Run Man Run (a.k.a. Corri uomo corri, a.k.a. Big Gundown 2), but the other serious no-joke essentials that are always on my mind when I think "western" would have to be McCabe & Mrs. Miller (the only only reason Deadwood exists) Deadwood, Unforgiven, Dead Man, The Assassination of Jesse James by the Coward Robert Ford, Ride the High Country, The Wild Bunch, The Ballad of Cable Hogue, Pat Garrett and Billy the Kid, Bring Me the Head of Alfredo Garcia, Utu, The Outlaw Jose Wales, Duel in the Sun, and The Proposition and Lawless and their soundtracks, and anything else Nick Cave is involved with, and I'll stop there because this will go on forever and then I'll have to watch them again right now.