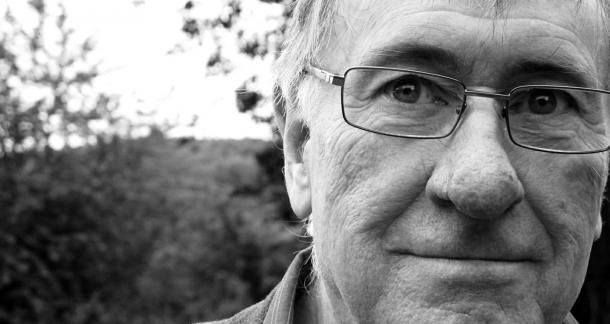 Christopher Priest wants to trick you.

His stories are multi-layered, steering you through a dark subterranean labyrinth full of twists and pitfalls to an ending you couldn’t imagine, let alone anticipate. The characters you encounter, each brimming with Priest’s trademark breath of life, will attempt to lead you astray at every turn as they methodically reveal their tales.

The seventy-year-old British novelist is a literary powerhouse. In 46 years of writing, he’s produced sixteen novels and four short stories. He penned the novelization for David Cronenberg’s film eXistenZ, and his novel about dueling prestidigitators in Victorian London, The Prestige, was brought to the screen in 2006 by Christopher Nolan.

His two newest novels, The Islanders and The Adjacent, made their US debut this spring. Science fiction, historical fiction, fiction fiction fans alike, whether new to Priest’s work or just discovering him, will have reason to celebrate when they crack these titles open and dive headfirst into his world.

I had a rare chance to pose some questions to the master illusionist himself, though whether you choose to believe the answers he provides at face value is up to you.

What was your first inspiration to write? And after 46 years, what keeps you motivated?

I’ve been reading books for as long as I can remember: I could read before I started school. Like many people who read a lot I developed a wish to write. My efforts were fitful while I was a child, but by the time I was 19 I was getting serious about it, and within a few weeks the die was cast. I wanted to be a writer, and nothing would get in the way.

After 46 years ... nothing much has changed. I suppose I am now at the age where most normal people want to ‘slow down’, enjoy their grandchildren, etc., but that’s not the case with me. Must mean I’m not ‘normal’. For most of my career I have felt as if I am a ‘young’ writer ... it came as a bit of a shock a few years ago when I realized some people were treating me as a venerable literary figure. I don’t feel venerable. I have a lot more to do, and I have plans to go on doing it. I suppose I’m too old now to keep up the conceit that I am a ‘young’ writer, but my inner self feels exactly the same as it did at the beginning.

How long was it before your first work was published?

Everything I wrote before it leads into 'The Affirmation' – everything I’ve written since depends on it.

It happened remarkably quickly, although at the time it felt like a long drawn-out process. I started writing seriously in 1963, and completed my first short story at the end of that year. I never sold it. But I did sell an article two years later, and a couple of months after that I sold The Run to a magazine called Impulse. Before that, though, I had had several of my early attempts published in fanzines. I imagine the fiction websites these days can have much the same sort of beneficial effect: you see what you have written in a different context, and with luck a few people will comment on it. I found that immensely useful then.

What do you do now, in process or craft, that you wish you'd done when you started writing?

I don’t think I would do anything differently, on reflection. I obviously made mistakes (but I still do). I have always tried to write to the top of my ability, whatever that is (and I still do). I sometimes look back at my older stuff and wince at some of what’s there, but I know that at the time, back then, I was serious about writing and I was trying hard to write well and I meant what I wrote.

Your stories raise one languid, gauzy curtain at a time and keep your reader in a constant state of suspense. How did you develop this knack for methodical, complex storytelling?

I think I must have a methodical, complex mind. I see complications in everything ... ask me the way to the next town, and you’re in for a lot of unexpected detail. I create stories in the same way.

The film release of The Prestige opened your work up to a larger audience, particularly in the US. Is this the story you would have chosen?

At the time, yes. The novel is more serious and complex than the film, and although I wrote it with not a single thought that it might ever be filmed, when it came down to it I was glad it was that novel of all the ones I had written to that point. It seemed to me then that it was an unusual mix of straightforward story-telling and complex ideas about reality, etc., and I thought that would look good as a film. In fact, the film made by Christopher Nolan concentrates on the performance side of the story, and made the central mystery of the novel into a film with a surprise ending. I personally think that was a misjudgment, but a lot of people liked it. Films and novels work differently.

As a consequence of the film, The Prestige is by far my best-known novel. And as a result of that it has become my most discussed and analysed novel. At first I thought this was great, but eventually I became tired of reading about it. The novel is still the same, though. My own favourite novel is always a toss-up between the one I just finished or the one I'm just starting.

After a bit of a hiatus on these shores, you have two new releases coming to the US: The Islanders and The Adjacent. What would you like new readers to take away from your work? 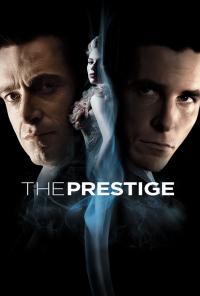 A feeling of pleasant surprise.

The Dream Archipelago pops up in four of your novels, including the two new releases. What keeps you coming back to this setting?

I never really left it. The islands have been at the back of my mind, and informing some of the images in my non-Archipelago stuff, since the late 1970s, when I wrote the first five novellas. My 1981 novel, The Affirmation, which I think is not well known in the US, is what I call my ‘key’ novel. Everything I wrote before it leads into The Affirmation – everything I’ve written since depends on it. In The Affirmation I laid my cards on the table: I made it plain how I saw the Archipelago, and after that I thought I’d better not go back there. But the years passed, no one seemed at all bothered by the revelations in The Affirmation, so I tiptoed back into it.

Stage magic, or more broadly, sleight of hand and illusion, is a theme of your work. Where did this fascination start for you?

I had published The Glamour a few years earlier, and I knew ‘prestige’ was a word associated with stage magic. Just a superficial notion: 'glamour' and 'prestige', a sort of pair in which both familiar words were given unexpected meanings. I started thinking about it, and hit on the idea of an illusionist coming up with a trick that baffled everyone, including other magicians. From there it was a short step to thinking of a jealous feud. The problem was I knew nothing about magic, but I had a lot of feelings about it. I did some research: books, interviews, stage shows, etc., and the idea began to fit with reality. (For instance, I learned that feuds between magicians were common.) While I was doing that I realized that magic tells a sort of story, and I began to see there was a central metaphor about literature. At that point I knew I had a story I could tell.

Your books rely heavily on scientific, historical, and social fact to set the perfect stage for your more fantastical elements. Tell me a bit about your research process.

For me, research is more of a confirmation of facts rather than a gaining of them. My novels are all works of the imagination. When I need to know something factual, it is almost always a detail that attaches the reality to what I have imagined, rather than the other way around.

Perhaps my most heavily researched novel is The Separation. Again, the idea began as an imaginative one, but once I realized the scale of the story I felt I had to make sure I made no mistakes. I was writing about the British bombing of Germany during the Second World War, which involved hundreds of thousands of deaths and injuries on the ground, as well as a terrible loss of life among the RAF personnel. You can’t treat that sort of thing lightly.

The near-future Earth of The Adjacent feels chillingly plausible. What prompted you to write this novel, and do you believe this is where we're headed in 20 years' time?

If you’re asking about climate change: it’s already happening. The climate began to change with the advent of the industrial revolution. The process is accelerating now. Anyone who lives in the USA or Britain will know that the winter of 2013/14 was unusual, to say the least. Worse is inevitably to come. I don’t think The Adjacent has a unique take on the near future. You can’t set a book a few years in the future and assume everything will be exactly the same as things are now, so you have to take account of that, but it’s intended as a plausible background rather than a main theme. It’s not what the book is about, and anyway at least a third of The Adjacent is set in the historical past.

The impulse to write the book came from a need to develop several ideas that had come up while I was writing The Islanders. The two books are adjacent to each other — for a time I was even writing them in parallel. They are completely different books (you can read either of them without knowledge of the other) but creatively they emerged from the same source. The Islanders began with the wish to make the Dream Archipelago into a rational place: somewhere you could visit or travel through, encountering surprises all the way. As soon as the characters started emerging, the ideas really kicked in. Now I see the two books as sort of relatives: not brothers, because that would be too close, but perhaps cousins from different sides of the family.

I knew he'd written The Prestige, but I had no idea he had such a body of work. Thanks for putting him on my map.