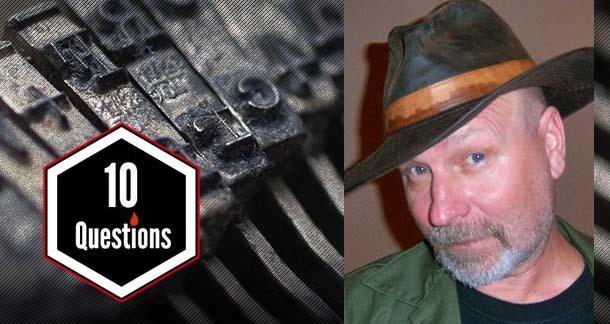 He's had a long and accomplished career, authoring well over a dozen provocative titles, like the best-selling The Light at the End (with Craig Spector) and the upcoming The Last Goddam Hollywood Movie (with Cody Goodfellow). He's edited anthologies featuring the likes of King, Palahniuk, Lansdale and Gaiman; runs two publishing imprints, and is transitioning into film (2012 Fantasia International Film Fest winner Stay At Home Dad).

He's also a friggin' writing machine. A few months back he taught The Choreography of Violence, a class aimed at helping writers develop better action scenes.

The class, and John's teaching style, was such a huge hit, we brought him about for another one: The Lean, Mean Writin' Machine. This workshop is designed to help writers improve their editing skills—essentially, to get their prose down to fighting weight.

Skipp is one of the publishing industry's most colorful characters, so we hit him with our ten questions. Check 'em out.

The first time I ever sat down to consciously craft a short story was in eighth grade, for creative writing class. I think it was called "Choices", and it concerned a guy about to graduate high school, stoked on all the wondrous possibilities that life has set up for him. And then he gets his draft notice. Boom. End of story.

This was during the Viet Nam war, which was televised nightly. And I'd just returned to the States after living for five years in Buenos Aires, Argentina, where even the traffic cops carried machine guns. On the day my dad and I fled the country—June 8, 1970—there were tanks in the streets, rolling through downtown to depose President Ongania. Which they did.

So I'd grown up around guns and blood, and was scared to death of being shipped off to die just because I'd pulled the wrong fucking lottery number. We all were. That's where the story came from. And for a thirteen-year-old, it was pretty good.

It wound up being published in the school newspaper, The Signpost. And I was made Creative Writing Editor. So I got my first editing gig from my first short story, and promptly continued to publish myself for the next two years. What a dick! (laughs)

My first pro sale was to Twilight Zone magazine, shortly after moving to the city that never sleeps. It was a short story called "The Long Ride", about a ghostly New York cab driver who gives free rides to nice people, kills the shit out of bad guys like the asshole that murdered him, and drops an envelope full of cash off for his widow every morning.

When editor T.E.D. Klein bought the story, I went out into the Manhattan night and just wandered for hours down those concrete canyons, going "Yes, yes, yes. We can do this. Just you and me, baby." Talking to the city. Drinking beers wrapped in paper bags.

I carry file cards and pens in my pocket at all times, because you never know when an idea's gonna strike. And if you think you don't need to write it down, cuz you'll remember it later, you're a dope.

But for the real writing, I need to be typing. My pen hand can't begin to keep up with my brain. I can type 70+ words a minute, and that's barely enough. BRAINS ARE FAST.

I also write every night. Every single night. Which is hell on my social life. But I sure get a lot done!

Not writing down all the bedtime stories I made up for my daughters when they were small, and turning them into children's books. Remember what I said about writing things down? What a dope! (laughs) Seriously. I could kick myself.

What kind of catharthis did you achieve from your latest work?

My most recent finished piece is a story called "Depresso the Clown", which should be in the next issue of Shock Totem. Picture a circus clown chained in a psychotic's basement, going "Why, why, WHY?", and you're on the right track.

Like actual clowns, it's kinda funny, and horribly sad. And it reflects how fucking tired I am of all this cultural clown-hate that's taken over since the 80s. I mean, I love Stephen King, but I wanna punch him in the head. Thanks for ruining clowns for the last three generations, Steve!

Cody Goodfellow and I have a screenplay called Willickers, in which the drunken small-town clowns are the pratfalling heroes who save the day. I'm on a campaign to rehabilitate the noble stooge, the valiant buffoon. We need our clowns, man. They show us who we really are.

Well, okay. If I really have to die, I'm hoping my Death is the adorable one from Neil Gaiman's Sandman comics. A drink with her would be a great way to cap things off.

I live in Los Angeles, so my neighborhood churches of choice are Dark Delicacies (the world's best horror book store), Skylight Books (for broad swaths of the classy stuff), Wacko/The Soap Plant/La Luz de Jesus (for freaky shit and gorgeous gift books), and the Iliad Bookshop (my mecca for great used books and research materials).

If I'm elsewhere, I head for the nearest cool bookstore in town. This Friday night, I'm signing at the wonderful Black Cat Books in Manitou Springs, Colorado. It's an annual tradition.

Seriously? There will always be people who don't like it, or don't get it, or just plain don't like me. But that's okay, because I'm not writing for them.

All bad reviews hurt your feelings a little. But the only ones that really smart are the ones where you go, "Omigod, they're right." Otherwise, it's like being snubbed at a party. You either go find someone who enjoys your company, and vice versa, or you're at the wrong party.

Anything having to do with trends makes me want to throttle somebody. Also not a big fan of the Syd Field school of una-plotting. Working according to formula makes your work formulaic. And the only trend you need to follow is the one you're inventing. Otherwise, you're already behind the curve.

WILDCARD: You've written novels, edited anthologies, written screenplays... your career is pretty deep and varied. What do you want to do that you haven't had the opportunity to do yet?

I would like to direct at least a dozen original feature films of quality before my date with Death. So I guess I'd better get crackin'!

This is a proof-of-concept trailer for The Long Last Call, an in-development horror feature based on the novel by Skipp, co-directed by him and award-winning filmmaker Andrew Kasch (Never Sleep Again: The Elm St. Legacy). It's NSFW.

I watched the Vimeo clip. It's great but I don't see what makes it bizarro. It looks like noir to me.