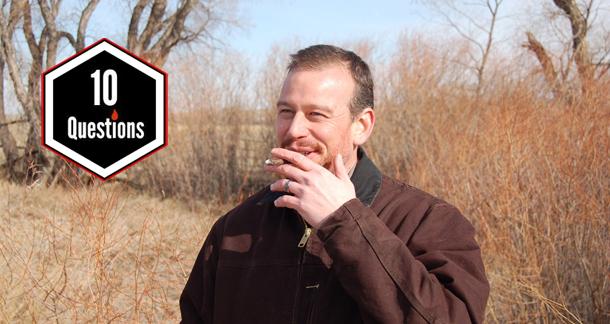 When I was reading Benjamin Whitmer’s debut novel, Pike, the first time, I made a comment on social media how I felt like I needed to take a scalding hot bath and scrub myself with bleach and steel wool to keep reading. I didn’t mean this statement to be an insult, far from it. But there are scenes in certain novels and stories—such as Blood Meridian By Cormac McCarthy and Requiem for a Dream By Hubert Shelby Jr.—of such power and uncompromising realism, that once you’ve read them, you can never unimagined them. They’re now a part of you, and they’re filthy and full of heartbreak. And for me, as a fairly jaded reader, it’s a true rarity when I’m affected by a scene in a novel so much that I have to put it down and take a couple of days off from it. This is also how I know when a writer is truly something unique.

Benjamin Whitmer’s latest, Cry Father, is a gut punch of raw storytelling power. A novel of fathers and sons, and the constant—and at times emotionally crippling—mistakes both make. Much like Whitmer’s first novel, it is absolutely uncompromising and one of 2014's must read novels.

You know what, I don’t think I have any idea. I wrote a bunch of stories in my late teens and twenties, just trying to figure out some kind of voice, but I don’t remember much about them. I know I sent them out religiously, and even published a few in small punk rock and literary zines. But all of those venues are defunct by now, so nobody’ll ever see them, thank God.

Here’s a useful piece of blanket advice for writers: Cultivate friendships with interesting people. So you can steal their stories.

This one I do remember. One of my best friends, Matteo Gregor, took me to a fancy restaurant in the village of Yellow Springs, Ohio and bought me a drink. It was one of those terrible short stories, and it was a tiny magazine, but it was a great moment. I was maybe 21 years old and I figured it’d only be a year or so before I had a book out. I was only off by a couple of decades, give or take.

A computer. I need a keyboard, that’s the main thing. My mother’s a carpenter (among other things) and she told me once that when she gets stuck she’ll just let her hands do the thinking. I need a keyboard to do that when I’m writing. Also, I’m an inveterate tinkerer, so I have to have the ability to rewrite sentences until my brains leak out of my ears. That’s easiest to do on a computer.

I’ve made a bunch of them. My latest was a seven year project, a historical novel. I screwed it up starting out and instead of fixing what was wrong I just kept piling more words on top, hoping to write over it. Of course what I ended up with was a complete mess. Now it’s buried because I hate it too much to look at it. Luckily I wrote two other books while working on it.

George Washington Hayduke III, hands down. Though any explanation as to why would earn me an FBI file.

Probably the same one I always have, which has to do with realizing how much I love my heavily damaged, disillusioned, drug-addled and irredeemable characters. And how much, for whatever reason, I need to spend time in their company. I try not to think too much about that, though.

Everywhere. I’m down by Tattered Cover a lot, so I buy books there all the time. But the closest bookstore to where I live is Barnes & Noble, so they get some of my business. But if there’s something specific and harder-to-find that I need I usually order it from Amazon. And, of course, I seldom pass a used bookstore. I also live within walking distance of a library which orders almost everything I ask for, so I use that a lot when I’m broke.

All my bad reviews seem to say some variation of the same thing. The book’s too violent, too dark, the characters are too flawed, etc. I just kind of get amused. That’s what I write, y’know? It’s like buying a red car and criticizing it for being too red. Someday I’ll get a bad review that takes the things I care about to task, and then maybe I’ll be upset, but right now they’re pretty easy to ignore.

Also, it makes it easier that I don’t write the kind of books that’re supposed to appeal to everybody. If everybody liked what I did, that’d make me real nervous.

That’s a hard one to answer, just because there’s so much advice out there. I pathologically ignore it all. I would say that any blanket advice that goes beyond “write a lot and read more” is something I’d be very suspicious of. I think every writer has the right to do it their own way and make their own mistakes. The books I like are the ones where the writer’s trying to put their whole ass on the page, where there’s something big at stake. And when writers are after big stakes there’ll be some flaws. I don’t have a whole lot of patience for fiction calculated for a market or that looks like an exercise, no matter how technically brilliant.

Of course, if I’d taken some of the writing advice that’s out there, maybe I wouldn’t be screwing up seven year projects. So you should definitely take anything I say with a grain of salt.

Your protagonist in Cry Father, Patterson Wells, more or less lives “off the grid” and works clearing disaster areas. What kind of research went into learning about this kind of work, and have you ever worked this kind of job yourself?

I grew up pretty much off the grid. There were stretches where we didn’t have electricity or running water, and the places we lived were about as rural as you can get. We also logged our own wood and sold it, so I know a little bit about chainsaws and the like. (Although most of my job as a kid was to run for help if one of the adults cut their hand off.) And though I haven’t done the kind of tree-climbing in disaster areas that Patterson has, my oldest friend, Lucas Bogan, has. So I stole some stories from him.

Come to think, here’s a useful piece of blanket advice for writers: Cultivate friendships with interesting people. So you can steal their stories.

Steven Schwartz from Chicago is reading The Fever by Megan Abbott September 4, 2014 - 9:00pm

Great book, great interview.  You got the initial impact of reading Sir Whitmer down pat.  It is more than just a read.  LIke Woodrell, it is an experience.  Cry Father is the cats ass and thats no lie.

These sound like my kind of books; I'll add them to my ever growing pile sometime soon.

T.D. Brooking from California is reading Black Wings has my Angel by Elliott Chaze March 8, 2018 - 8:48pm

I've read thousands & thousands of writer advice words, but NONE as simple, profound & utilitarian as the last line of this interview.

Is it poor form to send hugs & kisses as thanks?  So what:  xoxoxo.