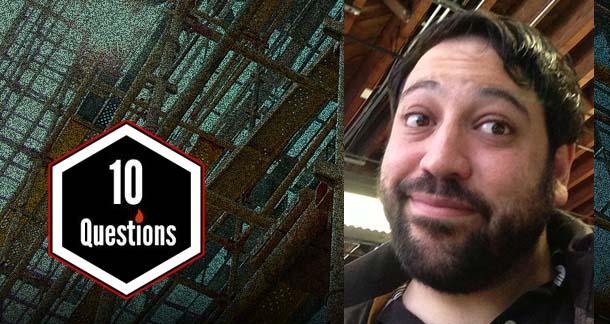 Not faint praise. Here's the gist:

Lenard Sikophsky’s father has been feeding him plutonium since the age of six in the hopes of making him the world’s first bona fide superhero. First, he must pass the unusual tests of manhood locked in the centuries old tomb, The Manaton, a secret relic passed down for generations. Falling in love with the beautiful, compulsively suicidal Laura Moskowitz doesn’t make his life any easier. But with the guidance of the Sikophsky men, the antiquated rulebook, and of course a healthy amount of plutonium, Lenard accepts his fate as an exactor of justice. . . .

Twenty years later, Lenard’s son Nemo is introduced to the same destiny as his father, only this time the violent entity called THEY are in dangerous pursuit. Lenard’s life and the legacy of his family are put to the test when he is forced to defend everything he loves.

Sattin is also our latest instructor, leading the two-week workshop Nuts & Bolts, aimed at teach you how to lay the groundwork for starting a novel—essentially, how to ground your characters in a believable world, so you can proceed with steady footing. Learn more about that here.

And you can learn more about Sattin by reading his answers to our ten questions...

It was called The Ring of Shanalacas—basically a mishmash of The Lord of the Rings, The Sword of Shanara, and the PC edition of Eye of the Beholder 2. The only positive thing I can say for this prepubescent labor of puppy love is that I took to a fairly regular schedule to urge it towards completion, teaching me early on that writing a story requires, above all things, adhering to discipline.

There are still a lot of literary authors who look down upon elements of science fiction, speculative fiction, horror, fantasy, etc, with disdain, and encourage new authors to effectively close their minds off to effective narrative tools.

Thinking it lost for years, the pages resurfaced just three months ago in a box filled with artifacts from my childhood my mother had stowed away prior to her passing. I read it and laughed at myself, somewhat delighted at my ability to have been such a shameless idea thief.

With good food, friends, and intoxicants.

Under the controlled influence of MDMA.

Kidding. I write on my totally conventional MacBook Pro laptop, well caffeinated, preferably beginning around 10 a.m. on a good day, ending when I feel like I’ve been sufficiently productive.

Editing is a different story. I try not to edit on my computer, printing out the pages instead and going to them with a pen. Doing so lends me some needed distance from the story so that I won’t get in my own way. Editing on a computer… you can disappear a little too deep inside what you’re working on. I’m not sure exactly why this is. Maybe because it’s easy—too easy—to make alterations.

That’s a tough question. I think that I might have started earlier, and wouldn’t have let myself get sidetracked by other possibilities. I knew I wanted to write from a fairly early age, but tested my resolve with unnecessary forays into various lines of work/study that turned out to be banal. I suppose there’s a chance I was ‘enriched’ by the process, but I’m more inclined to think I wasted time.

With League of Somebodies, I was stuck after finishing the first major movement of the narrative, thinking I had something truly worthwhile but having no idea how to keep the momentum going. I wrote hundreds of pages that amounted to nothing from that point for months, a teetering pylon of trial and error, of contrived situational comedies that drove me further from the story’s path until I was lost, wandering, and searching for breadcrumbs in the evil grove of mediocre narrative.

Then I discovered something: that plot didn’t have to necessarily follow a set path; I’d read Specimen Days by Michael Cunningham and was impressed with the way in which the author repeated the same narrative over three separate time periods, with three separate characters. I knew my book couldn’t translate his structure verbatim, but it could borrow, using a three part, generation-spanning model to expand upon one of the novel’s themes of following, hating, and reinventing tradition. Stumbling upon this structure brought my novel to life, and thus brought me to the brink of elation. A feeling only next to discovery. Catharsis through and through.

Anywhere they’re sold! But I particularly like Powell’s Books in Portland, Diesel Books in Oakland, CA, and the Tattered Cover in Denver, CO.

That genre fiction is a shitty way to express one’s self as a writer. There are still a lot of literary authors who look down upon elements of science fiction, speculative fiction, horror, fantasy, etc, with disdain, and encourage new authors to effectively close their minds off to effective narrative tools. Never has there been a more well worn trope—that for some reason rigidity, stupidity, and an inability to handle criticism is the key to writing good fiction. Writers shouldn’t be myopic. It’s bad for books, and it’s bad for culture in general.

WILDCARD: League of Somebodies is a satire of superhero culture. Who's your favorite superhero, and why?

Oh, not that question! I mean, I get it, but I hate it. Mostly because I suck at answering it. Example below:

My favorite superhero is Superman/Batman. Yes, I know I gave you two, but the reason why is that in many ways they are one in the same. Yin and Yang. Light and Darkness. Forgiveness and Vengeance. Cookies and Drugs. The reason I’m split is that I am schizophrenically in love with both of these dudes, involved in a polyandrous relationship with both the Man of Tomorrow, with his invulnerable body and even more invulnerable warmth (thanks for missing that boat, Zack Snyder), and the Dark Knight, with his commitment to inhabiting the shadows so that he might best defeat them. It’s a love triangle I’ll never escape, so I gave up trying long ago.