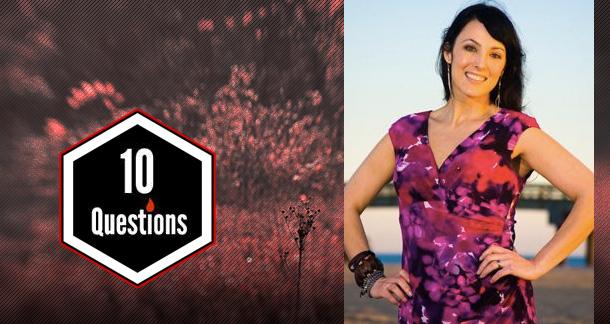 As a reader, paranormal romance isn't really in my wheelhouse. But I'd been hearing good things about Delilah S. Dawson's work. Plus, she's a hoot on Twitter. So I picked up Wicked As They Come, the first entry in her Blud series, and within the first hundred pages I knew two things:

Her writing is incredibly funny and self-assured, and her world-building is accomplished. She creates a living, breathing reality that mines the best from a wide range of genres—from horror to western to steampunk—to create something wholly unique.

Besides the Blud series, Delilah has got some YA titles on the horizon: Servants of the Storm, a southern gothic fantasy, will be released later this year, and The Hit, the story of a teen assassin in a bank-owned America, comes out in 2015. And she recently took a jaunt into self-publishing, putting out a "geekrotia" short under a pen name. In The Lumberfox, the safe word, apparently, is "Wookiee."

And starting April 17, she'll teach you how to Become a God. Sun robes not included.

If we're getting in the way-back machine, we're talking about The Jungle and Its Life, punctuation the sole fault of me, age 6. Spoiler alert: in the end, the explorer was bitten by a cobra and died.

If you're asking about my first viable book, it was a quirky women's fiction called Ferrytale about a married woman who accidentally slept with Zeus and started seeing mythological creatures everywhere. I shelved it after several kind literary agents explained (during the query process) that it was fatally flawed, as women don't like to read about infidelity, no matter how historically supported and innocent it might be. And then I threw it deep into a drawer and started the next book.

The worst advice I see is anything that recommends itself as THE ONLY WAY. Every writer has a different path, and there are infinite ways to write, to find an agent, and to get published. If there was A SECRET, it wouldn't be a secret at all.

My first sale was the three-book Blud series to Pocket, and I celebrated by getting all gussied up and going to a fancy restaurant to eat Carolina rabbit. Since the book includes bloodthirsty bunnies, it just seemed right. Victory has never tasted so adorably delicious.

Wait, who told you about the blood?

I start with a story idea and cogitate on it until I'm about to explode. I don't start writing until I know the main character(s) inside and out, know the instigating conflict, know the climax (pun sometimes intended), and know how it will end. I open and format the doc, type in whatever notes I'm afraid I'll forget, do a manual page break, and start writing. My first drafts are complete crap, written straight through from beginning to end without stopping, as fast as possible, in one to three months. Then I save it under a new name, let it rest for a month or so, and go back in for revisions. After 3 or 4 edits, I send it to my agent, then do several more drafts to nail down her suggestions. Then it either goes on submission to editors or, if written on spec, goes directly to the editor who bought it. I also keep a Moleskine around for taking notes, especially when I'm deep in the meat of the draft and start discovering how everything fits together. My subconscious is my greatest ally, and I discover so much as I connect the dots of my journey scene by scene.

I spent most of my life thinking that novelists were called to their profession, like nuns or doctors. I didn't know I was capable of writing a book until I was so beyond exhausted and low on sleep (thanks to baby #2) that my brain basically broke. All the fear and self-doubt crumbled away, and that's when I was free to write my first book at the age of 32.

I'm working on a secret project that's dark, twisty, and lyrical. It's like nothing I've written so far. Instead of being driven by adventure, romance, or a ticking clock, it's more like descending into a beautiful dream that subtly becomes horror and madness. The fact that I find that soothing is a little unnerving.

I'd like to go to one of Delilah Drummond's wild parties from Deanna Raybourn's latest series, including A Spear of Summer Grass and City of Jasmine. I want to meet the other Delilah, plus Ryder and Evie and Aunt Dove and Wally and Gabriel. Maybe Evie would take me up in the Jolly Roger for a couple of barrel rolls. These characters are such a fantastic mix of fun, glitz, glamour, snark, sorrow, and intelligence that I can't imagine how much fun the conversations would be once the champagne kicked in. Deanna could come, too.

All over! I have the Kindle and Nook apps on my iPad, and I love to buy from indie booksellers and get signed books from authors at cons. Whenever a friend has a eBook go on sale, I tend to retweet, share, and buy it, even if I own it in paperback form. $1 to support a friend is a great investment, as far as I'm concerned. These days, I tend to only keep the books that are signed and meaningful and donate the rest.

Okay, so first of all, I go out of my way *not* to read bad reviews. I want reviews to be a safe place for readers, and I want to stay positive, so I definitely don't go looking. If someone on Twitter posts a link and specifically @s me, I try to read it and thank them. But so far, I haven't yet read a negative review that helped me in any way as a writer. They tend to be more personal issues or complaints about the book the reader *wishes* they had read, and I can't do anything about that. I can only write the best books in my power.

The worst advice I see is anything that recommends itself as THE ONLY WAY. Every writer has a different path, and there are infinite ways to write, to find an agent, and to get published. If there was A SECRET, it wouldn't be a secret at all.

Oh! And the advice that says "break the rules to stand out". Because this isn't job interview advice from Sassy in 1990. If an agent goes to the trouble to post their submission guidelines, you're not going to win their goodwill by blatantly ignoring them or querying them on Twitter.

WILDCARD: You just published a "geekrotica" short under a pen name. What's the self-publishing experience been like thus far, and do you plan to stick with it? Bonus question! Any lessons you've learned right off the bat?

Yes. Get stuck in the next blizzard with a foodie Lumberfox.

Thus far, it's been very fun and liberating. I've learned that I prefer being an author to being a publisher—I like letting someone with more experience handle covers, blurbs, copyediting, and formatting. And I like it better when somebody else foots the bill for all that, too. At the same time, it's pretty empowering to upload your book and have it for sale within twelve hours, when my traditional publishing schedules have a one- to two-year lead time. So far, self-pub definitely doesn't pay as well as traditional, but everything I've read says that it takes a while—and several books—to build any sort of momentum. Geekrotica Level 2 should be out in the next two weeks to put that theory to work. If you like gingers in kilts, The Avengers, and the movie Secretary, you'll dig The Superfox. Or if you just want to see how many geek references you can catch amid the C and P words.

That being said, traditional publishing wouldn't go for zippy little stories about geeks spouting Firefly quotes and having crazy monkey sex during a blizzard. I mean, "Welcome to Hothlanta; the safe word is Wookiee" wouldn't make it onto the cover of any book in Barnes and Noble, much less a title like The Lumberfox. So I like that there's an option to give it a try, and I really like that there appears to be an audience for it.

Still, I'm very glad for the path I've taken. I wouldn't be the writer I am today without the phenomenal input of my agent, Kate McKean, or the solid direction of my editors. Every rejection, challenge, STET, and nine-page-long edit letter has taught me things that I never would've learned if I'd just uploaded Ferrytale to Smashwords and stared at the stats all day, hoping for a miracle. I plan to release 3 Geekrotica stories and then, one day, finish the story I started with Wicked as They Come.

Joshua Chaplinsky from New York is reading a lot more during the quarantine March 26, 2014 - 9:29am

Class Director
Rob from New York City is reading at a fast enough pace it would be cumbersome to update this March 26, 2014 - 10:13am

I can see how you might be misled, Josh, but I don't have that many forearm tattoos.

Ever since I learned about her class, I've been searching for more info about her. Thanks for the great article!