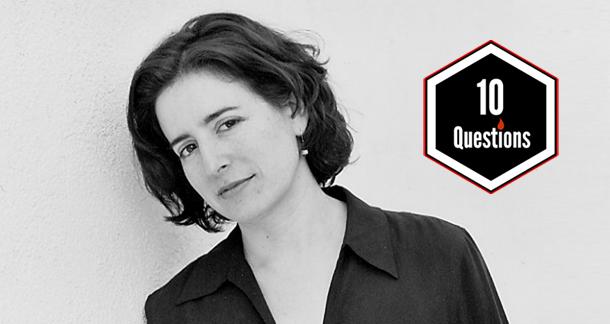 Aimee Bender’s most recent novel, The Particular Sadness of Lemon Cake, tells the story of Rose, a nine year-old girl who discovers she can taste emotion when she bites into her mother’s homemade cake. Rose’s exploration of her new ability and the insight it gives her into the lives of the people around her is a beautiful amalgam of the heartfelt and strange.

Bender’s previous works include the novel An Invisible Sign of My Own, and two collections of stories, Willful Creatures and The Girl in the Flammable Skirt. She has been featured in Granta, GQ, Harper's, Tin House, McSweeney's, and The Paris Review, among others. You can hear her stories on This American Life and read about her writing practice in O Magazine. She has received two Pushcart prizes and has been nominated for TipTree and Shirley Jackson awards. In 2010, she won the SCIBA award for best fiction for The Particular Sadness of Lemon Cake. Bender teaches creative writing at the University of Southern California.

There was a very small (as in circulation twenty or something) journal in San Diego, where I went to undergrad, that published a story and I think they paid me $10, which I used to buy a Jamaica Kincaid book, Annie John. It was the first money I made for anything I'd written, the first place where something got published that people might have seen or read. I think I wanted to buy a book because someone had told me, "Use the money to have something tangible that you can hold on to as a memory." In terms of celebrating, I'm sure there was happy whooping, and the excitement of seeing my name in print, which was thrilling.

I'm pretty much computer all the way. Occasionally, a notebook if I'm in a situation where the computer doesn't work. I think I'm faster and better at shaping something in typed lettering.

My biggest mistake has been clamping down on possibility and being overly susceptible to rules and statements made by very smart people about writing that have always felt smart but maybe aren't at all useful. Initially, I was extremely susceptible to that and I had to break out of it. I still find I'll run into some article and it will bother me, and I'll have to exorcise it in order to get work done. There are a lot of directive, prescriptive ideas about writing. I don't think they're very helpful, generally.

That would be The Particular Sadness of Lemon Cake. It was a heavy book to write, and it made me sad, often, writing it. I think there was a catharsis, but it didn't feel like a cleansing catharsis, which a catharsis should be. It felt almost like two steps before the catharsis, a half catharsis. I remember when I finished the final draft of it, I felt really stirred up, and I was happy that it was done, and it said what I wanted it to say, and that felt good. I felt lighter even though the underlying feeling of the book for me was a kind of heaviness.

Salinger characters pop into my mind first. It wouldn't be someone from Catcher in the Rye, it would be someone from Nine Stories. One of my favorite stories in that is "De Daumier-Smith’s Blue Period." There's that kid who is writing a nun letters about art. He's this posturing, over-the-top kid, but he has such a deep sweetness and sadness inside. I wouldn't mind meeting that character. But he also would be a character in great pain and not totally aware of his great pain, so that might be hard to be around! Maybe the minister in Gilead, Marilynne Robinson's book, the old man reflecting on his life. He seemed like a very lovely character to spend time with. He was a pretty deep guy, so maybe I'd pick him.

I buy my books generally at independent bookstores, brick and mortars here like Skylight and Book Soup or Powells if I'm getting them online. I try to avoid Amazon; I kind of hate it.

Bad reviews are tough. I think bad reviews are easier to discount when they seem really off. Sometimes a bad review will try to tell me what my motivation was in writing something and that's really annoying. I think I know my motivations pretty well, and if I can see that that's wrong, then I feel like they read something different than what I wrote. The harder bad reviews are the ones that feel like they do hit the mark, and they're noticing something that I also think needs work. In some ways those are also very constructive, too. It's like being seen for who you are and your flawed self, which is loving in its way, depending on the tone.

I think the worst advice generally is, "I have this secret and you need to do it my way if you want to get it right." That can show up in many different forms. A lot of times, students will come in (it happened twice today) feeling worried that if they jump around they're never going to finish anything, and never be focused enough, and they will just end up with a cacophony of writing. There are students that are scattered, who need to see something through to the finish, but I would say there are possibly more who do not entertain the leaps of the mind that need to be nurtured, and this desire to finish becomes more about being a good student than about finishing something interesting. Where does work ethic fit in with writing? I think that's pretty complicated from one writer to the next. You need some kind of work ethic, but what does it look like for you?

WILDCARD: Fantastical elements frequently appear in your stories, especially in Lemon Cake. What led you down this particular path with your writing?

It was more about letting myself than going down a path because I just like that kind of storytelling. I like it as a reader, I liked it as a child, I like it in other art forms. I like metaphor and I like strangeness as a way into emotion. It's just something I respond to very viscerally. I think I was fighting against it for a long time because I felt it wasn't serious fiction. It was more about relaxing into my own body and feeling like this is where I want this story to go and maybe no one will think it's serious fiction, but it's worth a test to see what they think. Then the surprise for me was that people responded better to that than my faked-out, tricked-up realistic fiction.

I think if something's really direct, sometimes I have a harder time accessing what's underneath it as a reader. Cynthia Ozick has this great story, "The Shawl," about the Holocaust, but it's told almost as a fairy tale. The language is very beautiful and it made me feel more horror than I felt reading Night by Elie Wiesel, which was so direct with the horror. Somehow, I couldn’t see it until it was juxtaposed with beauty and the two together created the feeling in me. I think there's something about what do you put next, what do you put in the soup to bring out one flavor or another, and it works better for me if there's a sharp contrast of some kind.

I am a really big fan of her Willful Creatures especially.

It's a little disappointing these articles are always stock questions save here for the reprieve of one single question written specifically for the interviewee. Seems a waste to have such great writers answer such generic questions. Still, great insights.