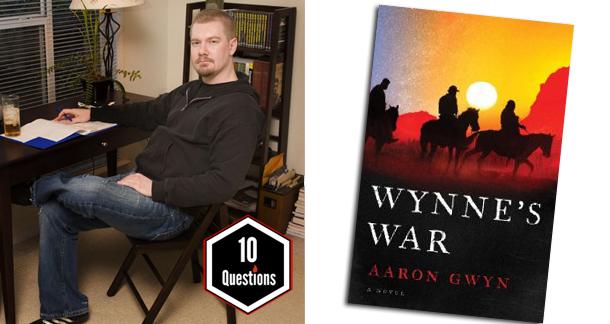 I first read Aaron Gwyn in Esquire's gone-too-soon Fiction For Men eZine. His chilling 2nd person short story, "You and Me and the Devil Makes Three", was one of the most innovative and stark pieces of short fiction I’d run across in years. Based solely on the strength of that story, I bought Gwyn’s collection, Dog on the Cross. The book was every bit as striking, albeit the tone and subject matter were far different. The stories of Dog on the Cross exist somewhere between the gothic tones of William Gay and the religious fever of Flannery O'Connor. In other words: Grim, hilarious, poetic, utterly alive, and teeming with the sights and sounds of Pentecostal tent revivals.

Fast-forward to Gwyn's second novel, the Afghanistan war epic, Wynne's War. The story follows Corporal Elijah Russell, a young Army Ranger and master horseback rider, who is assigned to an elite Special Forces unit preparing to stage a secret mission. His job is to train the small unit—commanded by the Kurtzesque anti-hero of the novel, Captain Wynne—of Green Berets to traverse the dangerous mountain terrain of eastern  Afghanistan on horseback.  As with Dog on the Cross, Gwyn brings a taunt, poetic intensity to his memorable cast of characters, crafting a deft literary novel with thriller like pacing. For fans of Cormac McCarthy's Border trilogy and Philipp Myer's The Son, Wynne's War is a must read.

The first story I wrote was about an autistic boy who cuts his brother’s head off with an axe.  I must have deleted it at some point, and thrown away the hard copy.  I’m a big believer in throwing stuff away.  A lot of writers save everything they write.  Not me.  Only way I save anything is if it gets into print, and even then I only keep a copy of the magazine or book.  I get rid of drafts.

I think my girlfriend and I went out for dinner.  This would’ve been when I lived in Denver, and there was this Mexican joint we really liked.  Afterwards, I came home and worried about whether or not I’d ever sell anything else.

I write by hand on printer paper.  100 words a day, every day.  Then I rewrite/revise, copying a cleaner, neater draft onto another sheet of paper.  I number the page and put it on the stack.  At some point, I revisit those pages, and then, if they’re any good, I type everything into a Word file on my laptop.  Or hunt and peck, rather.  I never learned to type.

You want to write about a NASCAR driver, but have no NASCAR experience?  Go talk to some NASCAR drivers, get them to tell you their stories.  Go interview members of the pit crew.

Publishing my first novel (The World Beneath).  It’s an awful book, and if I could, I’d take it back.  Thankfully, almost no one read it.

I don’t drink, but I’d make an exception for the Judge from Cormac McCarthy’s Blood Meridian.  He might skin me alive, but we’d have a great conversation before he got around to it.

I was able to pay off some of my student loan debt.  That was pretty catharsis-y.

I don’t read reviews that aren’t positive.  It’s bad for you.

“Write what you know.”  Most young writers hear this as “write what you already know,” and most young writers don’t have much life experience.  A better way to come at this is “know what you write.”  You want to write about a NASCAR driver, but have no NASCAR experience?  Go talk to some NASCAR drivers, get them to tell you their stories.  Go interview members of the pit crew.  Find a way to get behind the wheel of a race car (if only just to sit there).  Feel the way the seat presses against your thighs, the curve of the wheel beneath your palms.  How does the interior smell?  How limited is your visibility through those helmets?  Acquire the requisite sense memories.  Then do the reading, learn the specs, the techniques.  Don’t write fiction to “express yourself.”  If you want to do that, go be a poet.  Fiction writing is about expressing someone else, trying on the skin of someone completely different from yourself.

How much research went into the military detail of "Wynne's War"?

I went at research like the maniac I am, starting with stacks of memoirs by veterans of the Iraq and Afghanistan Wars, then field manuals like The U.S. Army/Marine Corps Counterinsurgency Field Manual.  I carried The Ranger Handbook around in my backpack for three years.  I grew up out in the country hunting and shooting, but I decided I needed more weapons training/knowledge, so I bought an M4A3 carbine (the standard-issue rifle for our service members), learned to operate/(dis)(re)assemble/clean it, went through carbine/combatives courses available to civilians (you wouldn’t believe the kind of training a civilian can get these days).  I did a “Special Operations Fitness” regimen for two years and ended up with a permanent rotator cuff injury, a pulled hamstring (that I’m still in physical therapy for), and tendonitis in my right biceps.  I talked extensively with former Green Berets and Army Rangers, with members of the 82nd Airborne Division (my grandfather’s old unit).  I made friends with a former mortar operator who served in the 509th Infantry Regiment in Iraq.  I have two more buddies who are ex-CIA contractors, one who’s a Navy SEAL, several who are Marines.  The veterans who worked with me were incredibly generous: two of them went through the novel manuscript, provided notes and corrections.  Any mistakes in the finished product are entirely mine.

I've never heard of this guy, but imma check his stuff out solely because he wants to drink with Judge Holden.

His dedication to his research inspires me to want to delve deeper into my own.