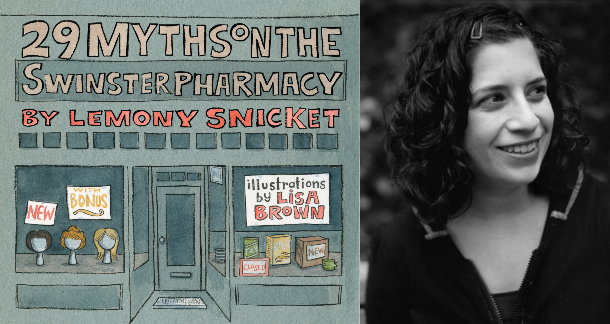 One the best parts of becoming a parent is discovering a whole new world of kid's books—which have evolved in amazing ways since I was a child. I enjoy finding unique books for my daughter as much as—and possibly more than—I enjoy finding them for myself! It could be the instant gratification with the kid's books and the decreased chance that they will sit idle and unread on my bookshelf for years.

A few years ago, I visited McSweeney's table at Wordstock and completely fell in love with Lisa Brown's Baby Be of Use series, which featured great titles such as Baby Make Me Breakfast, Baby Do My Banking, Baby Fix My Car, Baby Plan My Wedding, and Baby Get Me Some Lovin’. I took home a copy of Baby Fix My Car and plan to educate my tiny daughter on the ins and outs of car maintenance, much as my dad did for me when I was a kid. (Though, by the time she drives, self-parking will probably be standard and changing one's own oil will be as old school as shoeing a horse.)

Well, Lisa Brown's witty artwork appears in a new Lemony Snicket title called 29 Myths on the Swinster Pharmacy, which captures perfectly the curiosity of children about supposedly haunted houses or creepy-looking businesses that are a part of the adult world. It features children who gather evidence about the Swinster Pharmacy in an attempt to prove that it is—or isn't—just a regular store frequented by the clueless adults who promise there in nothing sinister about it.

I just love the book and Lisa's artwork is fantastic, so I jumped at the chance to interview her. Here are her answers to our 10 Questions:

What was the first story you ever illustrated, and what happened to it?

I’ve been illustrating my entire life, so it’s difficult to say which one was first. There were lots of elementary school attempts, for instance. I used to have a lot of trouble finishing what I began. I started illustrating The Swinster Pharmacy in 1993. Daniel and I had these friends who made little books together in lieu of Christmas cards every year, and we thought, “We should do that.” So I illustrated a poem he had written in college, fully intending to xerox it off and send it out. That didn’t happen. Well, it did, but 20 years later.

When you sold your first piece of work, how did you celebrate?

Getting to do something is the most important thing. Something that people will see.

Hmmmm. I’m guessing the first piece I sold was an editorial illustration for a small business magazine in San Francisco. People with little heads in big suits, that sorta thing. And I’m guessing that my boyfriend (now husband and collaborator) bought me a drink at our local bar, Dr. Bombay’s. The drink was called Pixie Piss, and it was green.

Tell us about your process: Pencil, paper, computer, paint, human blood when the moon is full... how do you come up with the illustrations? What comes first? The pictures or the words?

Usually words. I’m a big word gal. With the art, my technique evolves. I keep trying new things until I’m as satisfied as I ever get, which is not-that-satisfied. The Swinster Pharmacy was created with brush and ink on paper with watercolor. Then I scanned the paintings into the computer and applied collage elements in Photoshop. I’ve been really loving the digital/hand one-two punch.

What's the biggest mistake you've made as an author/illustrator?

Not sketching enough. Not sketching without an assignment or a deadline. I have always dragged a sketchbook around with me, but until recently, it just sat in my bag. Now, I try to draw whenever I have any downtime at all: during meals, lectures, concerts, conversations, while watching TV. Since the New Year, I’ve started to post a sketch a day on my Tumblr blog. I can’t imagine what I’d been doing with my time before that.

What kind of catharsis did you achieve from your latest work—'29 Myths on the Swinster Pharmacy'?

The catharsis was finally finishing a project that I had begun to work on in 1993. Phew.

Ogred Weary, Edward Gorey’s alter ego. Because I think that Edward Gorey himself would have been a loverly drinking companion.

I unrepentantly drop wads of cash at almost every indie bookstore in San Francisco: Booksmith, Green Apple, Books Inc., City Lights, Dog-eared. I have favorite indies everywhere I spend any bits of time: Reading Frenzy in Portland, OR, Powerhouse Arena in Brooklyn, McNally Jackson and Books of Wonder in NYC, Titcomb’s on Cape Cod.

Not to compromise. I’m not the kind of artist who gets off on doing art in a vacuum. If no one ever sees what I’ve done, I’ve failed. And sometimes, to be able to produce something that can get out into the public sphere, you have to compromise, work as a team, or give up some part of your initial artistic vision. It’s okay to do that. Hopefully, you will get lots more chances to make something you are proud of. Getting to do something is the most important thing. Something that people will see.

What superpowers would you choose for yourself, if you were given the choice? Why?

Invisibility, so I could be alone whenever I wanted. I like to be alone. Flight, so I could reach things on the top shelf without having to pull over a stepstool every time. I’d like there to be a parking spot superpower, because I hate looking for parking and I live in the worst place to park in the world. The superpower I do have, the ability to identify obscure character actors in old movies, has turned out to be not as useful as one might have previously imagined.

Lisa Brown is the bestselling author and/or illustrator of a growing number of books for children, teens and new parents, including How to Be, The Latke Who Couldn’t Stop Screaming, and Baby Mix Me a Drink. Her 3 Panel Book Review cartoon ran in the book section of the San Francisco Chronicle. Lisa lives in San Francisco, California with her son and her husband, who is rumored to be Lemony Snicket. To view Lisa’s artwork, visit American Chickens.