You’re A Writer, But Is MasterClass Right For You? 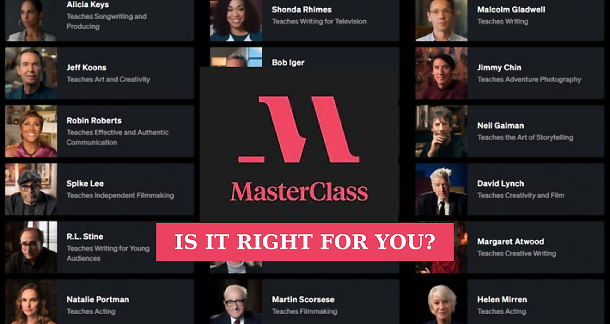 We’ve all seen the two-for-one deal that MasterClass offers around the holidays and experienced the temptation to buy a membership for a friend, so we can use the other to browse the writing courses. But are the classes worth the investment, especially if you’ve already been published? And how much can you really learn from Aaron Sorkin through a video if there’s no opportunity to interact or ask questions? This article seeks to address those concerns and give you a brief overview of some of the sessions offered by their most popular artists. That way, you can decide for yourself.

In many respects, MasterClass was ahead of the curve for the online self-education revolution—while they weren’t the first, they definitely cornered the market on expert teachers. The site was founded in 2014 by David Rogier, when he was still a Stanford University MBA student, and rebranded as MasterClass in 2015 with the help of Aaron Rasmussen. The business model, as we currently know it, initially launched with classes by Dustin Hoffman, Serena Williams, and James Patterson. Currently, a standard course contains between ten and twenty-five video lessons and a running time of two to eight hours.

There are probably more, but it is worth noting that one of the site’s biggest faults is that they don’t categorize stuff well. You almost need to enter knowing what you want, or allow the system to suggest things based on prior selections. Also, as alluded to earlier, the courses don’t include a message board for open questions or student mingling, but they all contain well-researched workbooks that mirror the video lessons section by section. Those workbooks also include practice exercises and recommended readings to reinforce each module. Be advised that even though there is a section of the site titled MasterClass Live, this doesn’t appear to be active. The last archived video is nearly three years old and the only writer listed is Dan Brown.

I point this out, not to disparage, but to ensure that you have the full picture when making your decision. Naturally, there is always something to learn from any situation even, if it is as simple as how to renew inspiration for our craft. Many of the courses teach in that simple vein, but there are others that dig into the creative process and work hard to transcend the medium by inviting writers to explore their rejection letters, outlines, early drafts, et cetera. But either way, you should be clear about your goals and expectations before buying into the site. So with that said, let’s dig into some of the courses and identify what they offer.

David Baldacci and Dan Brown – I found both their classes to be some of the best for providing actionable steps on how to start and finish a full thriller novel. Both novelists provide memorable lessons on how to create characters, build conflict, sustain tension, and develop a significant showdown that leads to a killer finale.

James Patterson – As one of the first offerings developed for the site, this course leans more toward the inspirational side of writing. Most of the advice rests firmly in the beginner level with a focus on writers interested in taking their first steps. Patterson does an excellent job looking back on the experiences that lead him to become a writer, and this is a fantastic one for someone looking to develop the writer mindset.

Judy Blume and R.L. Stine – Both artists are known for their young adult fare and have centered their courses on topics in that area. Blume mostly discusses building characters and developing plots for young audiences while Stine focuses more on idea generation and outlining. Plus, both artists make a point of hewing close to their respective genres, coming-of-age and humorous horror.

Neil Gaiman – Even though the site doesn’t offer courses from a ton of authors (at least in my opinion), they appear to have made the choice to concentrate on a very narrow aspect of what it means to be a writer. So while Gaiman offers a powerful session on storytelling, his classes focus mainly on tips for short stories with little mention of the comics and graphic novels that have also brought him substantial notoriety.

Roxane Gay – Based on the immense production value of the videos, it is often quite clear that the artists are speaking from a script rather than candidly. However, I was shocked at how deeply personal many of them choose to be during their courses, and Roxane Gay is no exception. So in that respect, MasterClass should be commended for making each class unique and giving the writers freedom to express their beliefs. Gay’s course focuses on writing for social change, and she doesn’t shy away from some of the hardships that come with standing up for your convictions.

Joyce Carol Oates – This literary legend has developed a class that focuses on the principles of short fiction through observations of nature and the dark or painful elements of our personal pasts.

Malcolm Gladwell – Since Malcolm Gladwell is best known for Outliers and The Tipping Point, I wasn’t sure what to expect from his course, which is vaguely marketed as how to research stories and “capture big ideas.” However, Gladwell doesn’t disappoint, and he provides insightful lessons on audience engagement, suspense, and drawing connections between disparate ideas.

David Sedaris – Those familiar with Sedaris know that he is a prolific writer of personal essays. And while he does share his productivity secrets, I was more impressed with the story of how he got started. While this may be one of the sparser classes in terms of craft advice, there is a ton to be gained here regarding how to discover what type of stories you want to write and what you’ll need to do to stay motivated as you make the leap from hobbyist to professional.

Margaret Atwood – This course is simply marketed as “creative writing,” but her main lessons focus on how to hook readers and how to use research and historical accuracy to enrich your storytelling. This became a surprise favorite because of all the quirky “write daily” quotes that emerge like, “The wastepaper basket is your friend. It was invented for you by God.”

Salman Rushdie and Amy Tan – While both are paragons in their respective fields of allegoric and cultural storytelling, MasterClass has these literary giants focus on more generalized techniques that apply to writing of all types such as crafting believable characters, developing a narrative point of view, and the revision process.

Joy Harjo and Amanda Gorman – MasterClass does a fantastic job of structuring courses that play to each poet’s strength. Harjo, being the more seasoned artist, leads an academically inclined class focused on language and self-expression. Meanwhile, Gorman, whose oratorical talents wowed the nation at the 2021 inauguration of President Joe Biden, teaches a course on poetry performance—complete with a student case study and performance tool kit.

Playwrighting, Screenwriting, and Writing for Television

Shonda Rhimes and Aaron Sorkin – Unlike most of the novelists, the Hollywood writers include lessons where they work with actors at table reads and writers in group workshops to help viewers better understand how to create compelling story arcs and believable action scenes.

Judd Apatow – I appreciate Apatow’s light-hearted reluctance to teach since it underscores his overall thesis that comedy isn’t something you’re going to learn in a vacuum. He says that you need to get out into the world and practice on people even if you’re working toward writing a screenplay. Yet, Apatow does his best to provide an academic approach by dividing the class into two parts: practical advice for the standup and time-worn screenwriting tips from Sydney Alvin Field.

David Mamet – These courses focus on his work as a dramatist and mostly cover how the approach to elements like character and dialogue take on new meaning when applied to the stage. To this end, his class includes case studies on American Buffalo and Glengarry Glen Ross.

The holiday buy one, get one deal is your best bet if you want to try these courses, because a standalone membership at $180 a year ($15 a month) doesn’t seem worth it to me. Now, this isn’t because the site fails to deliver on the knowledge it promises. On the contrary, I am awed by the caliber of artists as well as their dedication. They clearly care and want their students to learn. I respect, adore, and admire each one of them, and I imagine MasterClass is a boon to self-starters who don’t mind an unmonitored, self-paced course. I just think there is more value in using that money to support the genre professionals we read and work with daily. Courses, like the ones found here at LitReactor, ensure students receive one-on-one attention (often with direct manuscript feedback) and give them the opportunity to hear about real-time publication experiences of someone currently in the trenches. Plus, standard online courses allow for direct interaction with other students in the writing community who may eventually become critique partners and life-long friends. You just can't get that kind of value from a static website.

The Art Of The Rewrite

You’re A Writer, But Is MasterClass Right For You?

What I Learned From 6 Books On Writing Faster