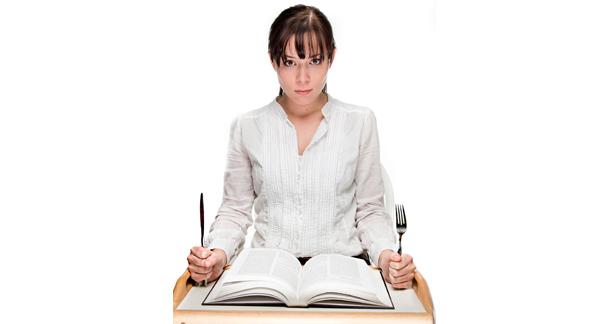 How do you read? We posed the question on Unprintable Episode 9 and discovered we had some questionable habits when it comes to book consumption. Listen to the cast to find out what Josh, Rob and I admitted to and in the meantime decide where you fall on the dietary spectrum of reading types:

Netflix created the phenomenon of binge watching by releasing House of Cards as a batch, but we binge readers could have warned viewers what to expect: work commitments ignored, pets unfed, relationships neglected. Regular readers might binge-consume the Game of Thrones series, but hardened addicts don’t need Tyrion and rampaging dire wolves to fuel their habit. Sloppy romances, pulp thrillers, cheap Westerns, dodgy sci-fi: any kind of series is enough to trigger a binge. Binge-buying from Amazon leads to the binger spending hours working their way through a pile of volumes only to follow this up with shameful episodes of ‘toilet’ reading.

Binge readers usually manage to contain their habit to evenings and weekends, but the compulsive reader’s need to consume print has spiraled out of control, infecting every aspect of their sorry existence. A typical compulsive reader’s day begins with missing their mouth at breakfast because they are reading the back of the cereal packet and graduates to missing their stop on the daily commute because they are engrossed in their Kindle. Tell tale signs of a hardened addiction include a book secreted in an office desk drawer, long and frequent visits to the restroom with a suspiciously rectangular object hidden in a jacket pocket, and mysterious disappearances in the direction of the bookstore at lunchtime.

While binge and compulsive readers set a low bar for their reading material (a decent plot hook is enough to get them started), gourmets set the bar so high you would need an oxygen mask to reach it. Gourmets will only crack open the spine of a book if it is 1) generally regarded as a classic and; 2) a handsome addition to their immaculately dusted shelves. Excellent examples of what the gourmet considers acceptable fare can be found in the Folio Society and Penguin Hardcover Classics range. Gourmets take in their books slowly and only after careful preparation. No skuzzy Android apps for them – they usually have a special reading chair, with a lamp adjusted to the correct brightness and angle and a waiter on hand to deliver snacks. Because they never read anything written after 1950, gourmets are usually also Grammar Nazis, nostalgically clinging to rules they imbibed in their youth the way food gourmets promote the virtues of heirloom tomatoes and wine bottled in the time of Genghis Khan.

Foodies are specialists, like the gourmet, but unlike them do not regard the word ‘modern’ the way the rest of us regard a nematode worm. Foodies hanker after the obscure and the scarce. A favourite habit is to take a well known author and only read the works they are not famous for: Bram Stoker’s Primrose Path or Ray Bradbury’s Dandelion Wine, the same way a food-foodie will imbibe an ordinary food-stuff like coffee, but only if it is made from beans which have first passed through the intestine of a civet cat. Foodie-readers also like to read obscure examples of mainstream literature: the nearly unobtainable murder mystery Blood in the Parlour by Dorothy Dunbar instead of Strong Poison by Dorothy L Sayers, for example. They will occasionally read a popular work, but only if it is 1) a first edition 2) signed by the author and 3) the only known copy of the translation into the click-language of the Kalahari Bushpeople.

For the Eat Your Greenser, literature is to the mind what vegetables are to the small intestine. While most of us regard reading as a pleasure, to the EYGer it is an opportunity to give their frontal lobe a thorough workout. You have to be careful what you recommend to an EYGer because once they have started a book – however impenetrable, however dull – they will finish it. They will plod through Infinite Jest, or Gravity’s Rainbow, or JR by William Gaddis, page by soul-deadening page, refusing all other nourishment until what is set before them is done, in the belief not only that once you have started a thing you should finish it, but also with the Calvinistic sense that enjoyment is a barrier to self-improvement. EYGers can be tough dinner party companions because of their scornful rejection of bookstuffs – romances, thrillers - the rest of us enjoy, seeing these as the kind of empty calories which will only end up giving you the cerebral equivalent of a spare tire.

Probably because they were intimidated by Eat Your Greensers at a sensitive point in their youthful development, the Secret Snacker desperately wants the world to believe they only read Big Serious Books of the kind that give the rest of us a tension headache after sentence #2. Trouble is, these books give the Secret Snacker a tension headache too and they would much prefer to read the kind of light, easily digested fluff on which the EYGers rain down opprobrium. Secret Snackers therefore carry around the kind of serious looking books that have as a cover illustration classical paintings or the bust of a Greek philosopher looking pained, while cunningly concealed within is Club Dead by Charlaine Harris. Visit a Secret Snacker’s apartment and you will find shelves stacked with Dickens and Baudelaire. Peek inside the fridge and tucked at the back behind the organic watercress juice will be a pile of Sophie Kinsella just waiting to be unwrapped and gobbled up.

The Omnivore tries a bit of everything, but specializes in nothing. They occasionally dine out on fine food, like the gourmet, but don’t make a lifestyle of it. Some of the foodie’s choices attract them, but they draw the line at anything too outlandish. They start the books the EYGers finish, but give up when the chewing gets too tough and unlike the Secret Snacker, the books on their shelves are all ones they have read.

At times in the past, I’ve fallen into all of these categories. Which type of reader, or combination of readers are you?

if it's a completed run on a comic, I'm a total binger.

Robert Johnston from Florida is reading Cataclysm Baby April 9, 2013 - 7:36am

I have to say I'm very omnivorous at this point in my life.  If I'm not doing anything else and it's within reach of my arm, I'll read it.  Problem is sometimes it's some really horrendous stuff, and I have to finish it.  I can't start something and not finish it.

Robert Johnston from Florida is reading Cataclysm Baby April 9, 2013 - 7:38am

Double post and can't find the button to delete one.  So I'll just write this here.

I wouldn't say Netflix created the Binge Watching phenomena so much as they are capitalizing on and playing into it. I've been binge watching TV shows (via netflix or DVD) or series books for nearly a decade now.

PS: That coffee you reference in the "foodie" section is actually very good, though rather expensive. Luckily I wasn't buying!

I love transgressive fiction, post-modernism and the beat generation, all of  the dangerous books if you will. Most of them americans writers of the weird. But my first lenguage is spanish so I feel compelled to read classics of magical realism and latin american boom...Still I wouldn't know  how to read a bad book, I lack the dedication. Maybe that's why I've become such a short story cannibal.

Although many of my favorite books are post 1950, I'm defintely a Gourmet reader. This is my second time reading Les Mis, and I think it's been at least four months...maybe longer. I eat slow too...maybe they're related.

I'm a cross between the omnivore and the secret snacker. The bookshelf in my living room is filled with classics and difficult reads. Most of them were acquired for the literature courses I took in college. Some I loved, some I hated, but they make me look sophisticated. Haha. All of my genre books are in my bedroom, or hiding in the trunk that I use as a coffee table. I do actually enjoy reading just about everything. Like my taste in movies, music, clothing, furniture, etc., I would describe my taste in books as ecclectic. Maybe I'm just an ecclectic person in general. Perhaps a little eccentric, but I teach English damn it. All English teachers are eccentric.

Christina Re from the United States is reading something a friend wrote April 9, 2013 - 11:02pm

I binge -- no doubts there. I pre-order books for the series I read, but if I don't get my hands on them on a Friday I have to wait until the weekend. Otherwise, I might not get enough sleep to make it through my workday. If I'm reading a series that's already released (like Game of Thrones) I won't read any other books until I've finished everything that's available for that series. I feel like binging is a habit I developed early on, I always checked out serial books from the library as a kid.

SammyB - I'm a bit the same - difficult books where everyone can see them, shameful pleasures (no NOT 50 Shades) tucked away in a corner along with the box of SugarPuffs.

I also still binge read, but for some reason mostly non-fiction. I've just ordered a gross of movie memoirs so may be hard to reach for a while. I blame Ed Sikov.

Because the telltale signs are spot on (even my profile says so), I'm a combination of binger and the compulsive.

I hope I'll never become a Foodie-reader, that one sounds ridiculous. Ha!