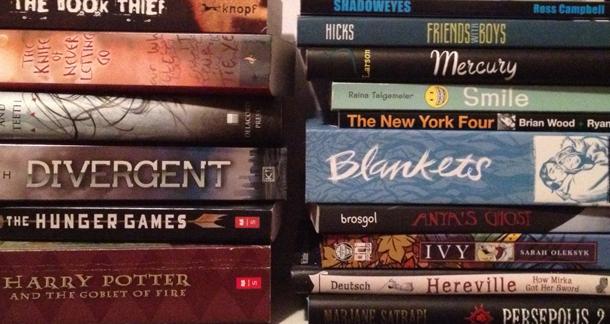 The first is a rapidly growing area of comics created by some of the most talented creators (and talented up and comers) in the industry. And their books are breaking new ground in the stories they’re telling – from Faith Erin Hicks' new offering Friends With Boys, which was available in its entirety for free on the web before it was in print, to Raina Telgemeier’s 2010 New York Times Bestseller Smile, which miraculously has to do with orthodontia and not hot vampires or werewolves.

However there’s also the entirely different animal that is YA (or all-ages) monthly comics. Which are, it’s sad to say, practically non-existent.  While there are certain publishers (like Boom! Studios) that make a real effort with all-ages titles, the truth is that the monthly comics market is achingly absent of good material for kids – DC and Marvel produce very few all-ages titles, and one of DC’s best and longest running offerings (Tiny Titans) was recently canceled. There are of course some stand-outs, like Jeremy Whitley's Princless from Action Lab and Scratch 9 from Ape Entertainment's KiZoic Imprint, but once you get a kid interested in comics, they're going to want more to read and the playing field is extremely thin.

The truth is that for whatever reason, kids comics, despite the stereotype that comics actually ARE and/or SHOULD BE for kids, barely exist, and that’s largely to do with the fact that they are consistently cited as being “loss leaders.”  And I’m sure this is true, but the trickle down effect of not making comics for kids is huge, because it means you’re not bringing in a good number of new readers; you're selling to the same crowd that gets smaller every year - because we're dying. Seriously, I know that sounds grim, but you can't sustain an audience that has no new young blood coming in.

One of the many things I learned from an experiment I did called The Ladies Comics Project, was that for most people who had never read a comic before, it’s a bit of a foreign experience. Sure, there are some people that discover them later in life and take to them like a duck to water, but for the majority, if they didn’t learn those specific reading skills (not to mention the idea of reading stories in little sections once a month) when they were younger, it’s hard to fully embrace as an adult.

Studies have shown that children learn languages most easily in the first ten years of life, and really – what are comics but another visual language?  Though I did not begin any kind of “official” relationship with comics until I was 15, there was a love affair with Archie comics when I was much younger that surely helped me understand (and build affection for) the medium. Getting readers while they’re young is absolutely key for building a long lasting and thriving fanbase, and while comics are not going to disappear anytime soon, the numbers don’t look good and haven’t for a while now, because there are so few new and young readers coming to monthly books, in part because there’s precious little material for them to read even if they do manage to show up.

Young Adult comics in graphic novel form, like their YA prose cousins, are truly one of the most fertile fields in comics right now. Whether that’s thanks to the explosion of Manga some years back, or the popularity of things like Scott Pilgrim and even the Twilight adaptation, I have no idea. All I know is that there is an embarrassment of riches when it comes to the talent out there producing comics appropriate for all ages – usually in Original Graphic Novel (OGN) form. And yet, while this is still a fast growing and fairly vibrant area for comics, it is outpaced to a ridiculous degree by its YA Prose cousins. There is simply no comparison. YA Fiction has been for quite some time now one of the bestselling markets for fiction. These days, if you want to make some money as a nobody that's never written a book before, you'd better be writing YA. That book everyone is talking about? It's a YA book (well unless it's 50 Shades of Grey apparently). That multi-million dollar movie franchise that's launching? That's based on a YA book series.

And there’s the rub. The distribution. Because the single biggest difference I can find between YA Novels and YA Comics (other than obvious medium differences) is simply access. Everyone knows where to go to find a book they're looking for, whether that be their local bookstore, or ordering online for print or digital. But with comics, especially monthlies, where can they be found? Monthlies are almost universally available only in comic book stores, and while I personally love comic book stores, even I can admit that they are not easily accessible the way mainstream book stores are. And they're not always as friendly to new readers (or young readers) as they should be. Comics, unlike almost any other product the world wants you to buy - books, movies, music - actually make you work for it. But in this age of everything being as easy as possible (because if it's not, people will just buy something else in it's place), that is no way to build a market. A big part of what makes these YA Comics released as OGN's so much more popular and easy to sell is that they are instantly available (as a complete story) from online retailers, and in good well-stocked bookstores, while monthly all-ages books flounder in comic book stores as the primary comics market (males 18 - 35) fiip right past them. As much as I don't want comic book stores to become a thing of the past, as it's a wonderful community and offers an expertise and service that would be greatly missed, it's impossible to ignore that the current Direct Market and Comic Book Store system is very flawed for building an audience. If YA prose was only sold in limited locations and not generally available online would it have ever exploded the way it has? I think not.

Digital, of course, has the ability to change all of this, but it’s a slow process and it’s only in the last year that digital has started to really gain some traction for comics. As companies begin to really harness the idea and embrace it (like the recent digital only comics Legends of The Dark Knight and Ame-Comi: Wonder Woman offered by DC at 99 cents a pop) and as the hardware to read comics digitally has become better and more affordable, digital is showing that it has the potential to be a game changer.  It's possible that developments like this will kill the direct market and comic book stores, which would be a loss in many ways, but if it comes down to choosing between losing comics or losing comic book stores, I'll take comics every time.

There are problems to solve - primarily distribution and access - but there's simply no reason that YA Comics can't become just as popular, just as money making as YA Prose. However, if you don't build it - and let them know you've built it - nobody is going to come.

I've read/reviewed many amazing YA novels over the last couple of years; and you're right, some of them really need the comic treatment.

For the time being I guess that comic publishers are happy with the money they are raking in selling the same comics to both the young adults and the real adults.

But then I'm jaded. Reading Sandman by age 12 and Jhonen Vasquez by 14 will do that to a kid.

YA Novels - especially some of the hot/dystopian stuff is just ripe for great comic and graphic novel adaptations. I hope comics will start figuring that out!