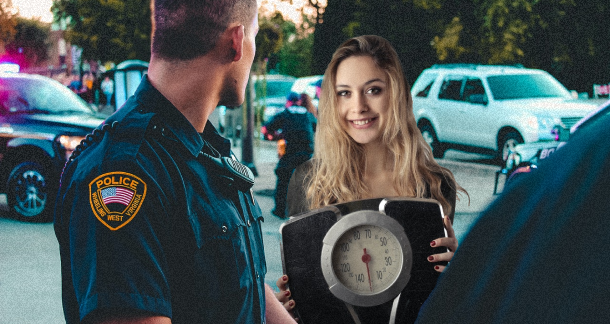 I pitched this before the protests, before the tragedy of George Floyd. I recently started using a health app called Noom. Even with the malaise of Covid-19 and the stress of trying to run a publishing company and write during the pandemic, I have lost weight. The app works, but I don’t know if the way the police do their job works. I know I should just talk about Noom and how writers could learn a lot from it, but I just got back from a protest and I can’t just talk about weight loss and writing. So I am going to talk about writing, Noom, and the problems with the police.

First, weight loss is hard and writing to get published is hard. In my experience it takes so much trial and error to succeed at these things. You try different genres and you try different diets. I was the Keto guy like three years ago and I guess now I am going to be the Noom guy. I’ve done Noom for a month and I’ve lost eight pounds. I like that it’s only eight pounds because it’s slow and steady and I’ve learned that slow and steady, whether it be writing or weight loss, is usually the way to make things stick.

At the rally I went to today, cops were giving out free pizza to the protestors...It made me think of something I learned in Noom...Eating a pizza can’t and won’t fix our problems, despite the momentary comfort it brings.

I see how doing Noom is pretty similar to how I approach writing. Time, routine, and consistency matter. I don’t write on certain days and that is okay, just like I sometimes fall off my diet for a day or two. As long as I get back to it the day after. What helps a lot with writing is I have fellow writers that I check in with to share my progress. Noom offers someone who checks in on you to see how things are going, along with a group of other people also trying to lose weight.

The writing habits I've developed over time have stuck. I don’t really fall off the wagon anymore. I just write without thinking much about it—it’s the publishing aspect that’s hard for me. I also wish weight loss could be easier for me, but the Noom app has definitely made a difference.

But what about the good cops?

Officer J. did the bare minimum in all areas. He would hang out while I worked on my novel and read. I wouldn’t say we were friends—more like work colleagues. He was a good guy and, ironically, his lack of motivation set him apart from the other cops, but I wouldn't say he was a good cop. I noticed cops like Officer J. didn’t want to troll the block, which a lot of the other cops loved to do. He didn’t want to make waves, and made sure to stay cool with the other cops. He wouldn’t even help me get back the damn porno tapes that my boss was going to make me pay for.

The ‘good cops’ like J. just wanted their pay and pension and to not get involved with the messy and problematic politics of the job. The cops that actually liked being cops were the ones who always started shit, who really relished the militarized aspects of the job. Cops who let a toxic culture and historical systemic racism force (or maybe allow) them to be less a part of the community (even those of the same race) and more a authoritarian force.

At the rally I went to today, cops were giving out free pizza to the protestors. It appeared to be a nice act, a way to bring goodwill, but it made me think of something I learned in Noom: we turn to food like pizza to assuage the bad feelings we have and erase the guilt and anxiety we feel. Eating a pizza can’t and won’t fix our problems, despite the momentary comfort it brings.

I am not saying I have the answers about how to reform the police, but a fucking pizza isn’t going to bring back all the innocent black lives that have been lost. I wish there was an app to help, like with dieting or writing, but it’s going to take moving mountains for the police to demilitarize, and it will involve change on a local, state, and federal level to reform an institution many people feel does more harm than good. On the scales of justice, there is too much dead weight to feel good about how the police do their job.

Yeah your point is quite clear and one can really apply these points.It looked me quite relevant to typhoid vaccine nyc paper so I was looking for the main source of this post and here I found it.Good job done.Thank you so much for this post.