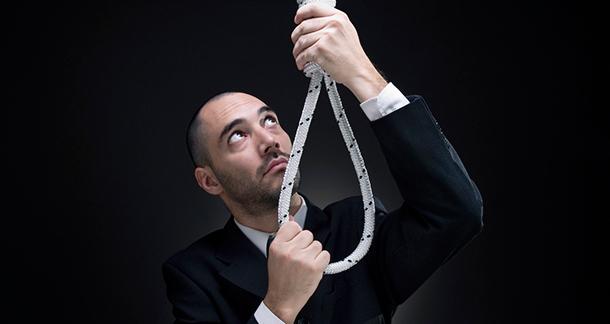 "I just want to make sure that nobody did the suicide to him." — Detective James "Jimmy" McNulty, HBO's The Wire

The victim hangs from an extension cord tied around his neck in a crude slipknot. An overturned office chair lies on the floor beneath him and a hand-written apology to his wife is laid out on his desk. The investigators have already written it off as a cut-and-dried suicide, but your detective protagonist has a sneaking suspicion that something more sinister is afoot. How did a five-foot tall man get the makeshift noose secured on a pipe fifteen feet above him without a ladder? And why would an accomplished yachtsman tie such a sloppy knot? And where did the dark bruises on his forearms come from?

While the trope of a murder scene being staged to seem like a suicide is certainly not a fresh idea in crime fiction, it can make for an interesting twist if done properly. The 2007 film Michael Clayton has a chilling version. The flipside of this concept — a suicide where the victim stages the scene to frame someone for their own murder — is less common but also engaging when written well. This article is a guide to help you focus your research on distinguishing a homicide from a suicide and suggest some possible twists for a staged crime scene.

Firearms are the most common method for committing suicide in the United States, particularly among male victims. The days of shooting someone in the head and simply placing the gun in their hand afterward might have worked in the 1940s, but today's forensic investigations make that subterfuge a lot more difficult to get away with. Gunpowder residue on the victim is a reliable forensic indicator that the victim pulled the trigger. Blood may also be found on their firing hand due to backspatter from the entry wound. The majority of self-inflicted gunshot wounds involve contact of the barrel to the skin or clothing, leaving the tell-tale signs of burns from the muzzle flare on skin and fabric. There are also numerous cases where suicide victims fired more than one shot due to contractions of the hand muscles or a faulty firearm, making it seem like a murder at first glance. My previous article on gunshot wounds has some great links to forensic resources involving firearms that will help you craft your 'fake suicide' scene.

A person may be murdered by strangulation and then suspended from a rope to make it look like a suicide. If this is the case, the forensic investigator should be able to tell by the ligature marks on the victim's neck and the nature of the internal tissue damage. In the case of a true suicide, traces of fibres can often be found on the victim's hands from when they tied the knot and hung the rope. Facial congestion and petechial hemorrhages will likely not be found in a suicidal hanging, but are commonplace in a ligature strangulation by another person. The idea that the person was rendered unconscious through drugs or alcohol before being forcibly hanged can be ruled out through a toxicological analysis. The investigators are also not limited to using the corpse to determine cause of death. In some cases, a forensic knot specialist might be brought in to determine if the knot was self-tied. This website has a great breakdown of all the forensics involved in a case of suicide by hanging and a forensic analysis of injury and death by asphyxiation can be found here. Just a little light reading before bed...

Suicide by stabbing is very uncommon and should be immediately suspect for an investigating character. A common forensic indicator of a true suicide where a knife is used are hesitation wounds. It takes a great deal of willpower to stab oneself with enough force to cause death. Often, victims will try and build up the resolve to sink the knife in by starting with superficial cuts in the same area. If a person has attempted this before, there may be scars from previous hesitation wounds. The angle of the incision will also play a large role in the determination of the cause of death. Was the victim left-handed or right-handed? Does the wound match the dominant hand and angle of possible entry given the victim's proportions and positioning? Clothing can also be a indicator in this determination. Stabbing through the clothes in a suicide is uncommon, but common in a homicide unless the victim was undressed when they were assaulted.

If you're writing a novel where a staged crime scene is the focal point and your main character is a forensic investigator, you might want to drop some cash on a specific textbook on the subject. However, most authors can construct a decent 'staged crime scene' using information pulled from general forensic guides for writers. I've only touched on a few methods of suicide here given the space constraints, but there are a million ways to kill your characters. Exsanguination, carbon monoxide inhalation, poison, suffocation, jumping from a height, electric shock, drowning, subway cars. Get creative with it and get the details right.