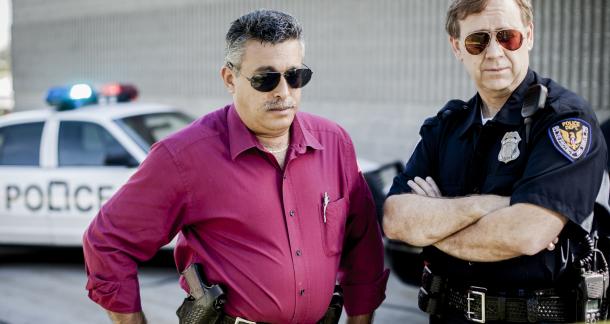 Your cop protagonist shouts into the radio strapped to his tactical vest while he races toward a liquor store robbery. The veteran detective you’ve created confesses something to her partner on an overnight stake-out outside the killer’s apartment. Whatever crime fiction you’re crafting, it’s important that you maintain your authority by nailing the dialogue when writing characters who are in law enforcement. As a criminal lawyer, I spend a lot of time chatting with the police. Officers regularly complain about how they are generally portrayed in television, films and novels. When I canvassed them about what crime writers get wrong most often, the answer was almost unanimous — dialogue. Too often police characters drone on like robots, use ridiculous slang or talk like stereotypes of what we think cops are supposed to sound like.

What your police characters say and how they say it will determine how believable these people are to your readers. Unless you’ve worked as a police officer or spent time around law enforcement, knowing how to craft authentic conversations between these characters can be a challenging task. Researching police lingo can also be an annoying and time-consuming chore. This article will provide some helpful advice on writing better police dialogue for your manuscript.

Want to know what a beat cop might say into his radio when talking to his dispatcher? Curious about the codes and lingo the dispatcher uses when getting called out to a crime scene? Try listening to actual police radio frequencies. Websites like Brodcastify allow you to stream police, fire and paramedic channels based on geographical location. Sometimes these transmissions go offline to protect officers in dangerous situations or to avoid tipping off criminals during manhunts, but for the most part these stations are readily available to anyone with a  laptop. You can also search internet radio for police-related podcasts where you can hear actual officers from different places talking about real cases. These resources are a gold mine for authentic dialogue and local vocabulary. Figure out where your story is set and tune into law enforcement transmissions or podcasts in that area.

Be conscious of rehashing tired tropes when writing your dialogue. We’ve all read about the alcoholic detective who struggles with inner demons, the senior cop who’s a week away from retirement and the bitter veteran who resents being saddled with an idealistic young rookie. “I know the divorce rates are higher in policing than in most jobs but the ‘cop in a custody battle’ storyline is very cliche,” said one officer I spoke with. “We don't all sit around and chat about our ex wanting more money all the time.” Try to take a new spin on these old chestnuts and have them say something meaningful and fresh when speaking with one another.

Always remember that cops are real people, not cardboard cut-outs. “In terms of writing, I find that most cops in books are either very rigid and robotic, or complete loose cannons,” said one officer. There’s a great scene in the first episode of television show True Detective where Woody Harrelson’s character Detective Martin Hart lists off the types of cops he’s worked with — the bully, the charmer, the surrogate dad, the man possessed by ungovernable rage, the brain. The police precinct is no different than any other workplace. All types of personalities are employed there. Don’t get caught in the trap of making all your law enforcement characters walking-talking clichés who are either type-A androids or sombre tortured souls. Look at your own workplace and the tension and drama that unfolds when people talk candidly about their personal lives around the water cooler. It may seem strange, but policemen and women don’t spend their entire shifts talking about guns and being cops. They’re human beings just like the rest of us. “Half the time we are arguing about where to eat,” he continued with a laugh. “Real police dialogue is more normal.”

The Lingo and the Slang

Law enforcement officers use a lot of employment-related jargon that is almost solely dependent upon where they are working and often unintelligible to the outside listener. Every jurisdiction has its particular lingo that you should try to familiarize yourself with. A perp in one community might be a suspect in another, or a subject of complaint in another. This is a harder topic to research because there are so many different jurisdictions and a lot of outdated and downright wrong information on the internet. As I suggested in my previous article about legal terminology, the best solution is always to go straight to the source. Everyone knows someone who knows a police officer. Ask around to friends and relatives who might know someone that works in law enforcement. Not setting the novel in your neighbourhood? Don’t stress. Local officers might have a law enforcement contact who's working in Florida or Germany or wherever your story is set. You can also try searching police message boards online to find contacts in different areas to message. Don’t be afraid to reach out with a polite and clear email that explains what information you're looking for and what you're writing. The worst an officer can do is ignore your message or say ‘no thanks’.

When I enquired about what was often missing in the portrayal of police in crime fiction, two things came to the front: trust building and proper interrogation techniques. Policemen need good information to do their jobs well. They often turn to people they don’t know in order to get it. These informants or witnesses may not be sympathetic to the police presence in their area. In order to elicit information from these citizens, police need to quickly build a rapport and gain their trust. Your characters should do the same.

This also holds true for the interrogation room. “I can assure you that shouting at the suspect in a menacing stance isn't a technique that's used,” said an officer. “The vast majority of interviews are based on known facts, and by that I mean asking questions we generally already know the answers to without showing them our cards. All this happens after we’ve done a great deal of rapport building.” Cut the tired ‘good cop, bad cop’ routine from your manuscript and write something more realistic.

Who Does it Well Already?

Published authors who set their crime novels in a particular jurisdiction and have established a solid police procedural series are great research for lingo and slang. When a writer gives shout-outs to actual law enforcement officers in the ‘acknowledgments’ section of their novel, it is usually a good sign that they’ve taken the time to get it right. In terms of films and television shows, most of the officers I spoke with agreed that the The Wire and the film End of Watch are also great examples of authentic police dialogue. Check them out and get writing!

I worked very briefly in a lawyer's office where I got to catalog evidence including police transcripts. They don't speak like anyone I've seen on TV (Law and Order interviews are the worst)

Thanks for the article - lots of good advice.

I know one fellow who was walking past a crime scene when one of the cops yelled "Freeze!" at him. All the other officers laughed at the cop who had said it. Nobody says that outside of television and movies.

Law & Order interviews are my favourite. The suspect blurts out the beginning of a confession. His lawyer tells him once to stop talking, then sits quietly as the client spills the beans on their entire involvement in the crime.  I love it...