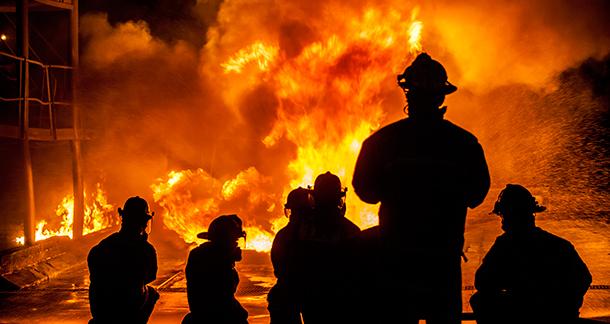 Imagine your detective racing to stop a pyromaniac from terrorizing the city with a series of deadly infernos during a heatwave. Or a fire investigator struggling to prove an 'accidental' condominium fire was actually torched to cover-up a triple homicide. Pyromania is one of the three behavioural characteristics in the McDonald Triad for sociopaths and serial killers. Yet arson remains an underrated and underused method of murder in crime novels. Bad guys commonly shoot, stab and strangle their way through manuscripts, but fire can be a spectacular alternative for writers when it comes to killing characters.

Even if arson isn’t the main criminal activity in your manuscript, consider adding smaller fires to your book to liven up its sagging middle. James Oswald’s Book of Souls is the second novel in his acclaimed Inspector McLean series. McLean’s attempts to solve the main case are complicated by a subplot involving an arsonist burning their way across the city. In the novel, the beleaguered inspector gets a helping hand from a fire investigator character who provides the much-needed forensic background to solve the case. The pyromaniac angle adds an interesting twist on an otherwise straight-forward serial killer novel.

Bad guys commonly shoot, stab and strangle their way through manuscripts, but fire can be a spectacular alternative for writers when it comes to killing characters.

Arson is generally defined as the deliberate setting of fires with the intent to damage property. It can be as complicated as a computerized timebomb or as simple as some paper and a book of matches. Legal definitions, requirements of proof at trial, and potential penalties for arson vary widely across North America. What might land you in jail for twenty years in one state may get you the death penalty in another. Make sure you research the area you’ll be setting your manuscript in before any of your characters start chatting about these aspects of the crime. You can also search newspaper archives for real cases where truth is often weirder and more interesting than fiction.

In my legal career, I’ve seen lots of different motives in my own arson cases and those of my colleagues — insurance fraud, destroying evidence of other crimes, revenge, blind rage, mental disorders such as pyromania, or in rarer cases, deliberate murder. Sometimes people are careless, reckless or intoxicated when they accidentally start a small fire, but it ends up causing major damage or unintentional death. There are tons of opportunities for plot ideas and character motivation. Get creative.

A forensic fire investigator has a dirty job. Arson sites are often totally destroyed by fire and the building had been blasted with thousands of gallons of water in an effort to save it. Investigators are usually brought in at the earliest opportunity, sometimes while the fire is still burning. Observing the fire in action can provide essential clues to help them in their work. The investigator's job is to figure out two things: where did the fire start and how? They use a wide variety of skills and tools to do their job, including air analysis devices and even accelerant-sniffing canines.

I recommend purchasing a writer-friendly book like Howdunit Forensics for basic details on arson investigation techniques. Most information on arson cases can be found on the internet, but if you’re considering a main character who is a fire investigator or a full novel about an arson case, you may want to invest in a more specific textbook so you can clearly establish and maintain your technical authority on the subject. For fiction references, The Fire novels from Suzanne Chazin (The Fourth Angel, Flashover and Fireplay), Death du Jour by Kathy Reichs and Blue Smoke by Nora Roberts are all great examples of forensic specialists trying to solve arson cases. Point of Origin: Playing with Fire is a novel written by an actual arsonist that provides insight into the motivations of a serial firestarter.

Thinking of having a cool twist ending where the arsonist turns out to be a fire-fighter? Sorry, not exactly an original idea. Each year in the United States, roughly 100 fire fighters are convicted of arson. The profession often attracts people with an abnormal interest in fire, and fire-fighting organizations struggle to find ways to screen them out. Plus, the 1991 film Backdraft, starring Robert Deniro as an expert arson investigator, already beat you to it.

Do you know the difference between first, second and third degree burns? Most people don’t, unless they've been burned themselves or work in the medical field. If a character is severely burned during a scene in your manuscript, how do you accurately capture the agonizing pain, the smell of burning skin, and the look of scorched flesh? The answer is simple — research. The internet has a huge database of medical knowledge and case-by-case descriptions of burn victims from every possible type of fire. A good medical site can offer a starting point from which to jumpstart your research. And a writer only has to Google ‘burn survivor’ to find dozens of first-hand accounts of what it feels like to be seriously burned. As always, don’t dive into the endless rabbit hole of the internet. Set a strict time limit for your research and then get writing!

Writing the crime scenes is pretty sensitive part of the whole process of creating content. As a law student, I know how difficult is to find the words that reader will precept literally and get the point. I am currently writing a paper about the Arson and dead penalties and I really find here website useful for the students who need help with their writings.