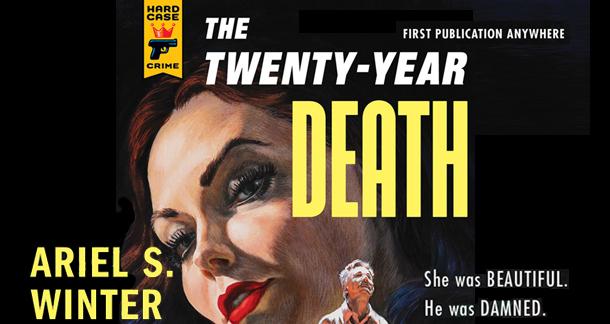 My novel, The Twenty-Year Death, is the story of a “great American novelist” named Shem Rosenkrantz as he goes from literary darling and popular success to used-up hack who can’t get work. His story, which unfolds over twenty years, is told through three complete novels, each in the style of a different mystery master: Georges Simenon, Raymond Chandler, and Jim Thompson.

The format came about when another book I was writing fell apart. In that book, I planned to write novellas based on lots of different genres, and the first one I wrote was in the style of Georges Simenon simply because I was reading a lot of Simenon at the time. When that book fell apart, I was struck with the idea: what would a mystery series look like if a character other than the detective appeared from book to book? I liked the idea of continuing with other homages, and I chose Chandler and Thompson as the other novelists because I was a fan of each, and because they are the exemplar in crime fiction from their respective decades. I wanted each of the individual novels that make up the book to read as though it was actually written by its literary forbear, for the reader to feel as though he was reading a “lost” book by one of these masters. Not to say that I thought I could achieve the same mastery as Simenon, Chandler, and Thompson, but that my goal was to get as close as possible. LitReactor has asked me to answer the question: how did I do it?

What would a mystery series look like if a character other than the detective appeared from book to book?

The first, and probably most obvious step was to read a lot of books by the author I was going to emulate. I read eleven Georges Simenon books, an even mix of the popular novels and the hard novels, and one book of nonfiction while I was writing the initial drafts of Malniveau Prison, book one in The Twenty-Year Death. I re-read the first five Raymond Chandler novels, read for the first time The Notebooks of Raymond Chandler, and half of the Everyman Library’s Collected Stories while working on The Falling Star, book two in The Twenty-Year Death. And I read or re-read seven novels by Jim Thompson, along with the Robert Polito biography Savage Art: A Biography of Jim Thompson, when writing Police at the Funeral, book three in The Twenty-Year Death.

I carried these books with me when I went to the library to write. I would pick a page at random and read a few sentences, a paragraph, never more than a page, just to prime the pump, to hear the voice in my head, its rhythm and attitude. Then I would begin to write, and as I wrote, I made sure what I was writing still sounded in my head like the source material. Sometimes I would refer back to one of the books again in a writing session to keep the voice present in my head, but just as often, I didn’t. Simply carrying the books with me, having them where I could see them beside my computer kept me connected to the author in question.

In addition to the overall tone of the writer, I tried to employ some of his little idiosyncrasies. Things that weren’t flashy, things that were in some cases simply there because of the time in which the book was written. For example, Raymond Chandler makes a point of calling unmanned elevators “automatic elevators.” A modern writer wouldn’t make that distinction, because we only have automatic elevators now. Chandler also spells okay as “okey,” a now archaic spelling that jumps out at you when you read Chandler, so I put it in. Thompson’s characters use phrases like “five-ten minutes” when someone is talking about a non-specific number, so I put that in. Or even punctuation, like Simenon’s use of ellipses in dialog, which he employs almost as much as the period.

But to truly capture the feel of these writers’ books, I had to not only capture the sound of their language, but the way in which they told a story. Most writers’ plots move in similar ways from book to book. In Simenon’s mysteries, Chief Inspector Maigret collects data and employs his police force, but what he does more than anything is force the necessary information out into the open through ruses, contrived situations, and knowing silences. The perpetrator indicts himself because Maigret has forced him to. Even in the hard novels, Simenon’s characters are always poking and prodding at each other, waiting to see what will tip the balance, what will get a rise out of someone. And so Simenon’s plots are very controlled, which was something I tried to build into Malniveau Prison.

Chandler’s books are messy because Marlowe has no clue what he’s doing. People come to him because they think he knows more than he does simply because he’s asking the right questions. And so each question touches off someone else, who then attacks Marlowe or appeals to him. In Chandler’s world all crimes are conspiracies, something that requires multiple people to either commit or to hide, which is very different than Simenon’s lone actor, and one reason why the two writers’ books are so different. I took care to make sure that my private detective was jerked around by everyone he met, and that he did his best to protect the people his own sense of honor demanded.

As for Jim Thompson, his novels are controlled by his first-person narrators, who are so crazy that the novels can only move from barely contained violence to horror after horror until they often end with the impossible conceit that the narrator is narrating his own death. The most important aspect of these narrators is that they almost always say again and again that it’s not their fault, none of it is their fault, their crimes were perfectly justifiable because they had no choice, the victims made them do it. So, when I reached book three, I took my main character, Shem Rosenkrantz, who had appeared tangentially in the first two books, and made him my narrator. Then I let him destroy everything he cared about and then everything he needed to destroy to cover up his initial destruction. It was by looking at the shape of each of the authors’ novels that I truly captured their writing.

But the last step was making the books my own. The first thing I did to ensure that was to not refer to the sources during rewrites. Each subsequent draft I referred back to the original books less and less, until in the final drafts I purposely did not look at the masters’ books at all. At that point, the voice that I was trying to maintain I got into my head by reading a few sentences or paragraphs of my own writing, so the book would sound like me doing Simenon, or me doing Chandler, or me doing Thompson instead of actually Simenon, Chandler, or Thompson. In the end, while each book stands completely on its own, it’s clear that the three books together come from one writer and make up one whole novel.

There’s one last postscript I need to add here, and that’s a note on Chandlerisms. The first thing most writers do when they want to channel Chandler is to try to come up with those wonderful off-the-wall metaphors, like “It was a blonde. A blonde to make a bishop kick a hole in a stained glass window.” I chose to include no Chandlerisms at all. At base, that decision came from the knowledge that I couldn’t write one single Chandlerism that would be worthy of Chandler’s reject file. (Yes, he kept lists of Chandlerisms himself to be employed at a later time.) And so, Chandlerisms would only highlight how not like Chandler my book was. But it also goes back to making the book my own. I shy away from metaphors usually. So a book that relied on metaphors to define its tone just wasn’t my book, which was still what was important to me. That The Twenty-Year Death is my book.

Jeff from Florida is reading Another Side of Bob Dylan by Victor Maymudes August 7, 2012 - 3:01pm

So while Shem Rosenkrantz, the novelist, sticks around for all three books, does the detective need to be changed out? Or have you kept the same detective on board, while showing his methodology shift over the twenty years to reflect the different authors' styles?

Good article, Ariel. The more I read about The Twenty-Year Death, the more interested in it I become. Litreactor certainly picked a worthwhile prize for this month's Flash Fiction Smackdown (not that those at the site don't have a knack for that).

Like Jeff, I'm curious about how the structure relates to the overall story of the fictional author. It is my understanding that the main character changes from a French inspector to an American detective to the author. I assume that you have avoided addressing how the individual stories tie into one another because doing so would give away some aspect of the plot, and if that is so, please ignore my curiosity and go on your merry way.

R.Moon from The City of Champions is reading The Last Thing He Wanted by Joan Didion; Story Structure Architect by Victoria Lynn Schimdt PH.D; Creating Characters by the editors of Writer's Digest August 7, 2012 - 4:12pm

I'm on it!  It'll be read, then added to my two foot stack of Hardcase Crime books. Thanks for the news, Ariel.