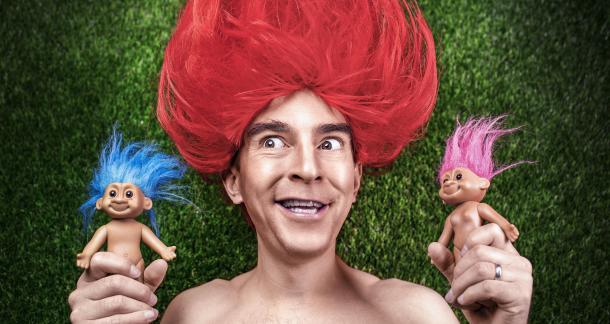 Writing a novel is hard work. Anybody who tries to tell you differently is after your money. But don’t get me wrong, I’m also after your money, but at least I’m upfront about it.

Writing a novel is not a quick process. It is very tedious, lonely work. You spend most of the time by yourself, with only your thoughts to keep you company. So, it makes sense to assume that collaborating on a novel with someone else would make the writing process much easier and less stressful.

Well, you know what they say about people who assume, right?

They’re often ill-informed and, in retrospect, appear to have exhibited foolish thinking skills.

I recently worked on a novel with the infamous porn-star, Vincenzo Bilof, and I gotta say, I certainly learned a lot. I had attempted collaborations with other authors in the past, and nothing ever really came from any of them. So what Vincenzo and I accomplished was certainly no easy feat.

It seems silly to say this, but if one of the authors doesn’t really give a shit about the book, then the odds of it getting finished are pretty slim.

For a novel like this to happen, both collaborators must be fully dedicated to the project. It seems silly to say this, but if one of the authors doesn’t really give a shit about the book, then the odds of it getting finished are pretty slim. The writing styles of each author also shouldn’t be too different from each other. It helped tremendously that both Vincenzo and I tend to add dark humor to our writing, and that we’re both in love with “the weird.”

You read enough interviews and you realize that the majority of the time, with collaborations, one of the authors will first come up with the initial idea, and bring it to someone else. The same rings true here: Vincenzo had started on a book--a dinosaur book!-- and got about ten thousand or so words into it, then hit a wall. Instead of abandoning the idea, he brought it to me, and we brainstormed for a while, then I took over for a while, until I also hit a wall, then I sent it back to him, and so on. I’d go over everything he had written and add my own seasoning, and he would do the same for the sections I’d written.

Collaborating on a novel is a wonderful way of finishing a book that would never get finished when working solo. Every book is unique and they each must be handled their own way. Sometimes it isn’t immediately obvious whether or not you need a collaborator. You have to stop and think about what your goals are with each book. Could another author bring more to the table? Could this book benefit from another set of eyes?

When handling ideas and genres out of your normal territory, it could definitely help to tag-team. But don’t force a collaboration if it doesn’t feel right. Look at it this way: The Hardy Boyz were always much more interesting when they were in the middle of a feud. They just weren’t meant to be together. But now consider the Dudley Boyz. Can you even imagine them not wrestling together? You need two to successfully smash a motherfucker through a table, right? Also, why does professional wrestling insist on replacing S with Z? This kind of recklezz lifestyle is madnezz.

And now that I’ve lost half of my audience by talking about wrestling, let’s take a look at the collaboration processes of a few other (more successful) authors...

'Floating Boy and the Girl Who Couldn't Fly'

In this interview on My Bookish Ways, Paul Tremblay covers how each collaborator improves the other:

I had very roughly sketched out the first chapter with a boy climbing up a tree and floating away at a birthday party and pitched it to Stephen. He was game and we took our time passing chapters and sections back and forth for a few years until we arrived at the end. [...] I think our styles are similar, or at least similar enough that splicing the styles together wasn’t a problem. I can’t fully explain the similarity beyond we like us some first-person-present-tense, and I think we’re broth drawn to the interior life of that kind of narrator/character. We complemented each other well, I think. Stephen would fix my crappy syntax and I chipped in by cutting out most of his ‘yeah’s.

In this Locus interview, Pratchett and Gaiman go back-to-back on the importance of covering the other's tracks:

Terry Pratchett: “The thing kind of jerked forward quite quickly, as both of us raced one another to the next good bit, so we would have an excuse to do it. Both of us cornered certain plot themes which we stuck to like glue.”

Terry Pratchett: "Insofar as there's any pattern at all, we worked out what the themes were and then we each took a theme and wove that particular strand."

Neil Gaiman: "The other pattern, of course, was that you'd do your writing in the morning and I'd do mine late at night."

Terry Pratchett: "Which means there was always someone, somewhere, physically writing Good Omens."

In this FAQ, Peter Straub pretty much tells you all you need to know about how to successfully collaborate:

Soon after we had become friends, King came over to my house for dinner. Late at night and after many beers, he said that we might have a lot of fun if we wrote a book together. I agreed — it did sound like fun. Besides that, collaboration was an interesting way to alleviate the loneliness inevitable in writing. The first thing we did was to work out when we could begin — it sounds absurd, but we found that existing contracts for books meant that neither one of us would be free for another four years. So we made a kind of provisional date to begin thinking seriously about it four years later. When the time came, Steve and I spent a lot of time talking about what sort of book we'd do. (Most of the crucial stuff was decided during a series of hapless journeys back and forth from his country house to Portland, I think about 30-40 miles away, in the course of which we kept forgetting something or other, thus making it necessary to do the whole trip all over again. This happened three times, maybe even four, so we had a lot of time to talk).

Soon after that, he came to my house in Westport and we began writing the book together at my computer, purchased especially, as was his, for this project. We ripped and roared through something like 50 pages, I think, and Steve drove back to Maine while I wrote an outline for what was to come. This turned out to be 75 single-spaced pages long, and we kept to it for about four months. He wrote pages, not to any preset plan but simply until he felt like stopping, then sent them to me via modem — lots of jiggery-pokery & adjustments here, because he had a Wang and I had an IBM, both of them dumb clunky old-style hideously expensive word processors — at which point I picked up the thread and wrote until I felt ready to hand it off to him.

Things went on as before, pages whipping through the ether between Maine and Connecticut, until we were within about 100 pages of the end, about which we knew virtually nothing. I went to his place, and we spent about 8-10 hours writing the ending on his computer. He sat down, banged away, stood up, I sat down and banged away, more slowly. When he wrote, his record, by Eddy Grant, played; when I sat down, mine, by Zoot Sims and Phil Woods, did. I have to say that this was an extraordinary period. It was a rich, rich experience, beautiful in a way, and I came away, when it was over, with even more respect for King than I'd had before. A while later, when we'd cooled down, we got together again in Maine with the editor & wrangled about what to take out & what to change. All this ended amicably, and we were both pleased with the book. I even got to sort of like Eddy Grant — bop down to Electric Avenue, I guess that's what we did.

Have any thoughts on the collaboration process?