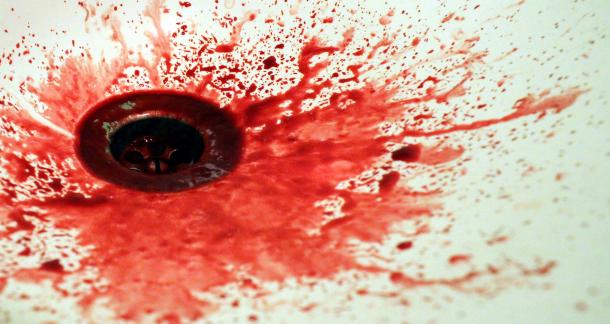 Wait, that’s not right...the definition we’re all looking for is...EIGHT definitions down?! Does anyone cool work at Webster’s? Can they hire like one cool person?

We’ll just use our own definition: Gore is the gross stuff, the stabbing, the shredding, the exploding heads and pierced eyeballs, the blood and guts and then more blood that usually make for peak disgust in a horror story.

Like sex, explosions, and hilarious jokes about dictionary definitions, gore adds a lot to a story, but only if it’s done right, done in the right context, and avoids some of the normal mishaps.

Sharpen your knives, or maybe dull them, whatever floats your boat, and let’s carve into some how-to's for writing gore.

The Honesty of Gore

When a horror movie has a disgusting visual, it usually works one of two ways: They tastefully cut away, or they show the whole thing in bloody detail.

Here’s what I want to say about that choice: If you can’t stomach writing it, then maybe it shouldn’t happen at all in your story. If you’re going to deal with a decapitation, then show us a head in a Wendy’s bag, covered in maggots, Baconator and human brains mixed together in a roadside stew.

I know, what some of you write renders that advice inappropriate. I’m not advocating that every bloody detail has to make it into your finished story. I just want you to write the gore in a draft, go all in, then edit down. Even if you only give us a glimpse of some carnage, a single line, that glimpse will be more powerful and affecting if it’s the best line picked from 20.

Here’s an exercise I want you to try:

Don’t say that when the guy stabbed the monster, it was like slashing through a rhino’s hide. How many people do you know who’ve gone at a rhino with a knife? Who knows what that feels like?

Yes, intellectually, you understand that the author is explaining the creature has tough skin. Gore isn’t supposed to be intellectual, it’s supposed to elicit an immediate reaction. Using a simile like rhino hide puts the information in your brain, and it stays safely in your brain. Doing it another way puts the information in your body, and it ping-pongs back and forth between the body and the brain.

Nobody’s stabbed a rhino, everybody has sliced open a watermelon.

By the way, the test for whether or not you did it right: A reader thinks of your book the next time they cut open a watermelon.

Here’s an exercise for this:

One of the weaknesses of writing is that we too often think about it cinematically. Movies use visuals and sounds and that’s it. A character can smell something disgusting, but they have to wrinkle their nose and explicitly tell us, which doesn’t remotely compare to the overpowering stink of walking in an actual sewer or the stench of a rotting corpse. Or a corpse rotting in a sewer.

That means that if you go with something else in your written gore, you can scratch an itch that movies can’t. You can make a smell the bigger part. You can use taste. You can talk about the physical sensations as they happen, whether the gore is being done to a character or by a character.

Bring taste, smell, and touch to your gore and you’ll connect with readers on an immediate, body level. Bring in things that are hard to show on film, like textures, viscosity of fluids, stuff like that.

If the hero tastes blood as a chainsaw grinds through someone, “He tasted blood” isn’t good enough. We all know what blood tastes like, so why not take it further? Tell me there was a warm, cough syrup flavor to it, maybe something chemical because the taste mixed with the oil on the chain or the saw’s exhaust.

Whatever phrases you're using, unpack them, then repack them so they're tight and avoid repetition.

Try this exercise to unpack and then repack your gore: 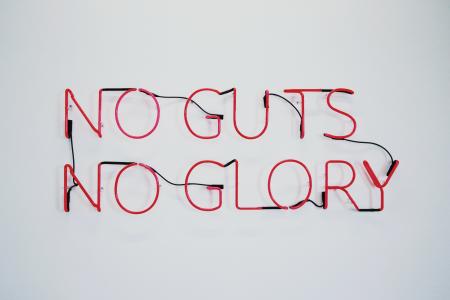 A recent study of gore came through with some findings that’ll help you out.

One, people have vivid memories of gory scenes, but very poor memory of what happens in the moments preceding the gore. Make sure you don’t put an important plot point moments before your gore. But, if you want to sort of include a clue or piece of a plot puzzle, this is a great place to hide it in plain sight.

Two, vomit and feces didn’t affect viewers as strongly as killings and brutal, bloody depictions, unless the person depicted did something disgusting with the vomit and feces.

Three, what they called “sociomoral disgust,” things like racism and child abuse, didn’t bring up a gore response, and viewers tried to think through the scenes rather than just straight-up reacting. These things bother people, but in the brain, not the body.

Last, for whatever reason, people who witnessed gory scenes emerged feeling optimistic that good would win out in the end. Why? I have no fucking idea, but I guess gorehounds are optimists at heart. Who knew?

How Writing Gore Can Save Your Life

Next time you’re experiencing some discomfort at the dentist, go into your writer brain. Catalog what you feel, what you taste, what you hear. Catalog that burned popcorn, metal, tooth smoke smell from the drill. Record the taste. As soon as you leave the office, write down what it feels like for tiny bits of tooth to hit the sides and roof of your mouth, how the sound is different with the drill in your mouth, how you could feel the vibration in your sinuses, inside the front of your skull. Pay special attention to the sensations that you couldn’t see or hear.

If you’re confronted with gore, and if you have a lens to put between you and it, then you might actually be able to put aside your personal revulsion and get through it a little easier.

Get Grande Illusions: Books I & II by Tom Savini at Bookshop or Amazon

Get My Favorite Horror Movie: 48 Essays By Horror Creators On The Film That Shaped Them at Bookshop or Amazon