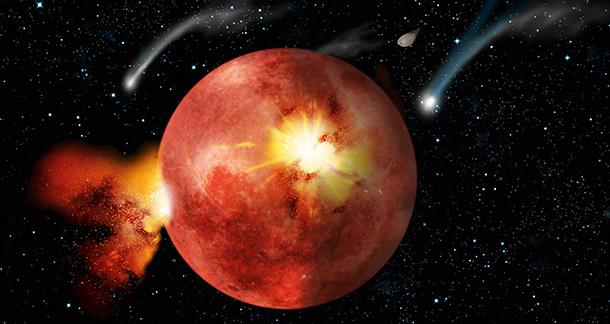 “Hell is empty and all the devils are here.” Shakespeare’s oft and overused quote has never seemed more applicable than in 2017, a year that has seen a deluge in tidings of geopolitical tension, racial division, mass shootings, natural disasters, and sexual harassment. The weight of the news flows at an alarming pace and has been an assault on the nerves, leaving the senses raw. But beyond the macroscale, it’s also the day-to-day grind of paying bills, finding work, getting (and keeping) healthcare, providing food, shelter and comfort that serves up a daily megrim of concerns shared, no doubt, by many.

My personal microcosm, at 47, feels like what is called in astronomy, the “Late Heavy Bombardment” era, when the terrestrial planets held their own as asteroids made final altercations to the topography. Bit over the top? Yeah, agreed, but I’ve read a lot of Martin Amis of late and he sure enjoys his dwarf stars, quasars, and dark matter, as do I, so it’s not a stretch for such inspiration. This year I’ve anguished over writing and publishing, fluctuations in sales leading to an overall downturn in the business, and as I write this, my bottom line has dipped to $700, just in time for the Christmas season. A Grinch in my inner ear reminds me that five years ago I walked away from a good-paying job with plush benefits to go fulltime freelance. Well, I can tell that bah-humbug conscience, here and now, I didn’t regret it then and I still don’t.

Five years ago I walked away from a good-paying job with plush benefits to go fulltime freelance...I didn’t regret it then and I still don’t.

Even so, there comes a time when one must somehow flee the torrent of harsh realities before it morphs into the Holly Golightly mean reds. Picking up a book for pure enjoyment had once been a way for me to combat those moments. But reading as part of the job, whether it’s manuscripts, for research, or for writing book reviews, begins to exhaust the original pleasure. It’s become more difficult to pick up a crime story or a mystery slider in the evening after eight to ten hours of the same. Literary icons aside, like Amis, who I read often for motivation, I turn to other activities to de-stress from the world-wearing woes—recreational math problems and sudokus, usually with some jazz playing in the background, the sounds of Thelonious Monk, Trane, or Chet Baker. But getting the family involved always makes for the best diversions, and board games like Scrabble, Life, or my personal favorite—Backgammon—top the list. A new favorite of my daughter Ava is the Disney version of the card game Apples to Apples, which has gotten laughs rolling from everyone. And nothing beats an evening walk with the little one, or sometimes a cardio-friendly game of tag, allowing the eyes to rest after a full day of looking at words on pages and numbing screen time.

Speaking on screen time, social media has grown into another source of unintentional aggravation, and to decompress from it meant scaling back on networking sites. When I joined Blogger in 2008, I had developed many lifelong friends, and when more and more people branched off into other platforms, to continue those connections, my sole Blogger site expanded to six others including Facebook, Twitter, and Instagram. First annoyance came, then frustration, and finally apathy in trying to juggle so many accounts, where the only thing being accomplished was feeling worn thin. ‘Net’ depression had set in a few years before, after becoming aware that I am nothing more than a byte in the mottled background of a noisy, kaleidoscopic electron party. Try as one may to sport a hardened carapace and keep up with all the various venues of pith and negativity, it wears you the hell down. The good news is that I know I’m not alone. Recent studies in the American Psychiatric Association have shown that “multitasking is related to poorer attention, cognition, and mood.” In previous years I could tolerate the extra nuisance, but in this year, it became constricting. So, I cancelled my accounts with Tumblr, Pinterest, and several others. Felt good, and, for the most part, none were the wiser. The world isn’t expecting my every comment and I realized it was okay to let some of it go.

To continue to counteract the blues, I became more active in my real-life community, mostly by wielding my words in civic duty, which gave a sense of renewed purpose. Compelled by one too many school shootings—one IS too many—I took to my keyboard to compose letters to my congressional representatives. I didn’t want to be just a good-intentioned rhetorical Twitter pugilist—it was time to turn my concerns and anger into something proactive. Now, to counterbalance my stance as a righteous S.O.B. here, I appreciate there is still much more I can do, from joining demonstrations to marching in DC, and my only excuse is that unless the protest is happening in my front yard, I don’t go. Hell, a couple of years ago when Bouchercon was in Albany just a few miles down the road, I couldn’t be bothered to gas up the Jeep. Maybe it’s from so many years of constant traveling, but ultimately an excuse is just not a good enough reason.

The ancient Mesopotamians noted that Mars has a 47-year cycle: it journeys forth and then returns to its original place among the stars in relation to the sun and Earth, ready to begin again. And so, there is a glint in my life force at this stage. Wan at times, for sure, but flickering, and what keeps it lit is a happy family unit … my charmers, akin to a star sparkling in an otherwise vast, cold universe of dark, empty space. My path is not coming to an end but more like beginning again, to write and publish with refreshed vigor.

Its become too much for me as well