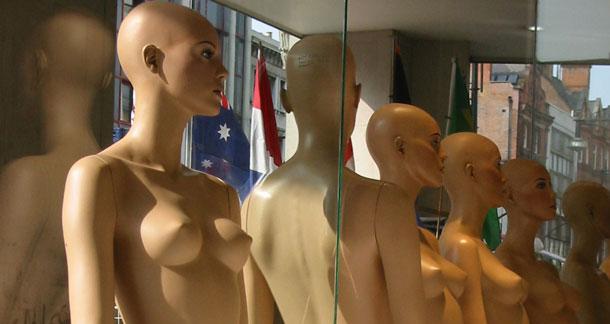 It’s common for many writers today — beginners and pros — to deliver characters on a sort of post-modern pedestal. Instead of offering compelling, substantive, flesh-and-blood people, the writer is instead content to use characters as a social springboard to evangelize some sardonic commentary about the modern world as we know it. Regardless of its wide usage, producing characters for quick reader judgment is almost always a bad idea. Good fiction works best instead in an environment where characters dodge social “representation,” and even force readers to suspend their moral judgment of them.

These easily assembled “mannequin” characters have always existed in bad writing, but they’ve gained a lot more prevalence in today’s irony-soaked culture. Typically, the formula plays itself out with this predictable pattern: the writer creates a satirical straw man, pits him/her against the modern world, and then records the inevitable fallout that ensues. The writer and reader then proceed to exchange winks and nods over the character’s shoulder, participating in a sort of post-modern laugh track as we watch the poor putz in the middle get his/her just desserts. The trick can be great for cheap yuks, but more often than not it’s the hallmark of some seriously bad writing.

Other times, these characters are created not because the writer doesn’t know what he/she is doing, but solely due to financial pressures in the market. In today’s identity-obsessed environment, how many times have you heard someone say: “As an X, I don’t feel that Y character (pick a TV show/movie/book) reflects me.” Here’s the problem: a good character isn’t supposed to “reflect” you. A good character should cast the illusion that he/she exists for his/her own purpose, not serve as a placard for your gender, race, class, political party or fly-by-night subculture. And they certainly shouldn’t be used as walking stenographers for the writer’s political or social philosophy (sorry Ayn Rand fans).

Any time the writer and reader find themselves rubbing elbows — either over their established superiority to the characters or the tacit acknowledgement that the character represents some social slot — it’s only because the reader has been clued in on what “types” of characters these people are from the beginning. In other words, in order for readers to “get” the gag the writer must deliver easily identified tropes that the reader could pick out of a crowd before arriving to the text. These are the very sorts of pre-assembled cutouts writers are told to avoid when creating characters, and as such these writers are committing cliché and passing it off as “edginess.” The characters aren’t individuals, readers' perceptions remain intact, and the writer isn’t being nearly as clever as he/she thinks.

Funny thing is, most writers guilty of this would balk at the idea of applying the same technique when working in the opposite direction. Unless you’re twelve years old (or a typical Hollywood movie fan), no one wants to read about a “white knight” character who saves the day and gets the girl, all while managing to run a successful hedge fund/political office/spy ring — essentially, an Uberman for some infantile Apple Pie ideal. Sure, sitcoms and movies are full of this stuff, but with fiction writing comes a heightened expectation. We laugh when movies have the contempt to offer prefabricated character molds that juke us into saying “Oh, we like him!” yet here the same behavior is being applied: the writer is using characters as cheap props that rotate around preexisting social norms, and then captioning the scenes with cues that scream: “Hey, we’ve all met ‘this’ guy before!”

Characters should appear as if they’re existing on their own terms, not because you want to highlight some dime-store irony that exists in the world outside the book. Political ideologies and cultural movements work in numbers; characters are individuals; they are flesh-and-blood people that suffer and make mistakes. In good fiction, readers should be placed in a position where they are inevitably forced to suspend any judgment of characters they may have. Readers are always going to judge characters, but it’s the writer’s job to exploit that capacity to judge, not follow its lead. Give us things to love, and give us things to hate, so the resulting piebald of complex characteristics ultimately forces readers into a judgmentally reserved stalemate. Any time you’ve forced your readers to reassess their judgment — any time you’ve proven their preconceptions wrong, in other words — a minor epiphany is experienced by the reader, and this is followed by a sort of psychological surrender to the text. The story maintains its authority, the character continues to evolve, and the narrative serves to compel. Oh, and the reader keeps reading.

Charles from Portland is reading Mongrels by Stephen Graham Jones October 27, 2011 - 11:44am

Well said, this is the thorn in my side when trying to read a lot of modern fiction.

but sardonic commentary is what I do best!

I am interested in this article and think it's well done, but I'm not quite sure what the intent is here. There will be a contropuntal ideology to a character, without that what does the story have to conflict with? I think the argument here is for better fleshed out characters, but you know there has to be some moral or ideal in a character that is challenged for some development to happen. Just fill that out with some actual humanizing shit as well. But you know if I could pull that off seemlessly I'd be teaching an MFA program, or sitting on Park Ave. collecting royalty checks.

Any time the writer and reader find themselves rubbing elbows — either over their established superiority to the characters or the tacit acknowledgement that the character represents some social slot — it’s only because the reader has been clued in on what “types” of characters these people are from the beginning. In other words, in order for readers to “get” the gag the writer must deliver easily identified tropes that the reader could pick out of a crowd before arriving to the text. These are the very sorts of pre-assembled cutouts writers are told to avoid when creating characters, and as such these writers are committing cliché and passing it off as “edginess.” The characters aren’t individuals, readers' perceptions remain intact, and the writer isn’t being nearly as clever as he/she thinks.

i'd like to point out that i just was required to read "the pura principle" by junot diaz, and thought this the ENTIRE time. not only did it feel edgy just for edgy sake, but it also conjured imagaes of diaz all well quaffed behind a computer monitor somewhere smirking at his own cleverness.

This can be a struggle for someone still trying to find their voice, especially if you're writing satire, which is often a tempting choice for beginning writers because they are quickly and easily sketched and the beginning writer can move forward with their story without losing themselves in the insecurity of whether or not they've portrayed what they intend. (mumble mumble pronoun agreement... yeah yeah).

Anyway, I think this is important stuff to keep in mind, although I think it would be more helpful with a series of examples. While I feel like I understand what is meant, to be honest I can't think of an example of my own except in my own stories. The thing that pops into my mind right away though is the show 30 Rock. They do it constantly in 30 Rock as a joke, and I actually dig it, but totally agree that its place in written fiction is really limited.