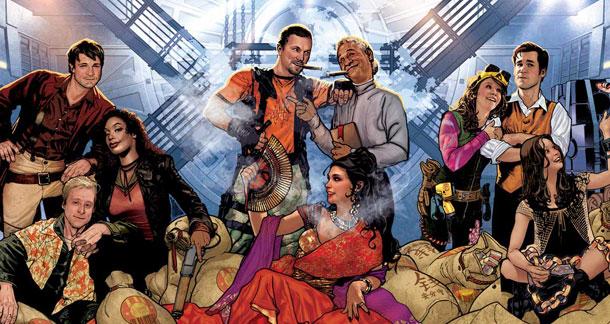 Certain television shows - anything in the supernatural, science fiction or superhero oeuvres - appear to be made for comics. Particularly because many of those shows suffer from limited budgets and relatively low ratings, but benefit from vehemently loyal fans who are reluctant to say goodbye.

This isn't a particularly cool admission, but even after ten years, I was hesitant to leave Smallville behind - and now I don't have to! DC Comics recently started selling a Smallville Season 11 digital comic book written by Smallville writer Bryan Q. Miller, who wrote some of the series' best episodes. With one of the series' longest-tenured writers on board, the comics boast the same voice and atmosphere of the show, and it's a joy to see all of the old characters (Clark, Lois, Chloe, Oliver, Lex and others) continuing in their adventures a year after fans thought we'd said goodbye to them forever. Another benefit of the comics is that they can incorporate other DC characters. Smallville was never able to feature Batman on the series thanks to the iron-clad grasp the Nolan films have on the rights to the Caped Crusader. Season three guest star Adam Knight (Ian Somerhalder) was thought to be the closest approximation of the character the show could get away with. But it was recently announced that Batman (and Nightwing!) will star in the next issue of Smallville Season 11. This is something that could never have happened on the show.

Of course Smallville is only the most recent in a long line of post-television comics, the most popular of which is probably Buffy the Vampire Slayer Season Eight. That's the first TV-based comic I'd ever read, and it's a really extraordinary achievement. Published by Dark Horse Comics from 2007-2011, Buffy Season Eight was written by Buffy VIPs Joss Whedon, Drew Z. Greenberg, Drew Goddard, Jane Espenson, Jeph Loeb and others, joined by comic giants like Brian K. Vaughn. The series was thrilling, featuring cameos of long-loved guest stars, as well as some brilliant arcs. Buffy characters Angel and Faith have their own comic series as well, and Whedon's critically acclaimed Fray takes place in the future of the Buffy universe. Whedon had a heavy hand in the Buffy series, lovingly crafting the story and guiding it to its conclusion.

Whedon (who is a comic talent in his own right, writing several non-television related runs on series such as The Astonishing X-Men and Stan Lee Meets Spider-Man) also has a history of turning his sometimes short-lived television shows into comic series, creating comics around such ill-fated shows as Dollhouse and Firefly. The Firefly comic (called Serenity) fills in a lot of the blanks in between the show and its follow-up film (also called Serenity), such as Shepherd Book's mysterious backstory. And the Dollhouse comic might actually be better than the television show, which never really found its narrative footing.

Television shows don't have to be off the air to be made into comics, as we already have terrific runs based on HBO's True Blood and The CW's Supernatural. True Blood is published by IDW, and written by Daredevil and Green Arrow writer Ann Nocenti, along with Michael McMillian, who actually stars on the show as the Reverend Steve Newlin! And Supernatural has had a variety of runs through the show's so-far seven year tenure, including a prequel run that shows the early lives of the Winchester fellas, and the most recent mini-series "Caledonia", published last year by DC guru Geoff Johns and Brian Wood, following Sam as he visits the U.K. during a break from his time at Stanford (also taking place before the pilot). And before it was announced that fellow CW sci-fi thriller Fringe would get a fifth and final season, creators Alex Kurtzman and Roberto Orci planned to wrap up the story in graphic form. Of course Dr. Who, the longest running science fiction show of all time, has had tons of different comics written, following the many different Drs.

What I love about all of these comic series is that they are uninhibited by budget concerns or actor contracts. With the same creative team behind the television shows penning the stories and with the likenesses of our beloved characters in full color before us, we can see what showrunners would do with their stories had they unlimited funds and time. I wonder how many issues of Smallville, Buffy, Firefly or Supernatural feature storylines that the writers wanted to include on the show but could never make work because of real people, money and physics. This format allows for boundless opportunities, as well as stories that can go on for years after the actors have moved on to other projects, and TV timeslots have been released to new shows. Thanks to these comics, fans truly never have to say goodbye.

Comixology has True Blood comics for 50% off this weekend.