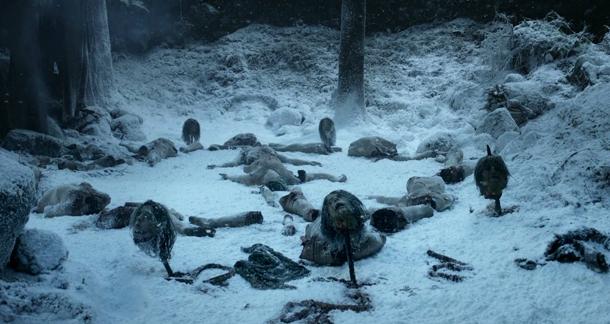 By now most of us have heard the saying, “Winter is Coming”, from George R. R. Martin’s A Game of Thrones. In the book and television show, it is the motto of House Stark, the guardians of the northern part of the kingdom, and those who are positioned in one of the worst places for that winter. Winters in Westeros, we’re led to believe, are bigger than just a winter on Earth, more severe, longer, lasting years. Summer at the beginning of the series has lasted nine years. We’re to expect that winter in that world will last at least that long, too.

“In this world only winter is certain.” - George R. R. Martin, A Dance with Dragons

The prospect of an eight year long winter is a frightening one to me, but then again, for a long time, a season of winter used to be a scary time for people throughout history. For those in the northern hemisphere, in certain climates, winter meant cold, a season where nothing would grow, where conditions were even harsher than normal. Of the basic needs, winter affected food gathering capabilities, shelter, and travel, and those affected commerce and more. Even war was halted for the season with armies holing up in winter quarters.

And then there was the dark. Winter has the shortest days and longest nights of any season. In addition to this aiding the aforementioned cold, dark is, well, scary. It was bound to have a psychological effect on people at the time. It’s no wonder that the winter solstice, the shortest day of the year, but also the beginning of the sun’s return, featured into so many festivals of light and holidays like Yule, Christmas, and Saturnalia.

Winter has the shortest days and longest nights of any season. In addition to this aiding the aforementioned cold, dark is, well, scary.

All of these elements factored into my own worldbuilding for my middle-grade novel, currently out on submission. In my book, the world is kept in perpetual winter as well, and I had to delve into what that would mean for the people living there. They wouldn’t be able to grow crops seasonally, for example. Without plants (grass or hay) for livestock to eat, the animals would begin to die out. People would therefore have to rely on other food sources. Fire would be an important element, to protect against the cold. And those who could provide firewood would be important parts of the society. Farmers wouldn’t be needed, though hunters and trappers would. For me, I drew on the idea of hunger, scarcity, and this helped guide my novel, from the motivations of the characters to the powers employed by the architects of winter. Of course, in addition to examining the issue, I learned from some of the greats.

One of the most popular is, of course, C. S. Lewis’ The Lion, the Witch, and the Wardrobe. When the Pevensies enter into Narnia, the land is under the sway of the White Witch, practically the embodiment of winter. She keeps the land in perpetual winter (and outlaws Christmas, as they learn). As spring starts to come to the land, it is because her power is weakening.

Ultimately, the witch’s crime seems to be in halting the regular cycle of the seasons for a hundred years. Christmas, in the book, is seen as a good thing, a normal part of the year, but the witch keeps the word in stasis. One of her key powers was to turn others to stone, another symbol of halting or freezing.

This idea of a natural cycle comes up in the legends of faerie regarding the Seelie and Unseelie Courts. The Seelie are generally regarded as the “good” faeries, and the Unseelie, the “bad.” Various depictions associate the Seelie Court with Summer and the Unseelie Court with Winter. This isn’t a hard and fast rule, though. For example, in The Dresden Files by Jim Butcher, both the Summer and Winter Courts can be dangerous, and the balance is what is ultimately important. Queen Mab, the queen of the Winter Court, can be evil, but as depicted in the most recent book of the series, Cold Days, the Winter Court also serves a needed purpose (which I won’t spoil here).

Winter is also associated with death. There’s no denying that there’s a basic association in western culture between life and heat, fire and passion. In contrast, cold is associated with lifelessness, cruelty, emotionlessness. The dead, or the undead, are often the coldest of all. George R. R. Martin folds this into the idea of endless winter by having winter be the time of the White Walkers, undead creatures who come with the snow. Just exactly what the White Walkers are and how they came to be isn’t explained, but they are portrayed in the series as deadly, and unrelenting. Alien. Contrast this with the dragons which are also dangerous, but in a more animalistic way. And the dragons can be controlled. The White Walkers, on the other hand, seem a force unto themselves.

In Tad Williams’ Memory, Sorrow, and Thorn series, the Norns, the enemy, an elf-like race, are associated with winter as well. And their leaders, Ineluki the Storm King and Utuk’ku, the Norn Queen, are also undead. Note that there are other peoples who live in cold and icy climates, the Qanuc for example, but they either work with the environment, or against it. The Norns seem to embody those elements.

All is not bleak, however. In all of the mentioned works, there is hope. The coming of the Pevensies and Aslan signals the return of Spring to Narnia, beginning with the return of Father Christmas. In A Song of Ice and Fire, we have that fire which we hope will stand against the ice. In all of these stories, the hope is that winter can be conquered so that spring can come again, bringing new life and renewal. The cycle must continue.

I, for one, am content with far more mundane winters, no matter how bitterly cold it gets. What are your favorite examples of winter in literature? Fantasy or otherwise? What books do you like to curl up with when it's cold outside?

Joshua Chaplinsky from New York is reading a lot more during the quarantine January 11, 2013 - 5:29am

"Winter is Coming" is the motto of House Stark. "Winter is Come" is the title of this column. Have we asked too much of our readers to differentiate between the two?

Because 'Winter is Come' makes so much sense.

Joshua Chaplinsky from New York is reading a lot more during the quarantine January 11, 2013 - 6:45am

Old English, motherfucker. Do you speak it?

Joshua Chaplinsky from New York is reading a lot more during the quarantine January 11, 2013 - 9:55am

It is a form of present perfect passive that was used in Old English, which is a style of speech featured in fantasy novels such as Game of Thrones.

Publicly correcting grammar this way is trite and trivial and disrespectful to our hard-working writers, especially when you are wrong. If you want to point out an error, please do so politely or through PM, not in a condescending, smarter-than-though way. You have successful trolled me and drawn me into a stupid internet argument, so this is the last I'll say on the matter.

Fair enough, my apologies. Likewise for responses I feel.

Joshua Chaplinsky from New York is reading a lot more during the quarantine January 11, 2013 - 10:53am

Ah shit. You got me on that one.

I read a really good fantasy with a winter setting recently called Something Red. It was one of those surprise finds that I just picked up in the library without knowing anything about it or the author. The threats posed by the winter season lend additional complications to the storyline, and help to sustain a sense of suspense and atmosphere throughout.