William Powell And 'The Anarchist Cookbook': A Defense 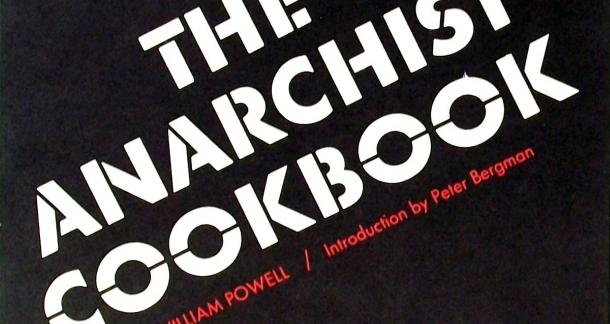 You might not know the name William Powell, but you've almost certainly heard of his book, The Anarchist Cookbook, and you might have seen a new documentary, American Anarchist, about William Powell and The Cookbook’s legacy of violence.

I watched the doc. We all use our platforms as we wish, and it seems the filmmaker used his to try and verbally beat a confession of wrongdoing from Powell. Through a series of interviews, it becomes pretty clear the filmmaker blames Powell for some of the violence that’s come about with The Cookbook on the periphery. Or, at the very least, the filmmaker seems to feel Powell doesn’t feel bad enough about the book’s legacy.

This is my platform today, and I’m going to use it to defend William Powell and his creation of The Anarchist Cookbook.

In Case You Live Under A Rock

The Anarchist Cookbook is a famous manual of anarchy, protest, and very specific bomb and weapon making instructions. It was published in hard copy, but it was with the emergence of the internet that the thing, or various iterations of the thing, really took off. It was practically a rite of passage to download a version of The Anarchist Cookbook if you were a teenager in the 90’s.

While the rebelliousness stopped at downloading and perhaps viewing The Cookbook for most, that wasn’t the case for everyone. Timothy McVeigh, a bomb in Grand Central Station, another bomb in a reporter’s car, The Weather Underground, a series of abortion clinic bombings, a white supremacist group plotting to kill Rodney King, the London 7/7 bombers, multiple school shooters—all of them had copies of The Cookbook.

Let’s get into the reasons The Anarchist Cookbook came about.

What do you think of when you think of the 70’s? Woodstock capping the 60’s? The Sex Pistols and the Ramones? The Godfather? The Sears Tower? The Exorcist? Hank Aaron? Muhammad Ali? American muscle cars? Roots, Star Wars, and disco?

We have a tendency to dumb down the recent-ish past to a given time period’s legacy of pop culture. Music, fashion, movies. When we do that, it’s hard to understand where The Anarchist Cookbook came from.

If we look at the early 70’s holistically, it’s not hard to understand why a young man might be angry, frustrated, and looking to find a way to shift what he saw as an imbalance of power.

It’s crucial to note that Powell never blew anything up. He never killed anyone. He was never directly involved with groups that did. The act of writing the book itself was where it started and ended for Powell. Writing The Cookbook was his protest. It wasn’t about making bombs for him, and I would submit that it wasn’t really his aim for others to make bombs either. In fact, I would postulate that the message sent by the book was not a message to his peers about bomb-making.

From the Los Angeles Times:

In a foreword, Powell advised that he hadn’t written the book for fringe militant groups of the era like the Weathermen or Minutemen, but for the 'silent majority' in America, those he said needed to learn the tools for survival in an uncertain time.

I think Powell wanted to use the book as a tool to speak to the general populace. Not to encourage them to make bombs, but to help them feel empowered, to feel that they were on equal footing with authority figures.

This is giving Powell some serious benefit of the doubt. It’s assuming that he was trying to express something and found a problematic, very flawed way to do so. But the rest of Powell’s life would suggest that benefit of the doubt is worth exploring. Especially considering Powell’s quick turnaround on The Cookbook and his desire for it to simply disappear.

Powell Thought 'The Cookbook' Would Vanish

Long story short, Powell’s publisher always owned the rights to The Anarchist Cookbook. Which meant that when Powell decided, only 5 years after The Cookbook was first published, that he’d like to see the book go out of print, he had no say in the situation.

However, Powell wasn’t too worried because he thought his book would fade into obscurity. This seems naive, maybe even purposely so. But only because we’re looking back.

The Anarchist Cookbook is the only book of its ilk that still maintains notoriety today. Have you ever heard of the book 150 Questions For A Guerrilla? No? Interesting. Because the author sued Powell for copyright violation, saying Powell ripped off his book. How about Kurt Saxon and The Poor Man’s James Bond? Steal This Book by Abbie Hoffman is probably the silver medal for notoriety, but despite being available for free online and also containing bomb-making recipes, you rarely, if ever, hear it mentioned in connection with a tragedy.

The Cookbook was one of a HUGE number of books of its type, and it’s seemingly the only one of its type that hasn’t faded from public consciousness. 9 times out of 10, books of its ilk vanished. While Powell was incorrect and his book didn’t fade out, using the best information available at the time, he was totally right to think that it would.

And because Powell didn't have any control over The Cookbook's continued publication, the only real option available to him was to move on with his life and hope for the best.

Look at a tragedy and you’ll find a bogeyman.

I was in junior high when Columbine went down. And there were a lot of bogeymen. Marilyn Manson, a convenient bogeyman because he looked the part. Doom. The misunderstood Goth scene. Trench coats, in general. And, of course, The Anarchist Cookbook.

The hallmarks of a media bogeyman are these:

1. The association is all correlation, no causation.

2. The material or person in question is never really understood or explored, and only a very small percent of the whole is highlighted.

3. The bogeyman diverts attention away from the people truly causing/allowing harm.

The Anarchist Cookbook fits all of these to a T.

It’s very natural to ask why. To wonder why something awful happens. And because the answer is almost always non-existent or difficult to really understand, we're often settling with an answer that’s close enough. Something that will do for now. Something that doesn’t force us to ask big questions we don’t want to ask, questions about things like gun control or mental health. We’ll settle for something that’s easily compressed into a 5-minute news clip. Something with name recognition. Something like The Anarchist Cookbook.

Powell, unlike most of those who committed crimes associated with The Cookbook, lived into his 60’s.

It was only 1976, 5 years after The Cookbook's initial publication, when he converted to Anglicism and tried to stop further publication of The Cookbook.

In 1979 he started a teaching career that took him to Saudi Arabia, Tanzania, Indonesia and Malaysia, and he specialized in working with marginalized children and children with special needs. This is what he did for the rest of his life.

The only “editorial review” of The Anarchist Cookbook on Amazon is a message from Powell. A message of regret.

The central idea to the book was that violence is an acceptable means to bring about political change. I no longer agree with this...I want to state categorically that I am not in agreement with the contents of The Anarchist Cookbook and I would be very pleased (and relieved) to see its publication discontinued. I consider it to be a misguided and potentially dangerous publication which should be taken out of print.

Powell learned, grew, and based on what he found, he changed his mind. Which is something that we love in the sciences, something we’d like to see more in politicians. But with art, we treat a change of thought with skepticism. Artists are being hypocritical, untrue to themselves, or selling out.

In making art, artists surrender their ability to grow and change as people, and that’s not right. We like to quote Whitman, say we "contain multitudes," but maybe what we want is for those multitudes to stay contained and out of sight.

William Powell's legacy should be about empowerment. He wrote The Cookbook to empower people. It was a crude, early, flawed, failed attempt. He then spent the rest of his life empowering youth all over the globe. In all his acts, good and bad, he was championing the power, abilities, and capability of the people who desperately needed a champion.

William Powell's legacy won't be his teaching and working with educators in impoverished, marginalized parts of the world. Even though that's how he spent 40 of his 60 years on Earth.

William Powell's legacy won't be The Anarchist Cookbook either.

The tragedy of William Powell is that his legacy will serve as a cautionary tale: When it comes to the top line of your obituary, the thing you'll be remembered for—you're truly powerless.

Uh, also, ever made anything from 'The Cookbook'?

Saw the documentary and came away thinking the filmmaker let his agenda get the better of him. At one point he really presses Powell to shoulder responsiblity for how people used his book, even after Powell has politely declined to do so. And while Powell may have willfully ignored how often his book was tied to various tragedies, he appeared genuinely appalled that was the case. Oh, and the reason he might have missed the news reports is because he was teaching underprivelged children in underdeveloped countries. I give the guy a pass. Judge not, people!