Why You Should Never Buy A Writer A Notebook 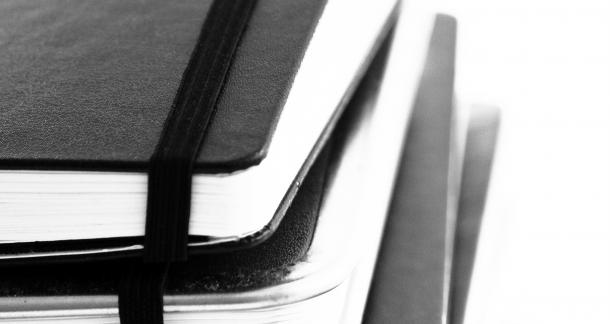 It’s a no-brainer. Your friend, your mom, your person, is a writer. You aren’t going to buy them a new Macbook. You thought about gifting that vintage typewriter until you tried to lift it, learned it weighs 800 lbs, and priced it at about a dollar for every one of those pounds.

No problem. You go with a notebook. Simple, practical. Supportive. Good choice, right?

We Have A Bunch

You know how you have that one aunt who is into...I don’t know, anything with a cow on it? And so you buy them cow stuff all the time? A ceramic cream container. Salt and pepper shakers. Everything a cow.

I have a newsflash for you. That aunt probably isn’t all that into cow stuff. Someone bought her one cow thing, then another. And then someone else saw her small shelf of cow stuff and got in on the action. Your aunt didn’t want to disabuse any gift-givers out of a sense of politeness. And so it spread, and now your aunt has a curio shelf full of cow stuff, a shelf that she can’t wait to move so it can “accidentally” get destroyed.

I like me a good notebook. But for me, and for a lot of others who use them frequently, there are some pretty specific likes and dislikes.

For example, I don’t like notebooks that refuse to lay flat. I need a notebook that lets ink dry quickly because I drag my hand across the pages like a slob.

Do you know if your writer wants something stiff or floppy? In a notebook, I mean.

Is your writer left-handed?

If you’re buying someone their first set of tools, it’s hard to screw it up. But if you’re buying hand tools for a mechanic who’s been in the business for a couple decades, they will have opinions, quirks, and downright oddities when it comes to their tools of choice. Unless you know those inside and out, it's tough to get them what they want.

You’ll Never Know If You Nailed It

When it comes to notebooks, I’m not going to look a gift horse in the mouth. Which is a really apt analogy.

That saying about gift horses. Imagine you’re a farmer. Another farmer is giving you a horse, totally free, no strings attached. Normally, if you were buying a horse, you’d inspect its teeth. But if the horse is a gift, the idea is you should take it and worry about the horse’s condition later. Take a gift for what it is, take it on faith and resist the urge to check it over, at least until the horse-giver leaves.

When I get a notebook, I can’t really inspect it and debate its usefulness. I have to either use it and accept it’s not really what I wanted, or I can be a sneak and toss it out somewhere down the line. Either way, I’m not going to honestly tell you that you’ve thrown money away on me.

Some writers feel like an empty notebook is almost a taunt. I don’t feel this way, probably because the taunts I’ve been on the receiving end of are a lot meaner and more direct. It’s hard to see an empty notebook as a taunt when your partner regularly calls you “dum-dum” to your face.

That aside, a number of writers do feel a certain amount of pressure when a blank notebook comes into their lives. A positive pressure, maybe, but a pressure nonetheless.

Giving someone a new notebook is giving them a job.

I have a three-step test to figure out whether something is a good gift. You ask three questions:

Question 1: Do they want it?
Question 2: Would they buy it for themselves?
Question 3: Is it fun?

The first question is a no-duh. The second helps you avoid a gift that really just saves a person a trip to Target. If I'd happily buy myself something, then it's not a bad gift, but it's not a great gift.

The third question, the question of fun factor, is one I instituted after my mom asked for a birthday vacuum. A vacuum passed tests 1 and 2, which is why the process had to be revised to include question 3. I'm not buying my mom a vacuum for her birthday.

A notebook is, for the most part, something that gets stuck after test number 1. The writer needs it. But they'll probably buy it themselves. As for test 3, c'mon. You can do better.

Many a writer will be totally paralyzed by the kindness of a new notebook. It's awesome, it's nicer than one they would buy for themselves. And in fact, it's TOO nice. It's too nice for the aimless scribbles that turn into a story or a book. This notebook is good, and so whatever goes in it had better be good too.

I know you don't want your writer to feel that way, but they will. This notebook will become an object that's too meaningful as-is. It will turn into "that one notebook from that one holiday where that one person got that thoughtful gift." Then it's no longer a notebook. It's a shirt you never wear because you don't want to wreck it or a set of earrings you leave at home because you can't stand losing them. It becomes something more than what it is, and it loses its usefulness.

If you want to buy someone a notebook, do it like this: Take them out for a nice lunch. Buy them a couple drinks. Then go somewhere that has a lot of fancy, fun notebooks, and tell them to pick out one they love. Hand them $50 and a tiny envelope. Tell them to bring back as much or as little change as they get. Tell them you don’t want to know how much it costs, and you don’t want them to look at price. You just want them to pick out a notebook they want, for whatever they want, and that’s the end of it. Go browse the fancy pens or the wide array of bizarre highlighters while they’re looking around.

Take the envelope back, slip it in your pocket, and walk away happy. You got them something they wanted, something they weren't planning to buy for themselves, and you made it fun.

Ridiculously Extravagant Gifts For Writers And Their Cheap Alternatives

7 Reasons Why Every Writer Should Journal