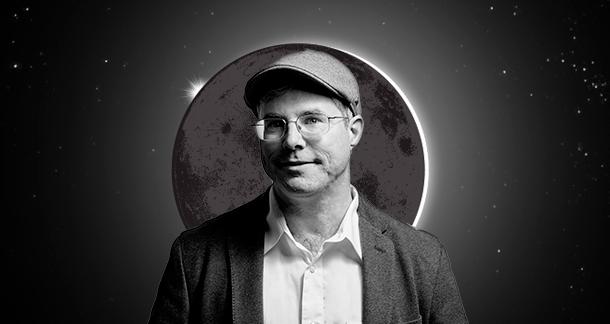 You've heard of The Martian, right? Read the book, seen the movie? Well, the novel was written by Andy Weir, and you should be more like him.

There are certain qualities that separate someone who is a writer from someone who simply identifies as a writer. Yes, there's a difference. Aside from actually putting in the work, writers are people who identify themselves by the action verb—by writing. As John August and Craig Mazin recently discussed on their podcast, Scriptnotes, the best way to make sure you're focused on the right thing is by focusing on the verb. You write. You are not a writer. People who simply identify themselves as a writer may be putting the cart before the horse (or the pen before the paper? I don't know).

What the hell does this have to do with Andy Weir? I'm getting there, I promise.

People who simply identify themselves as a writer may be putting the cart before the horse.

I may be paraphrasing, but you know I'm right. You've seen it. You haven't been one of the people saying these things because you're awesome. You are awesome, right? Yeah, you are. You're reading LitReactor, so you're probably cool. Back to the point: It's all bullshit. Real writers are people who write.

Listen, not every piece of writing gets published or needs to get published. Not everything sells or is worth selling. That's alright. Just write because you like to write. It works. I promise. And if you don't believe me, look at Andy Weir (told you we'd circle back to him).

For those of you who don't know, Andy Weir is the author of The Martian, and this month, he has a new novel coming out called Artemis. His success, though, is not the story. Well, it's not the whole story. Weir's success came as a result of his willingness to take non-traditional approaches. For example, Weir started publishing a serialized version of The Martian on his blog. He took this approach for a variety of reasons, but none of them were likely the I'll-sell-this-to-a-big-publisher-eventually-see-it-become-one-of-the-most-popular-books-of-the-year-and-have-it-made-into-a-huge-movie reason.

For Weir, perhaps the biggest reason he wrote The Martian as a serial to be released online for free was because he wasn't trying to please an audience. In a 2015 interview with The Telegraph, he said:

"I wasn’t writing for a mainstream audience. I was writing for this core group of extremely technical, science-minded dorks like me. I’m one of those guys that’ll nitpick every little physics problem in a movie. I absolutely am."

Basically, Weir was writing something for himself. And when you do that as a writer, you free yourself up to many more possibilities than would be available if you were targeting a mass-market audience. When you write for yourself, you are not worried about the millions of dollars you might make (probably won't happen, by the way), or the movie deals coming your way (unlikely), or the book tours around the world (nope). You're, quite simply, focused on the writing.

So, the first step to being more like Andy Weir is to write what you want to write. Don't worry about the market. Worry about what you like. Worry about what keeps your fingers pecking away at the keyboard all through the day or the night or the fifth bottle of Mike's Hard Lemonade (if that's your thing because really, I'm not here to judge).

Once you've written something you like, whether it's a novel or a short story or something else entirely, that's when you can start thinking about putting it in front of people. And if you've gone through an MFA program, you may think your only option is to submit to literary journals. Don't get me wrong, I love literary journals. There are so many great ones out there. But that's not the only option, especially if you want to reach people like you—much like Andy Weir did.

When you're ready to consider non-traditional methods of getting your work out there, consider some of these options:

There are a ridiculous number of (mostly younger) people using Wattpad, so if you've got a novel, or even a short story you'd like to serialize and aren't concerned about getting paid*, this is a good option.

*You should get paid for your work, but I realize that's not always realistic.

Turn your writing into something more akin to a game. Interactive fiction takes the awesomeness of those Choose Your Own Adventure Games from your youth and modernizes it. Here are a couple places to get started:

This is how I started writing. I wrote a few screenplays just for myself. Then I found a community and shared my work. I got better, learned a ton about that old cliché of showing and not telling, and found myself with a deeper passion for writing. There are plenty of free communities available, but the first step is to start writing. Try a free program like Trebly or Celtx.

Yes, video games. Write one, damnit. It's storytelling. It's awesome. It's a great way to branch outside the traditional prose model and get a new version of your story into the world. With a plethora of game making and writing software available, it's not difficult to get started. Check out Scratch, Construct, or Game Maker Studio if you're just getting started. Take a look at Unity or Unreal Engine if you're ready to take your stories to the next level.

The bottom line is that, like Andy Weir (and many more before and after him) has proven, there are alternatives to getting your story out into the world. Traditional publishing may be a goal, but it's not the only way to tell a story and have that story find a home. Write your story, the story you want to read. Then, figure out how you want to present that story to others. You're not boxed in.