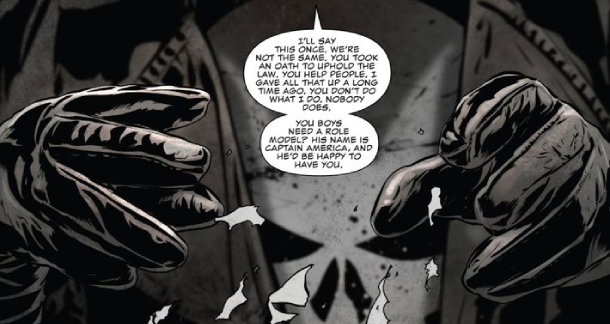 It is no exaggeration to say America is currently in the throes of a policing crisis. Citizens are having their rights violated and being assaulted by the very officers that have sworn to protect and serve them. Tired of a police force that brutalizes innocents and murders citizens, people have taken to the streets in protest. Some of these initially peaceful demonstrations have, sadly, resulted in violence, but not by the protesters. The police have been the ones rioting and attacking people. There is an unsubtle irony in showing up to a protest against police brutality with a brigade of cops in full tactical body armor with automatic weapons and tanks, but nuance has been banished from policing longer than tear gas has been banned from use in warfare. There are few examples more emblematic of the poisonous philosophies that have taken root in our most ridiculously over-equipped public servants than this literal emblem: 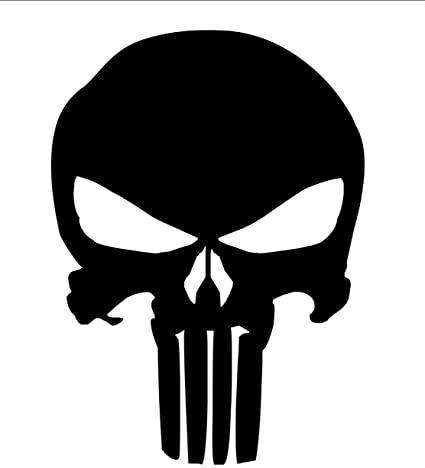 That stylized skull is the symbol of The Punisher, a character from Marvel Comics. In every depiction, he is a ruthless and bloodthirsty vigilante who wages a murderous one-man war against criminals, executing those he deems guilty without trial. He regularly performs acts decent folk would call “unspeakable,” and what the Geneva Convention would call “war crimes.” Even Wolverine, Marvel’s most prolific murder machine, thinks the Punisher goes too far.

Despite his enthusiasm for extremism, an unsettling number of police departments throughout America have openly embraced the Punisher, and even proudly wear his symbol on their uniforms while performing their public duty. Many departments even painted it on the sides of their cruisers and used it on custom challenge coins that cops like to collect like Pokemon—until public outcry made them stop. Of course, there were a few that flat-out refused. In fact, there is a government building I pass every day on my walk to work, which has flown a flag bearing a blue version of the logo for at least the last five years, and continues to do so. More recently, the logo has been spotted on many officers involved in the violent suppression of protests against police violence. If you’re not quite sure why that’s so bad, allow me to explain what the big deal is.

First, I want to make it perfectly clear that there is nothing wrong with any person being a fan of any fictional character they happen to find entertaining. Police officers are absolutely allowed to read, watch and enjoy the Punisher’s adventures just as much as anyone else. I’m a huge fan myself, having spent most of the ‘90s trying to read every single story he appeared in. You can certainly find him fascinating without condoning his actions. Nobody wears Darth Vader merch because they advocate the destruction of planets. But there is still a wide perceptual gap between me wearing a Punisher t-shirt as a fan, and the police incorporating his symbol as part of their official uniform. 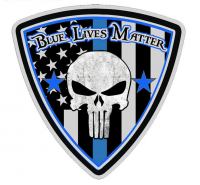 Let’s start with the least important reason first: trademark infringement. The Punisher and all of his related iconography are the intellectual property of Marvel, and the police are using the symbol without permission. To their credit, both Marvel and character co-creator Gerry Conway have voiced their disapproval of this appropriation by the police. Disney, Marvel’s notoriously litigious parent company that famously once sued grieving parents over the use of Mickey Mouse’s likeness on their dead child’s tombstone, has been deafeningly silent about the police wearing the symbol of one of their characters as they commit war crimes against unarmed civilians live on camera all across the country. I’m not a lawyer, so I can’t say whether a case of any kind could be built or won, but I imagined they would raise more of a fuss if one their properties was being used as an icon of real world atrocities. Turns out I was wrong. Although, after watching how the police handled peaceful protestors, I can understand being hesitant to antagonize them.

With that out of the way, we can dig into the core of this controversy—the character of the Punisher, and what that skull represents. Before he put on the skull, Frank Castle was a marine. When he came home from war, his family was killed in the crossfire of a gang shootout. This inspired his mission to punish the guilty, using his tactical training to wage a one-man war on organized crime. His disdain for the legal system is readily apparent from his actions, and many word bubbles have been filled with his anti-government rants. Most problematically, Frank is not just willing to kill, but insistent on it, considering most superheroes soft for capturing their villains alive. The Punisher does not take prisoners, or leave bundles of thugs tied up for the police. If you cross him, you don’t go to jail—you go to the morgue. He is judge, jury and executioner, and he only hands down one sentence. He kills his targets without the benefit of due process or a trial, which is something the police are not supposed to do.

And the Punisher doesn’t just kill people—he punishes them, committing flamboyant acts of torture and brutalizing bodies in ways that will give generations of crime scene photographers PTSD. There are few problems he won’t solve with the application of lethal force. When a lead goes cold in the comics, Frank just starts massacring low-level goons until the boss comes out to fight him like in a video game. It’s pretty clear that his footsteps are not to be followed in. The skull he wears symbolizes an outlook that is antithetical to good police work, and it represents the very same on every cop that wears it. If you don’t believe in the law or justice, how can you serve your community in good faith? How are we supposed to feel safe when the police bear the crest of a murderer? The skull’s meaning only becomes more significant once it is sewn onto a uniform, where it carries the weight of an official symbol.

Everything on [a police] uniform represents something official...When the Punisher’s skull is added in that context, it signals that the wearer holds its toxic ideology in equal esteem to their rank or oath of office.

As a society, we’ve all implicitly agreed that uniforms are important, as they are physical representations of authority. That’s why we have laws dictating who gets to wear what uniforms and how said uniforms look. You can’t just start dressing up as a cop every day because you like the respect you get from people—you’ll get arrested for impersonating an officer. And even if you are an officer, there are codes about how you can wear your uniform, like the one requiring on-duty police to wear their badge with the number clearly visible. They don’t get to add pieces of flair to express their personality. Everything on their uniform represents something official and communicates important information about the person wearing it. When the Punisher’s skull is added in that context, it signals that the wearer holds its toxic ideology in equal esteem to their rank or oath of office. It does not inspire trust in the authorities when they wear a patch professing their belief in extrajudicial murder. In case anyone has forgotten, the police aren’t supposed to kill anyone, whether they've committed a crime or not. They definitely don’t have the right to “punish the guilty”, because a court decides that, not the cops. To summarize, the guys who are supposed to be protecting us are wearing patches that profess they have the right to hurt us for any reason they can think of. We gave them so much stuff to kill people with, they’ve started to think killing is their job.

Finally, wearing this emblem on their uniform betrays a misunderstanding of the character of the Punisher just as fundamentally flawed as their understanding of the police’s role in society. Frank Castle is a desperate man acting out a cycle of vengeance because a broken system failed to deliver justice. He is not, emphatically NOT, a hero. He is a monster, only tolerated because he reserves his atrocities for other monsters. That’s not a redeeming characteristic. In the Punisher’s own words, he is not a role model to be emulated. He admonishes cops who hold him up as some kind of hero, and when a copycat vigilante is inspired by him, the Punisher always kills them.

That’s part of what makes Frank Castle such an interesting character—he has no delusions about himself. He knows what he is doing is wrong, so much so that he will stop others from doing it, and yet he remains fiercely devoted to his cause. Despite his lethal commitment to a flawed premise, the Punisher still has a code. He doesn’t murder pickpockets and jaywalkers, and above all else, he does not harm innocents. If any innocents are imperiled, Frank will abandon his mission and do whatever it takes to protect them. He has been captured and almost killed many times because of this code, and several villains have tried to break the Punisher by convincing him he has killed innocents. Frank Castle is an angry, violent man, but even he would see no reason to use force against protestors armed with nothing heavier than a sign. Ironically, the cops that wear the Punisher’s symbol so proudly would utterly disgust him. Unfortunately, we are living in a time where a fictitious vigilante understands the police’s job better than the people behind the badge in real life.

There’s a reason the badge, a central symbol of the police department, resembles a shield. It’s because the police are supposed to be protectors. Not hunters or warriors or punishers—protectors of the people. You can’t protect someone if they believe you are going to kill them, and when you show up to a peaceful protest armed to the teeth with a skull patch on your body armor, it sends a clear message: “I’m here to kill.” If your clothes are confessing to murder before you’ve even started talking, it’s going to be difficult to communicate effectively and find non-violent solutions, which law enforcement's job. Violence is supposed to be a last resort when all other methods fail, not “The Policeman’s Hello.” For the Punisher, force is the only resort, a justifiable end unto itself, and that is not an acceptable mindset for any workplace. Especially not one where everybody carries a gun. You wouldn’t leave your kid at a daycare if even one of the staff was wearing a swastika t-shirt, and by that same token, I can’t fathom why we entrust billions of dollars of military hardware to cops wearing death-squad branding. To be quaintly reductive, it’s hiring a pack of wolves to guard a henhouse.