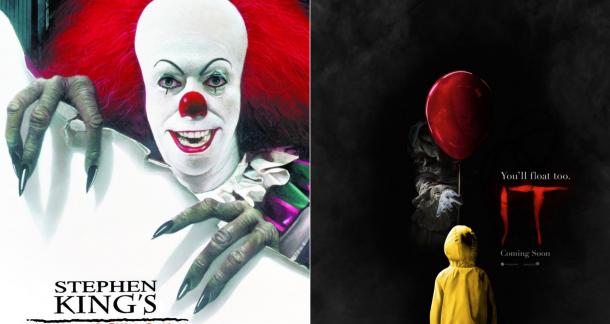 Listen, not many people know this, but IT—you know, the new movie based on Stephen King's book, the one with the terrifying trailer—is a remake. I know, it's not something you want to hear. The creativity of storytelling is being killed with all these remakes. If the original IT cannot stand the test of time, how can we expect storytellers to go on, knowing the world simply wants the same story told to them over and over again?

Maybe, we shouldn't only expect storytellers to go on, but to embrace this systematic re-telling of stories.

But let's back up. Hollywood has been churning out remakes, reboots, and sequels for decades now. And with each new one, cries over the demise of creativity echo off walls I can only assume are lined with the Next Great American Movie script. Yet, Hollywood's decision to remake movies or launch sequels has less to do with the death of creativity and more to do with awareness. And for that reason, writers should be happy remakes of movies like IT are happening.

First, there's the concept of audience awareness that plays into the perpetuation of a genre, and second, there's the new writers—the ones who may not have seen the original films on which remakes are based—that may find a fire lit in their imagination by seeing an old story told anew.

Let's separate cinema from literature for a second, even though every single Stephen King movie makes that hard to do. What's good for Hollywood may not be good for screenwriters interested in telling original stories, but that doesn't mean it's not good for authors. In an article for The Atlantic last year, Amanda Klein and R. Barton Palmer argue that the reason Hollywood turns to remakes and sequels is that it's just good business.

...most of these reactions confuse the need to make action-heavy, dialogue-light tentpole films that do well internationally with the drive to make films out of known story properties, something now called “pre-awareness.” These are two different production strategies that just happen to work well together.

That pre-awareness is exactly why the new IT film is generating so much attention. People already know the story, know the book, know the mini-series. And most loved them. This plays well for authors of novels and short stories just as much as it plays well for Hollywood. But in a different way. If the audience you're writing for already has some idea of what they're getting themselves into, you have pre-built anticipation for your work. A genre that may have died can be brought back to life via cinema's obsession with remakes.

Remakes revive. Hashtag that, put it on a t-shirt, embrace it.

Imagine if IT wasn't being remade. The horror-with-clowns genre could have continued down its tropey spiral of death. But, by remaking an old movie based on an older book, a new generation gets to help pull that genre out of the trope bucket and place it firmly in the category of "fair game."

Genres die. Don't forget that. But they can be brought back to life like Michael Myers in Halloween 666 (if that's not a movie yet, someone get on it). Look no further than westerns as an example of this death/rebirth cycle. Westerns, for all intents and purposes, died off in literature and film by the late 70s, early 80s. Sure there were exceptions (in film, the most notable is probably Unforgiven), but outside of those exceptions, mainstream westerns were dead. But they didn't stay dead. They have been partially revived with remakes of classic films. 3:10 to Yuma was remade with Ben Foster and Russell Crowe in 2007. The movie Appaloosa with Ed Harris, released in 2008, may have been based on a 2005 novel by Robert B. Parker, but the narrative of the film uses similar concepts that appeared in an older western film released in 1959 called Warlock.

See, by sticking to proven narratives, Hollywood has done a decent job of reviving the western genre. There's still a long way to go, but we've seen the genre's revival bleed over into literature as well. The above-mentioned book by Robert B. Parker is an example. Patrick DeWitt's wonderful novel The Sisters Brothers is another.

Remakes revive. Hashtag that, put it on a t-shirt, embrace it.

We tend to think in terms of our own life experiences, but I promise you, there are other writers out there with different experiences, experiences not yet developed. Writers who don't even know they are writers yet exist. And a lot of them are much younger than you or me. So, to automatically assume these writers will come into a remake having seen the original with an understanding of its history doesn't make a lot of sense. From that angle, the remade movie is a spark, not a remake.

An author who may never have seen the original movie or read the original source material (for shame!), will be introduced to something entirely new. To others, it may be familiar, but to this person, there is something special, something fresh in that remake. And that simple spark could be all an author needs to go out and write something in a similar genre or sub-genre.

It's easy to visualize this. Go watch The Italian Job again with fresh eyes. You may have even seen the 2003 version without realizing it was a remake. But what that movie did was reinvigorate a population of writers who may have only seen heist stories as gritty, dark, and depressing (that's the golden triumvirate for crime writers, if you didn't know). With the 2003 remake of The Italian Job, writers were shown (re-shown?) a witty, comedic, and fun version of the heist sub-genre of crime fiction. I won't go so far as to say the authors of books like Heist Society, Ghostman, and others were inspired by the 2003 version of The Italian Job, but you get my point.

We all need inspiration, and that inspiration can come from anywhere. While it might be fair to criticize the lack of creativity in Hollywood remakes, those remakes can help stoke the creative juices that authors need to keep creating fresh and exciting works of literature. So go see the new IT, and get writing.