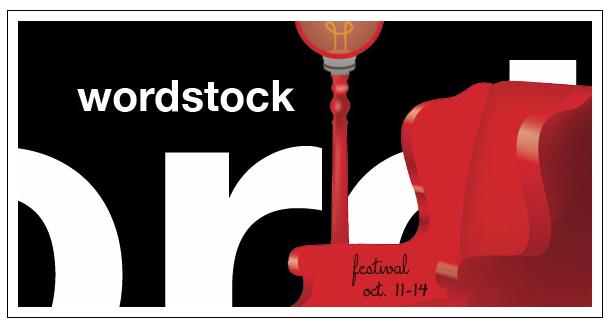 Coming home late one evening after a meeting for the Wordstock marketing team, my husband looked at me and said, “I don’t get you. You actually spend your free time talking about books and reading. You are crazy.” I laughed and agreed that, yes, I was probably crazy. Not everyone would donate their time to planning a huge literary festival, or attend hours of meetings figuring out ways to get people to come to said literary festival. Not everyone would spend their weekends sitting in booths at street fairs handing out bookmarks and chatting up strangers about the newest fiction titles. Not everyone would, but I do, and you know what? This is what keeps me sane.

I spend most of my waking hours working on things that have little interest to me personally. It’s called a day job. Even at its best, it’s 40 hours spent on emails, memos, and business mumbo jumbo that puts cash in my pocket, but does not fill my soul. The balance of those hours are mostly spent sleeping or attending to domestic chores. Again, necessary, but not fulfilling. Without a reprieve, this schedule gets monotonous quickly. So year-round, I take a little time out of my schedule of have-to-dos to do something I want-to-do with a bunch of other people who want-to-do the same thing. What do we do that’s so great? We plan a festival. A festival about books, writing, reading, literature, and love of the word in all its forms.

The festival is called Wordstock and it happens every October here in Portland, Oregon. Wordstock is an organization that was originally conceived as a reading and writing outreach program for the schools. They sent writers to work with students and teachers to enrich the writing culture and promote literacy. They continue this mission year-round. But about 8 years ago, they decided to add a celebration of the word to their repertoire, and the Wordstock Festival was born. It has since grown into a week-long extravaganza of readings, films, lectures, live radio shows, and other lit-related events punctuated by a two-day book fair that takes over the Oregon Convention Center. The fair hosts nearly 200 writers who read, participate in panels, and teach workshops. Hundreds of exhibitors (like our very own LitReactor) come from all over to share their love of books in one way or another. Literary magazines, publishers, schools, writing organizations, and more come to rub elbows with others who appreciate the written word. There are nine stages, a kids area, author signings, free books, a bar, and whole lotta writerly hullaballoo!

It is said that writers are natural loners, but five minutes in the Wordstock book fair  will convince you that the world of literature is more social than you might imagine.

Aside from the double plug for the Wordstock Festival (Holla!) and LitReactor (Booya!), I am writing about Wordstock because volunteering for the festival is one of my greatest joys. Wordstock has only three (count ‘em --THREE!) paid employees, the rest is done by a team of dedicated volunteers who come back year after year to help out. I am one of those volunteers, and I love my job. Wordstock isn’t my first love, though. In Seattle I offered my services to several local arts organizations including Richard Hugo House and The Fremont Abbey Arts Center. My level of commitment varied from year to year, but I always liked to have some other outlet for my energy besides work and chores. Volunteering helps me get up from the desk, step away from the sink, and hang out with a bunch of like-minded people who give their precious time for the sake of art and literature. While it may seem crazy to some (including my husband), it keeps me sane.

Volunteering for organizations like Wordstock has other perks, too. In addition to the year-round planning volunteers like myself, hundreds of people help out at the festival and at other events throughout the year. Just this past weekend, I sat in the Wordstock booth at a street fair and chatted with the other volunteer who had signed up just to man the booth for a few hours. He was new to Portland, and he wanted to see what the festival was all about, to get out of the house, and to meet new people in his new town. This is exactly why I got involved in Wordstock in the first place. I was new to Portland, I heard about the festival, and I signed up. I didn’t expect to get so involved, but I’m glad I did. I have met some amazing people this way, and found other writers to hang out with, and made some fantastic friends. Not to mention I get to attend the festival for free (not that it’s very expensive $7 day/$10 weekend.) I also get to learn about a whole slew of new books coming out. I get to learn about the writers in my area. I get to meet globally known authors. I get to hang out with whole crowds of wordy peeps like me. It’s Word Nerd Heaven.

Why you should (at least) go

If you don’t have time to volunteer, consider at least attending a literary festival or conference. Whether it’s Wordstock, the Brooklyn Book Festival, or the Associated Writers Program (AWP) Conference (click here for a list of conferences and programs), stepping away from the keyboard for a few hours to hang with fellow bookworms can give you that infusion of inspiration you need. It is said that writers are natural loners, but five minutes in the Wordstock book fair or AWP conference will convince you that the world of literature is more social than you might imagine. The first time I attended the AWP conference, I was astounded by the throngs of people. Literally thousands of people in one place who love words, writing, reading, and learning. I took tons of notes that weekend for story ideas and projects. Some of those ideas actually morphed into full fledged projects including a bilingual writing class for my seventh graders and a free writing club in Seattle. All that energy might be just the push you need to finish that chapter, start something new, or get that grad school application finished.

As a LitReactor reader, chances are that you are already interested in being a part of a writing community. Why not take it a step further and attend your nearest writing conference or book festival? And if you think that’s fun, why not sign up to volunteer? Like Wordstock, many of these festivals are run by volunteers, and most would welcome any time you have to give. Attending and/or getting involved in writing events like these may not put cash in your pocket, but it will enrich your life both on and off the page.

Come see me and some of the LitReactor gang at the Wordstock Festival in Portland, Oregon this October 11-14th. Click here for a full list of events, authors, and workshops. If you are anywhere near Portland, you gotta check it out! Plus, stay tuned to find out more about the West Coast LitReactor Meet Up that will happen in Portland the same weekend! Bring your book bag and your nerd glasses--it’s gonna be awesome.

This is my first year volunteering at Wordstock. I'm excited!

I love WORDSTOCK and volunteering I get to be up close and personal with other writers. I can look at books I might not see or know about as well as authors I may not have heard before. The classes are great if you can afford them but the experience of being there as a volunteer is exceptional. I hope to meet more authors and pitch my new manuscript to a publisher.

I've only been to one Wordstock so far.