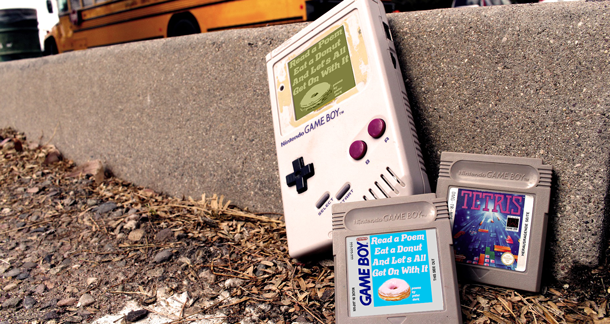 I did it. I put a book on a Gameboy cartridge.

That’s right, anyone with a Gameboy, 4 AA batteries, bird of prey eyesight, and a desire to read one of my books can finally achieve their very specific dream.

But this isn’t about a victory lap, although it IS an achievement for me—I am NOT smart.

This is about why.

Why would I make the effort to do something so pointless and silly? 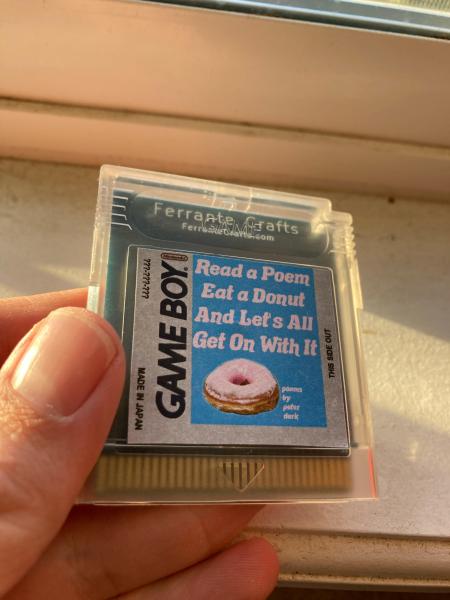 I really suck at author interactions. Even with people I know from before they were famous published authors, which is only a couple people, but still, it doesn't seem to matter. I suck at talking to someone across a signing table.

I don’t think I’d do a whole lot better propped up on the other side of the table. I’d probably end up on one of those Twitter threads where people talk about bad celebrity interactions. Just for extra sting, the posts about me would start with, “He’s not really a celebrity, but…”

I need to improve my authorial, chatting-with-people game before I even consider selling at a table, and the game cart gives me a conversation piece. A launchpad, if you will.

It gives me something to talk to readers AND authors about. Because even though I’ll be the worst writer on any convention floor, guaranteed, I’ll probably be the only one selling a book on a Gameboy cartridge. That's something, at least.

It Does Say Something About Me As A Writer

I don’t take myself all that seriously. I’m here to entertain. Most of what I write is silly, and I'm looking for readers who are ready for that.

There’s only so many ways I can say that in prose. The mere existence of a book on a Gameboy cartridge is another way for me to get the message across.

Only a goofball would put a book onto a platform that's mostly inaccessible, and even if you've got it, it's not a good reading experience.

I'm the goofball who'd do it, and I'm looking for my fellow goofballs who'd appreciate it.

When I look at the books I’ve got on the shelf, for a lot of them, I remember where I was when I finished them better than I remember what happened in the story. When I see The Road, I remember turning the last page while laid out on this sectional couch in my old apartment, a couch someone was throwing out. I remember reading I Loved You More in the bathtub a little drunk on expired beer.

Seems to me beer doesn't really expire. Not to where it won't do what's intended.

Meeting me is not going to be an experience for anyone. I hate to let you down, but if you were anticipating meeting me in person for some reason, it’s probably better you find out now. At least spare me having to witness the disappointment in real time.

Coming by a table and picking up a Gameboy with a book on it, that’s an experience. Okay, it’s not like having sex on the hood of a car while fireworks blast up above you, but as far as meeting a stranger at a folding table in a hotel event space, it’s not bad.

I think that’s the job. Maybe not of writing, but of selling books. Give someone an experience. Something they hadn’t considered before.

Some people provide an experience by writing something insightful or thoughtful or clever. I provide that experience via a goofy gimmick.

I will fart a book out onto an outdated format.

This whole thing is a gimmick, but it’s not a trick.

The difference between a gimmick and a trick is that with a trick, I’m making you believe something that’s not real.

A gimmick doesn’t hurt anyone. It delivers what’s promised. I’m no different from the first person to make a pop-up book, or a Bible where everything Jesus says is in a different color.

Well, maybe that last example is going a little far. I’m different from whoever did that. For many reasons.

It’s not okay to trick someone into buying one of your books. But a gimmick that makes someone look twice? Seems fine.

My books won't be sold in the airport, ever. I will never be asked to be on Oprah. Your mom probably won’t read anything I’ve written. Not on purpose, anyway.

I’ve started marketing my books as good for converting into booksafes, because in order to check for cash inside one of them, the thief would actually have to touch one. Based on my sales, the odds that a thief would decline seem to be in your favor.

I'm not going to become rich by selling my books as wonderful reads.

The thing is, I read about this dude, Roland the Farter. Guy was a jester for King Henry II.

Legend says Roland, one time, entertained the king by performing one jump, one whistle, and one fart, all at the same time.

For his services, Roland got a manor with 30 acres of land.

I am not a Cormac McCarthy or a Jonathan Franzen or a Louise Erdrich. I am a Roland. I will fart a book out onto an outdated format.

Maybe it'll get me a manor, maybe not. But it's the only way I know. 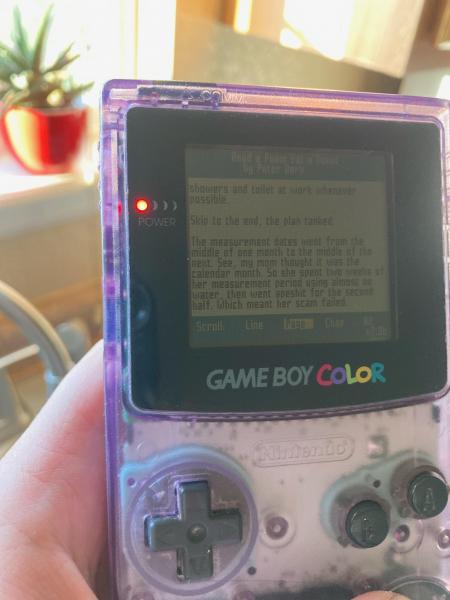 Maybe you want to give it a whirl, rip off my one shot at being a hero and steal my thunder.

Fine. You know what? Fine.

Step 1: GameBoy Book reader
This software converts your book file into a .GB file. Follow the directions, this part is easy.

Step 2: BennVenn
You can use any cart dumper/flasher/reader/writer you like. I recommend this one because it works, but also because it’s got a really great help Discord that set me on the right path when I couldn’t get things working. For a few days.

Step 3: Carts
Buy some carts. They’re usually cheap, although right now they might be pricier than normal. My advice is to A) make your book file first and see how large it is so you can get large enough carts, and B) get carts that are known to work well with whatever cart dumper you select. This will save you a lot of headaches.

Step 4: Label
I mean, you HAVE to make a sweet label. Here’s a template.

Get Game Boy Modding: A Beginner's Guide to Game Boy Mods, Collecting, History, and More! by Greg Farrell at Bookshop or Amazon

There are plenty of resources available to help you prepare for the Cisco Channel Partner Program exam. You can find study guides, practice tests, and braindumps online to make sure you're fully prepared for the exam. Additionally, Cisco offers a training course that covers all of the topics on the exam. Taking the time to prepare for the exam will ensure that you pass with flying colors.

That's seem nice and interesting. Games are pretty nice, But I am more into games that are related to physical activity.

Very interesting and creative take on the intersection of literature and technology. The idea of fitting a whole book into a small Gameboy cartridge is fascinating, and the author's account of the process is intriguing. It's a unique approach to reading and preserving literature that is both nostalgic and innovative. The process explains and the challenges very well, it's a must read for any book lover who is also interested in the gameboy world. The article is a great representation of how the boundaries of technology can be pushed in creative ways.

That's seem nice and interesting and I must say I really like it a lot. Why not you share more information on this topic as well.

Thanks for the information, I wasn't know this before, and that is the reason I keep reading your blog posts, thinks once again.

The way you explain things make a understand a lot. That is why I request you wrote on Painters in Dubai as well, so I get to know the authentic information.