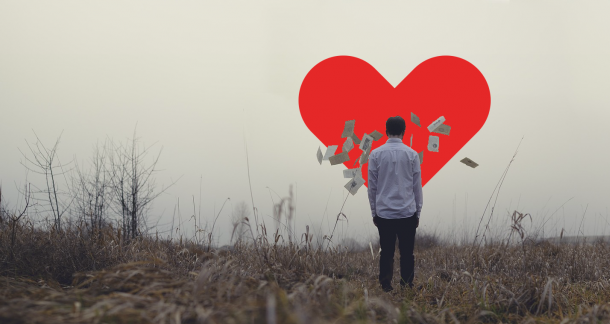 I’m not going to waste time on anyone looking to disagree with the general premise: Men don’t read romance.

Yes, SOME men read romance. Because if there’s a thing to be done, there’s a guy out there doing it, doing it with gusto, and I applaud his efforts.

But if you know anything about books and readers, you know that romance is not popular with the fellas.

Let’s skip the discussion of whether or not this is true. The interesting part is the Why.

Are Men Afraid to Get Caught Reading Romance?

This is one reason you’ll see pondered in a lot of articles, and the answer is a fat slab of “Nope.” The idea here is that men desperately want to read romance, they just haven’t figured out a way to do it on the sly.

You can use an ereader and read whatever the hell you want without anyone being the wiser, which is something lots of romance and erotica readers figured out a decade ago. Even the most dunderheaded of men could do the math on this one. Give us at least that much credit.

This is another reason I saw thrown out more than once. Basically the world telling us a man doesn’t read romance, and therefore I choose not to read romance. At the risk of attacking a very credible, academic-y sounding idea that launched a thousand theses, I’ll present to you a counterpoint: as you age, you really don’t give a shit. Structural Misogyny might be why young men don’t read romance, but if you’re a more seasoned man, one who’s given in to a boss at the expense of your pride more than once, one who’s been shat upon by a baby that you made on purpose because that seemed like a good idea, one who has abandoned brown liquor for neon alcoholic Slurpees because that’s what you like, one who has severely strained a muscle picking an orange up off the floor—I can tell you from experience, the world is very helpful in shattering your ideas of yourself as a manly man. Me reading romance novels would be far from the least manly thing about me.

Besides, look at it this way: if we decide the problem is structural misogyny...then what? Solve that and guys will be snapping up romance?

There aren’t a lot of dudes writing romance.

People like to hear from writers that look and sound like them. This is not groundbreaking information, just something that doesn’t come up often for men. Men aren’t underrepresented in many realms.

Reading a romance and not liking it would be like me seeing The Emoji Movie and being unimpressed. At no point in the design process of The Emoji Movie was anyone like, “Do you think this will work for drunken guys in their late 30’s who stumbled into the wrong theater and finished half a tub of popcorn before they even noticed?”

If you’ve ever dabbled in Romance Twitter, holy shit. Based on how intense things get, you would think that these writers are a team of offshore oil rig roughnecks attempting to save the planet from a gigantic goddamn asteroid.

The professional associations and conferences, the drama, it’s all a little TMZ for my liking. I just don’t give a shit what someone said to whoever about so-and-so’s book. I can’t muster concern over the statements made by RWA regarding the latest scandal about whatever.

I think that whether or not most involved would admit it, the drama outside the books is part of romance, part of its appeal. I’ve never understood this stuff. I’ve never read a People magazine. Lots of guys would tell you the same.

It’s a very common refrain: “You should read more romance novels. You might learn something.”

It’s a cute saying, so I can see why it’s so popular. But it’s...kinda bullshit.

I didn’t learn anything. I never even figured out why someone would attach a bayonet to a rocket launcher. Seems impractical.

People will automatically rebel against anything they’re doing because they’re told, especially when it comes to something like leisure reading. If you tell guys to read romance, they won’t. No matter how snarky you make it. I mean, how’s that working for you so far?

Should Men Just Jump In?

Some might feel the answer here is simple: Men just need to get used to reading romance. But that answer addresses the individual reader rather than the overwhelming reality of what’s published, who it’s intended for, and how it’s marketed. It’s an industry saying, “Instead of changing what we offer, you should change what you like.”

This answer works fine if you don’t give a shit about men reading romance. If you’re like, “Whatever. They can read about that guy, Derk Hole or whatever, the submarine Indiana Jones guy,” then yeah, it doesn’t matter. But if you want men to pick up romance, if you think it would be a good thing, the answer isn’t going to be about men abandoning their personal tastes.

If you want guys to get into it, give them something by a guy, for a guy, and that goes pretty far to reach a male audience.

The form of romance hasn't been appealing to men for a long, long time. Exaggerate what you think the correct form of a romance for men would be, see what happens.

Look to the Golden Years

Listen up, romance writers. The doorway into the world of men is right in front of your face. Provided you’re reading this at 8 am in a Denny’s: Old Guys.

Old guys do whatever the fuck they want. They dress like people who’ve come through a timewarp. They carry their phones in leather pouches outside their pants. They hang out at Panera or McDonald’s all morning drinking slightly discounted coffee and talking about how narrow the lanes in town seem lately, which is probably why there are so may scuff marks on the sides of their Buicks(!) These guys don’t have fucks to give, and if they were interested in romance, they’d read it. In fact, they do. These are the guys who read those slim paperback westerns, which are DIRTY. You probably didn't know it, but if you bought your grandpa one of those Longarm books, you should've bought him some lube and tissues to go along with it. Because damn.

You get the old guys, then you get their sons who are curious what the hell dad is asking for this Christmas. Then you get the hipsters imitating the old guys. Soon enough, dudes are reading romance all over the place. And all because you saw the potential in an broken down elderly man sitting in Wendy’s drinking coffee at 6:30 am every weekday.

The titles are silly, the characters are silly. They get you in the door with a laugh. The jokiness says, "Welcome, brother. It's okay if you don't take this seriously. And if you laughed, hey, you might've found a place you belong."

You can read a 35-page story, very low commitment.

Don't do what Dr. Tingle does. That's pointless. He's already doing it perfectly.

Pay attention to what's different about what he's doing. Because if there's one romance author that guys know by name, it's Doc Tingle.

I really liked this article and found it to be surprisingly thought-provoking. It's an excellent question in of itself and a lot of the answers are interesting. I think the entire concept of why men don't read romance (or watch romances movies or shows) is one that can and should be explored in much more detail a book or documentary.