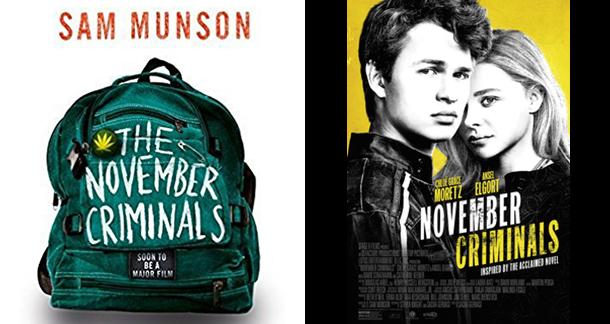 Who among us didn't come of age as a criminal? Wait, that can't be. No, no, you were a criminal too. You just might not realize it. Whether it was that pack of gum you stole in fifth grade or the test you cheated on to pass math in junior high, you're a criminal just like me. Just like us all.

Of course, the degrees of crime in which we all participated varied, but there is almost universally some transgression during our formative years that strips us of the perfection our parents once hoped for. It might not be stealing from the mall and selling the products at school (*Looks around*). It might not be insurance fraud scams (Who the heck did that?!). It might not even be a crime we committed. Regardless, minor or major, criminal acts tend to shape us when we're young. Which is why coming of age crime stories work so well.

With the movie adaptation of Sam Munson's The November Criminals hitting theaters this month (it has been available to stream since November), it felt appropriate to explore just what it is about placing young people in terrible, criminal situations that helps drive a good coming of age story. First, it's probably best to define what I mean by "crime" in this context.

Coming of age crime stories don't strictly have to be about crime. They are not necessarily noir. These stories simply have some criminal element in them. They have some illegal activity that the main characters (young adults or children) interact with. So, with that definition, let's test your knowledge.

A good story doesn't ever truly end. It finishes with a new opening.

Which of these stories (there can be multiple) fall into the coming of age crime bucket?:

You might be tempted to say all of them, but I'm going to throw out the strictly supernatural. So, IT is gone. Stranger Things gets a pass, however, because aside from the creepy Upside Down and the super powers, the government is doing some pretty damn illegal things and the kids get mixed up in it. Ok, now that you're thoroughly primed, let's look at The November Criminals and explore coming of age crime stories as a whole.

The November Criminals follows Addison Schacht, a high schooler who is a little too philosophical regarding his own place in the world. Schacht, a criminal in his own right, uses this philosophical understanding and a sort of young adult reckoning of his past to help drive him (intentionally or not) towards an investigation of the murder of a classmate.

The trope here is that kids do dumb things, but the story is actually about how kids change, how they grow up almost in an instant when placed in a criminal environment. Both the crimes the young protagonist commits and the investigation into the ultimate crime against his classmate are mechanisms for making him grow up faster than we would otherwise expect a teen to.

And that is the key to why these types of stories work so well. We've long had the Updike-style (Updikian?) coming of age story. We've had the literary fiction versions of kids becoming adults, or coming close to adulthood, at least. We've also long had the dystopian YA coming of age—the stories where the children become adults because they have to fight for civilization itself. And sure, we've always had coming of age crime stories. I even referenced a couple older ones above: The Body and The Outsiders. But what makes this specific subgenre of stories work so well is the versatility.

In crime, there are nearly limitless storytelling possibilities. There are government conspiracies and drug crimes and gang violence and home violence and alcoholism and bank robberies. There are kidnappings and larceny and sabotage and financial crimes. There are countless ways to place a young adult in a bad situation and make them figure out the world—figure out who they are.

The November Criminals uses two sides of the criminal coin—the protagonist's crimes and the investigation of another crime—to force growth and understanding and revelation. While not the perfect novel by any stretch, Sam Munson captures the heart of why coming of age crime stories work.

We care about children. We want them to be safe. So, we are immediately invested in the outcome. Place a child near a criminal element and we get angry. We are angry at the child. We're angry at the adults who put the child in that situation. But that anger quickly fades as we find ourselves rooting for the child's escape.

If there is one.

The point is, when a child comes of age in a criminal environment, they don't just become an adult. They become an adult that can walk one of two paths. We root for the child to overcome, to grow up and fight the evil they were forced to deal with as a child. But that doesn't always happen. And that's what's so compelling. We don't know how these characters will ultimately turn out in most cases. We're left at the end of a novel or movie with a resolution to that particular story, but not a resolution to the character's story. So, we fill in the timeline. We create a world. Does the protagonist become a mob boss when she's older? Does the little kid who watched his dad blow up a bunch of office buildings become an arson investigator? Does our heroine ever make it out of jail, lesson learned?

A good story doesn't ever truly end. It finishes with a new opening. And that is what coming of age crime stories provide us as readers. A conclusion we can only really form in our minds.