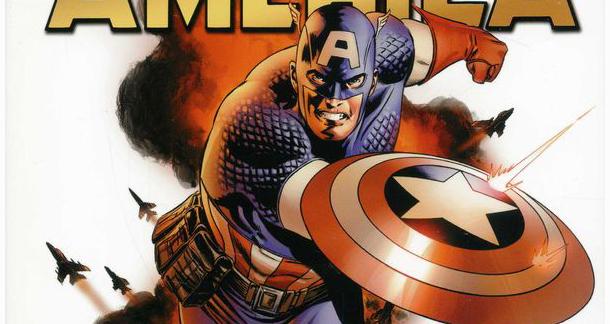 The next villain Captain America will be facing on the silver screen is so badass they named the movie after him. Even though he’s a relative newcomer and mostly unknown outside of comics, Marvel could not have picked a better second-movie antagonist. The mysterious Winter Soldier has everything we love in a bad guy—he’s a powerful killer cyborg with pale skin, dead hollow eyes and a black facemask. He’s basically Darth Vader with a mullet, and he fulfills two of the most beloved archetypes in the history of supervillainy: he's the dark reflection of our hero, and a representation of our hero’s failures. So who is this guy? In case the trailers have not made it abundantly clear already, spoilers for decade-old comics ahead.

The Winter Soldier is basically the Soviet Union’s answer to Captain America, an enhanced covert wetworks operative who has been assassinating important people for decades. The Russians keep him on ice between hits, defrosting him only when there is a target to kill. He was created and trained by Department X, where he met and had a brief romance with Nastasha Romanova, the Black Widow. The Winter Soldier is deadly and invisible, capable of infiltrating the SHIELD helicarrier single-handedly, and even defeating Wolverine one-on-one. He is fast, strong, and a superior fighter like Cap, and his career as a person of mass destruction in service to his state provides an unsettling glimpse of what could easily have been the future of America’s first super-soldier.

Amid all the amazing action, [The Winter Soldier] is really about a struggle Captain America can’t punch his way through—a battle with his own convictions.

All the greatest superheroes have had to fight evil versions of themselves at one time or another. Superman had Ultraman, Batman had Bane, and Tony Stark has every guy who ever decided to solve his problems by building a suit of armor. But the Winter Soldier is more than just a dark “what if?” He represents Steve Rogers’ greatest failure.

In the superhero community there is no sorer subject than the failed sidekick. Comrades fall and rise, only to fall again, girlfriends and children are murdered to motivate heroes into action, and entire cities full of people get vaporized just so some villain can make a point—these things are to be expected, part of the job. What our heroes never see coming is losing one of their own to the dark side. Sure, everybody’s had a brainwashed weekend or been mind-controlled at least once, but it’s rare that a young and hopeful hero turns from the light. Inspiring young people to stand up for truth and justice is what superheroes are best at, right after punching colorfully masked thugs through buildings. How could a kid with the greatest internship opportunity ever possibly go bad? Just ask Batman about Jason Todd. The ill-fated second Robin still haunts him to this day. The warning signs were there even before the Joker brutally murdered him—the kid had attitude for days and often refused direct orders. He enjoyed the violence a little too much, and he may or may not have dropped a guy off a building. When a mighty retcon tore through the DC Universe, Todd came back to life and reinvented himself as the Red Hood, a vigilante that was not shy about using guns and killing lots of people with them. Todd’s descent into darkness is proof that Batman is not always right, something the Dark Knight still struggles to accept.

Bucky Barnes was Captain America’s kid sidekick during World War II. In the comics, he sacrificed his own life to throw Cap clear of an explosion. Unlike most superheroes, Bucky actually stayed dead, and Steve was never able to forgive himself. Steve wasn’t comfortable being a symbol that people would give their lives to defend—that was the exact opposite of the reason he enlisted in the first place. He always saw Bucky’s death as his fault, a reminder that no matter how powerful he was, he couldn’t save everybody. But as Brubaker slowly revealed during his epic run on the series, a Soviet sub had recovered and repaired Bucky’s remains and then brainwashed the amnesiac child soldier into service. Nobody, not even Nick Fury, suspected that the shadowy assassin SHIELD was pursuing in the present was actually Cap’s oldest friend. Learning that Bucky had not only died for him, but also been shanghaied into service by the enemy shakes Cap's confidence in everything he believes in. Despite orders to take him out, Steve still wants to save his friend, and this forces him to ask some tough questions. Are his orders more important than his fellow man? Is he taking orders from the right people? Is duty more important than doing what’s right? Is he really a superhuman force for justice, or just another living weapon? It was easier to fight evil when it wore a Nazi uniform and he knew who to hit. But modern espionage is trickier, where terms like “friend" or "foe” lack a clear definition, and bad guys play for both sides. Watching the time-displaced soldier figure out how to operate in the moral grays of contemporary covert ops functions as a coming-of-age story for the eighty year-old character, in which the old war dog finally learns some new tricks, finds his new place in the world, and then ultimately masters his new domain.

The Winter Soldier is a great thriller full of lore about the history of spycraft in the Marvel Universe, which can get pretty insane. Reading it will introduce you to tons of forgotten or rarely seen super-spies from Marvel history, and hopefully the upcoming Black Widow movie will explore the secret agent sphere further. But amid all the amazing action, it’s really about a struggle Captain America can’t punch his way through—a battle with his own convictions. The trailers and preview footage from the film suggest that we might actually see Steve confront and overcome his limitations in an effort to be a better hero, which is more than either Iron Man 2 or The Dark World managed. Even if the movie is terrible, the source material certainly isn’t. Highly recommended.