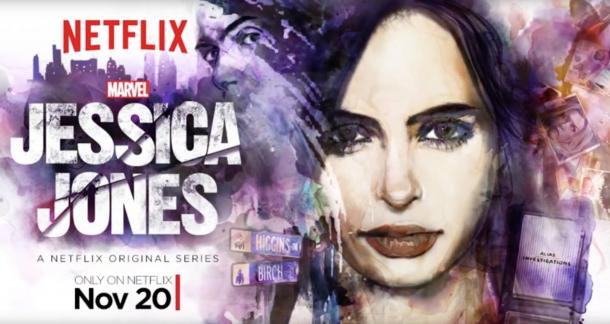 With the first full trailer finally available, the Internet has been abuzz about Marvel’s latest Netflix offering, Jessica Jones. Similar to their surprise hit Guardians of the Galaxy, the show centers around a character that is mostly unknown outside of the comics. It’s a pretty bold move, considering Jessica is even lesser-known than the Guardians once were, having rarely cameoed in other Marvel media. And even within the world of the comics, Jessica isn’t a big name in superheroism. So who is this Jessica Jones? And why should you care about her show? I’ll tell you.

The main source material for the first season appears to be Jessica’s series Alias, which chronicled her adventures as a private eye with superpowers. Much like Daredevil, Jessica got her powers from a collision with a truck carrying radioactive chemicals, because drivers in the Marvel Universe apparently have no idea how to properly secure cargo. After a coma, Jessica awoke to find she had super strength, enhanced durability, and flight, though not a world-shattering amount of any of them. She can beat Captain America at arm wrestling, but can’t stop a speeding train. While she can survive being thrown through a brick wall with only a few bruises, she’s not quite sure she’s bulletproof. And although she can fly, that doesn’t mean she knows how—she admits she never really mastered landings, which is why she sticks to just jumping really far. But unlike most Marvel heroes, her abilities are not what make her such a compelling protagonist. Possible spoilers for the plot of the show beyond this point, so avert your eyes if you care about a virginal viewing experience.

Jessica Jones is rather unique in the world of Marvel, and indeed all of superhero comics, in that she is an ordinary person who simply happened to get powers. It might seem contradictory to call a woman capable of lifting a car and leaping buildings ordinary, but let me explain. Typically, a person who discovers they have powers immediately decides they must use them to either save or destroy the world. In comic books, you’re a hero or a villain, and while your loyalties and motivations may shift depending on the writer, you will commit the majority of your time to fighting the other side. Jessica Jones tried that, complete with a costume perfect for an ‘80s pop band and a moniker to match (Jewel), but it didn’t work out so great. She never saved the world, or even the city, and the biggest bad guy she managed to take down was the Owl. Then she encountered a villain that was simply out of her league, the mind-controlling Purple Man, and she was his favorite victim for almost an entire year, forced to do terrible things until he sent her to fight the Avengers and she finally got some help.

Jessica serves as a reminder that heroism comes in all sizes. You don’t have to save the entire world, or even a life, to be a hero.

It’s not surprising that Jessica retired from costumed vigilantism after that—that’s what a normal person would do. But she also didn’t give up crime-fighting entirely. She became a private detective, a line of work in which her powers provide a useful advantage, but are not strictly necessary. Which is probably what most of us would do with superpowers. Why risk life, limb and sanity fighting killer robots and alien monsters as a C-list superhero when you can be a truly amazing detective instead? No one ever tells us this, but sometimes part of growing up is abandoning your dream, or at least scaling it down to something more realistic. Think of all the wannabe race car drivers that become mechanics, all the star athletes from school that end up coaching, and how many aspiring screenwriters eventually settle for teaching English. It may not be glamorous, but if you’re good at it and it pays the bills, that’s often enough. The story of Jessica Jones is a refreshing breath of realism in a world that is frequently fantastical.

Of course, Jessica has tried to stage a comeback more than once, under numerous names. She was even a member of the Avengers for a time. But she always reaches a point when she remembers why she quit in the first place, and quietly vacates the spotlight. She wants to help people, but the stakes for a superhero are just higher than she’s comfortable with. While extreme self-sacrifice is lauded and even expected in superhero comics, real people are not always willing to put absolutely everything on the line for the sake of justice, integrity, morality, etc. And that is totally acceptable. How many of us would actually put the fate of the world before ourselves and our families? Not Jessica Jones. As she has often told her superhero husband, Luke Cage, he has her love and support, but standing up for what he believes is right is NOT more important than the safety and well-being of their daughter. But she’s not just a window into the civilian consequences of superpowered conflict. Jessica also serves as a reminder that heroism comes in all sizes. You don’t have to save the entire world, or even a life, to be a hero. Sometimes it’s enough just to help someone who needs it. That’s pretty much unexplored territory in the realm of superhero adaptations, and should make Jessica Jones an intriguing series to watch.

Jessica Jones vs. Sansa Stark: Rape Culture in Entertainment, and Why We Should Talk About It