When Peter Met Tony: The Apprentice/Mentor Relationship Between Spider-Man and Iron Man 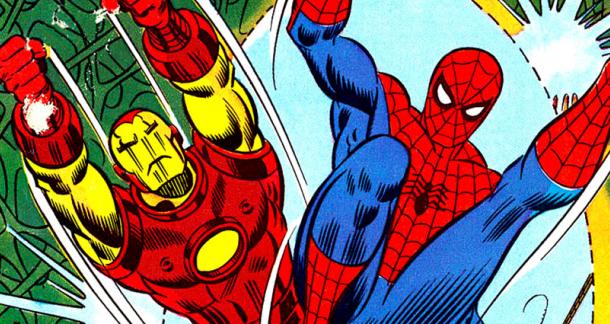 Peter Parker and Tony Stark haven’t always been so close. From his earliest days Spider-Man was trying to be an Avenger, but couldn’t quite pull off convincing the guys he was worthy. But a little over a decade ago, J. Michael Straczynski decided that there was ample ground to build a relationship between the two characters, namely that of mentor and apprentice. Spinning out of the pages of Brian Michael Bendis’s New Avengers that had Spider-Man join the team as a full member for the first time, Straczynski emphasized the friendship between the two characters in The Amazing Spider-Man, starting with issue #519.

Spider-Man, in both his superhero and civilian identities, is a character that has from the beginning been envisioned as aspirational and in need of father figures

Almost from day one Spider-Man was a character seeking association with a greater whole. Amazing Spider-Man #1 (1963) sees the titular character attempting to convince the Fantastic Four to let him join, but is rejected. A year later, in December 1964, he appeared in an Avengers issue to fight a Spider-Man robot sent back from the future by Kang the Conqueror. There he is denied a spot on the team. Two years later in The Amazing Spider-Man Annual #3, the Avengers try to test Spider-Man to see if he’d fit in, but the Webslinger ends up fighting all of them, including the Hulk. Ultimately he decides for himself that it’s not a good idea and backs out. There were several more encounters over the years, including Spider-Man gaining a trainee status and reserve membership in the ‘80s. But it wasn’t until New Avengers #1 in 2004 that Spidey finally went big time.

It’s the 21st century’s conception of Spider-Man’s relationship with the Avengers that the new movie, Spider-Man: Homecoming, is adapting. The first Spider-Man solo movie with the character since introduced into the Marvel Cinematic Universe in Captain America: Civil War, it sees him as a teenager again dealing with the trials and tribulations of balancing school, a love life and crimefighting. And helped along the way by Robert Downey Jr.’s Tony Stark, who has equipped the young Webhead with an advanced suit that forms to fit the user, has heads-up display, hundreds of combinations of webbings, and any other assortment of gadgets. And most importantly, Tony assumes a mentor role with Peter aspiring to become an Avenger, and Tony guiding him but also shutting him down when he gets in too deep.

The comics follow a similar trajectory, but with Peter in a very different time in his life. In the storyline “Skin Deep” from The Amazing Spider-Man, Peter confronts a former classmate, Charlie Weiderman, that gains incredible abilities during a lab accident and blames Peter for his troubles. Bullied in high school, his life is a dark mirror of Peter’s, and now encased in a skinsuit of the incredible metal Vibranium (that makes up Captain America’s shield) he seeks revenge. One side effect of this is the destruction of Peter and Mary Jane’s apartment, and Aunt May’s house in Forest Hills.

After this traumatizing event that culminates in issue #518, Peter, his Aunt May, and wife Mary Jane move into Stark Tower, the skyscraper in the heart of Manhattan that is both the headquarters for Tony's company and this iteration of the Avengers, in the next storyline called simply “New Avengers” that covers issues #519-524. Tony felt a degree of responsibility considering he granted Charlie the original funding for his project and provided Spider-Man with the atmospheric chamber that ultimately defeated the villain. Here they live with the New Avengers, including Captain America, Luke Cage, Wolverine and Spider-Woman. Aunt May also takes up a flirtation with Tony’s butler Jarvis. This is a definite change of pace for the Parkers who previously struggled to get by, fighting bills and tragedy as much as supervillains.

Peter, here portrayed in his mid-20s and previously a high school science teacher, becomes Tony's assistant and establishes close ties with Iron Man and Spider-Man. The result is the Iron Spider, a suit of armor not unlike Iron Man that enhances Peter’s abilities, utilizing three extra mechanical arms that spring out of Spider-Man’s back and involving all sorts of sensors and capabilities, while also allowing Spider-Man to maintain his natural spider powers. It is also red and gold, mimicking the Iron Man armor. 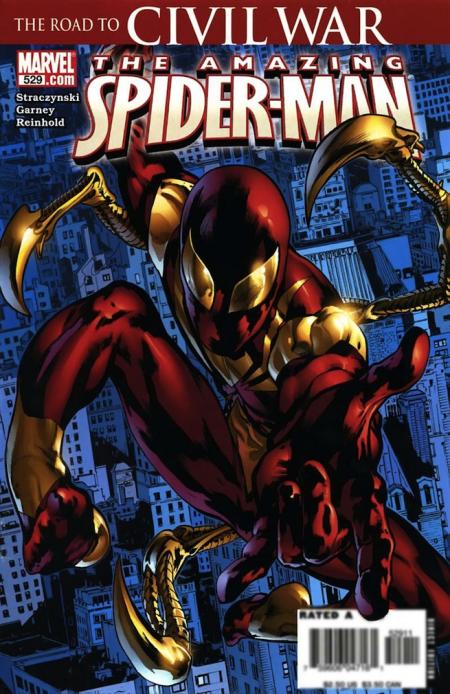 The Iron Spider suit is first introduced in issue #529 and featured prominently from 2006 through to 2007 just before and during the Civil War storyline. Much like the movie released last year that introduced Spider-Man to the MCU, the character takes Tony’s side during the event that sees government legislation, in the comics the Superhero Registration Act and in the movie the Sokovia Accords, forcing super-powered beings to officially sign on as government employees. Peter is so loyal to Tony at this time that he unmasks publicly at a press conference, something that will have lasting repercussions. After a battle that results in the death of Goliath, caused by a clone of Thor, Spider-Man switches sides and joins up with Captain America on the anti-registration side. Consequently he ditches the Iron Spider armor and in the decade since it has only made sparse appearances.

Fast-forward to today and the relationship between Tony and Peter is very different in the comics. After Secret Wars in 2015 kicked off a fresh start for Marvel Comics (that is totally not a reboot), Amazing Spider-Man and The Invincible Iron Man both kicked off with new #1 issues and very different status quos. After a long and convoluted storyline involving Doctor Octopus taking over his body, Peter has actually finished his doctorate and started his own business, Parker Industries, that is dominating the market. Tony, on the other hand, has been suffering with his stock plummeting and personal issues culminating in him, during the events of Civil War II, ending up in a coma and being replaced by Riri Williams, the new superhero Ironheart. But prior to that, Peter and Tony found themselves as industrial and personal rivals, with even Peter’s ex Mary Jane working for Tony as his personal assistant.

And within this new status quo, that appears in Merry Marvel fashion to be getting upset again with the upcoming new series Peter Parker: The Spectacular Spider-Man restoring things to how they used to be relatively, Peter has had a new costume for the last two years (redesigned by comics stalwart Alex Ross) that has a sleeker, more modern look and emphasis on tech with a glowing spider on his chest. This suit is equipped with all sorts of gadgetry, including many different kinds of web combinations. It seems the filmmakers behind Homecoming have synthesized aspects of the earlier relationship between Tony and Peter during the comic book Civil War era and the current status quo with Peter using his own company’s finances and resources and adapt his crimefighting in an all new high-tech fashion.

But what’s most important and appropriate is the mentor angle, as Spider-Man, in both his superhero and civilian identities, is a character that has from the beginning been envisioned as aspirational and in need of father figures. After all, his parents died when he was very young and the death of his Uncle Ben, for which he feels responsible, is the catalyst for why he became a superhero in the first place. From that first meeting with Reed Richards in Amazing Spider-Man #1 a precedent was set where, although Peter is a genius, he has looked up to the many other brilliant minds in the Marvel Universe, including Hank Pym, Bruce Banner and, of course, Tony Stark.

This is an element that the previous movies have picked up on to a large extent, but with the twist that it’s always villains. In the first movie Norman Osborn, the Green Goblin, tries to take Peter on as his apprentice in both their guises. This culminates in the moment during their climactic battle when an unmasked Goblin says to Peter, “Give me your hand. I’ve been like a father to you. Be a son to me now.” In Spider-Man 2 it’s Doctor Octopus, whom Peter interviews for a paper he’s writing at school and immediately befriends. In The Amazing Spider-Man, Peter briefly works with Dr. Curt Connors at Oscorp when he discovers Connors used to work with Richard Parker, Peter’s father. Peter gives the one-armed Connors Richard’s “decay-rate algorithm,” which leads to Connors mutating into the monstrous lizard.

But in Spider-Man: Homecoming, the mentor-apprentice relationship is with someone that can absolutely be looked up to, even though he does have his flaws and moments of weakness. Going just by the previews, it appears that the dynamic between Tony and Peter picks up from where Civil War left off, with the former equipping the latter to go do some good. But now Tony, perhaps shaken by the injuries sustained by comrades during the airport fight in Civil War, advises Peter to “stay close to the ground.” It appears that after an incident where the Vulture attacks a ferry boat and Peter is only able to save everyone with Iron Man’s help that Tony takes away the suit. With just the webshooters he created on his own and a costume cobbled together with street clothes, Spider-Man has to save the day with a back-to-basics approach.

And that’s wholly appropriate, because in the end Spider-Man is defined by adversity. Things can never be too easy for him, and that means not having the steady guidance of a mentor. From father figures that die to ones that end up being supervillains to billionaire superheroes that are a bit overprotective, the essence of Spider-Man is that with great power comes great personal responsibility. He can get help from others, he can work with others and get advice from others, but in a solo Spider-Man story he must ultimately stand alone. And that makes for great storytelling, as eventually every apprentice must outgrow their mentor.

The Evolution of Brian Michael Bendis as A Writer